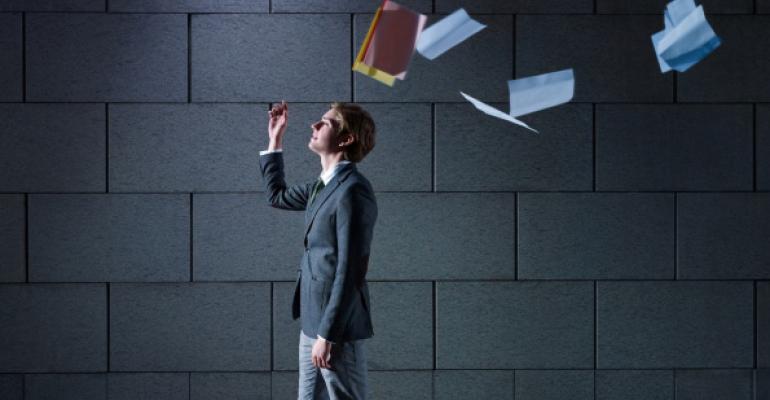 Sometimes, it’s the little things that can drive wirehouse reps to give up on the firm and take their business elsewhere.

All advisors get frustrated with their firms at times and consider jumping ship, but only 22% on average actually change organizations in any given year. Yet restlessness seems to be on the rise. 29% ofadvisers at national wirehouses said they were considering leaving their firms in the coming year compared to 25% the year before, according to a study by Cogent Research.

What does it take to reach the breaking point? According to the Cogent study, “the reasons most often cited by wirehouse advisers for wanting to leave were the opportunity to make more money and a desire for greater job satisfaction. “  Seems painfully obvious, but those are broad categories; “job satisfaction,” after all, is a subjective experience.

Whether it’s a minor administrative incident or a business-altering firm mandate, there are moments in the lives of FAs where they say to themselves, “That’s it – that’s the last straw.  I need out.” Following are five examples of “back breakers” from wirehouse advisors who have either accelerated their once casual exploration process or already left their firms. These are actual brokers, but their names have been changed to protect their anonymity.

1.      John’s firm told his Client Service Associate (CSA) that she would no longer be paid for extra hours worked since she reached a pre-set limit on overtime. Now John’s work is falling behind, clients are agitated, and his CSA has threatened to quit.  While John had previously been content doing some “armchair exploration” about what other firms could offer his team and clients, it was this seemingly small obstacle – driven by bean counters in far away offices – that led him to more actively explore his options in several different channels, certain that it was time to leave.

2.      “Managing to the lowest common denominator” was the unspoken message Phil and his large West Coast wirehouse team constantly heard from management. But there were two incidents that eventually led him to start his own RIA. Late last year his team was putting together a targeted print marketing piece. It featured a professional photograph of the members of the firm at an outside event. As with all outside communications, the ad was reviewed by the home office. When it came out, it featured a stock photo with actors in place of his team members.  After receiving confused calls from clients and friends wondering about his new partners and assistants, he went to management and was told that it “had to be done” that way for compliance and cost reasons.

A few short months later after returning from several days away at client visits, Phil came back to his office and discovered that the sign he had made for his office door, touting the team’s name, had been removed.  When he asked why this happened, he was told “if we let you have your own sign, we would have to let everyone have one.”  Soon thereafter, Phil started the due diligence process; now he and his team use the same sign he had designed on the door of his new office.

3.     Steve didn’t set out to become the go-to advisor for the gay and lesbian community. But after a few key referrals over time, the client base started to grow exponentially. He recognized this group was largely underserved and developed a marketing plan. He wanted to focus on more sophisticated planning issues and charge consulting fees for the work. He needed access to superior thought leadership and legal counsel that had the knowledge about newer estate planning and trust strategies. He wanted to bundle these and other “high touch” services such as bill paying, concierge services and consolidated reporting into his own multi-family office. Despite his entrepreneurial ambitions, management at his wirehouse wouldn’t give him the leeway. He came to realize that he needed to be in a more nimble and progressive environment.  Steve left his firm and “tucked into” an existing RIA practice that welcomed him and his clients and allowed him to build out the niche consulting business.

4.      Donna was a top producer at her firm with half of her practice on the institutional side; most of her assets were held DVP (delivery-versus-payment). One day firm management decided that they would significantly reduce payouts on DVP business resulting in the loss of half of her income. While Donna was largely content in all other respects, this sudden decision was the catalyst that pushed her out. She is currently exploring her options in the wirehouse world to compare policies and payouts on DVP business, as well as investigating the independent space to determine if she would have access to the same or better platform and technology to serve her clients.

5.      Mitch built his practice largely by conducting client seminars and hosting a local radio show. His manager told him that new marketing rules meant he could no longer do his radio show.  Shortly after hearing that, it started taking longer and longer for Mitch to get his seminar topics and format approved by compliance. The last straw came for Mitch when he was forced to cancel a seminar at the last minute because the firm wouldn’t approve a significant portion of the content. Mitch has since joined an independent B-D where he has far more leeway to market his business in order to grow faster.

In most cases, a single frustrating event is not enough to drive an advisor out the door.  But, it is the sum total of multiple issues plus a single catalyst that can force an advisor to pick up stakes. As with the proverbial camel blessed with a broad back and able to withstand great burdens, when that final straw falls, nothing will stop the advisor from taking the necessary steps to find a new home.