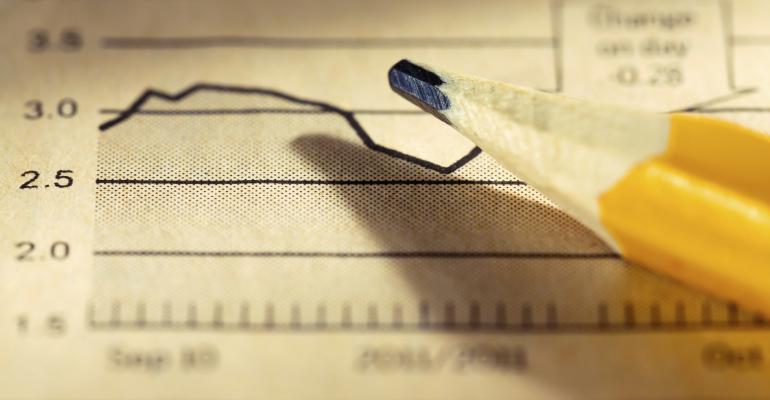 The latest edition of the Fed&rsquo;s Beige Book indicates that the negative headwinds that have held the U.S. economy back over the past five years may be declining. The rebound in our Beige Book Barometer is consistent with the Fed&rsquo;s view that the contraction in economic activity was mostly weather related. We continue to expect that the U.S. economy (as measured by real GDP) may grow at 3.0% in 2014. Uncertainty and lack of confidence around fiscal policy that dominated the Beige Book in 2013 is fading, but health care is still a concern.

The Beige Book is a qualitative assessment of the U.S. economy and each of the 12 Federal Reserve (Fed) Districts. We believe the Beige Book is best interpreted quantitatively by measuring how the descriptors change over time. The latest edition of the Fed Beige Book, released last Wednesday, June 4, 2014, ahead of the June 17 – 18, 2014 Federal Open Market Committee (FOMC) meeting, once again described the economy as increasing at either a “modest” or “moderate” pace, while “prices of both inputs and finished goods and services were mostly steady to up slightly” and wage pressures were “generally subdued.” The modest-to-moderate description of the overall economy has now been used in the last nine Beige Books, and in 10 of the past 11 dating back to March 2013.

To provide a snapshot of the sentiment behind the entire Beige Book collage of data, we created our proprietary Beige Book Barometer (BBB) [Figure 1]. The barometer ticked up to +102 in June 2014 from +87 in April 2014 and +62 in March 2014. At +102, the latest reading is the highest since the April 2013 Beige Book (+112), and more importantly, the barometer is now finally back above the October 2013 reading of +97, which was released just prior to the onset of the harsh winter weather that gripped much of the United States in December 2013 and most of the first quarter of 2014. The +102 reading on the Beige Book Barometer in June 2014 is the second-highest reading in the history of the data -- only the +114 reading recorded in January 2005 was higher. The rebound in our Beige Book Barometer is consistent with the Fed’s view that the drop in economic activity -- real gross domestic product (GDP) contracted at a 1.0% annualized rate in the first quarter of 2014 -- was mostly weather related. In addition, we found that the word “weak” or its variants appeared just 25 times in the June 2014 Beige Book, half the long-term average of 50 mentions. This suggests to us that the negative headwinds that have held the economy back over the past five years may be declining. 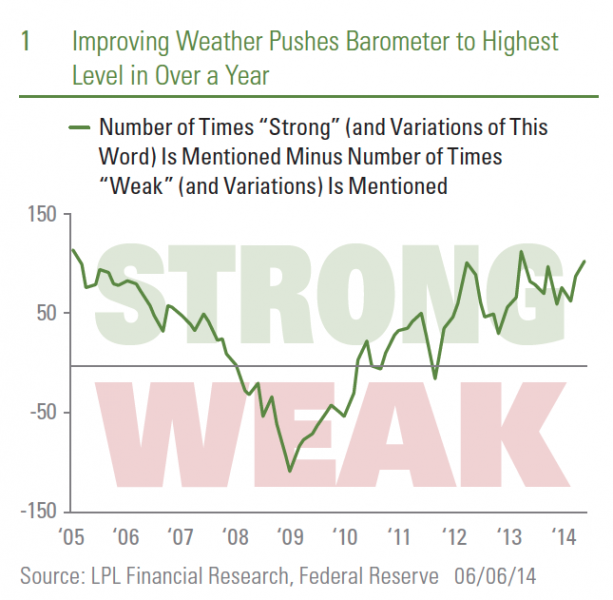 Weather was a big driver of the weakness in the Beige Book in the winter of 2013 – 14, but the arrival of more “normal” weather this spring held the weather mentions to just 35 in the latest Beige Book, with two-thirds of those mentions used in a positive context. Looking back, weather was mentioned 103 times in the April Beige Book, but only about 60% of the mentions were in a negative context; the remaining 40% were in a positive context, in many cases describing how economic activity rebounded after poor weather held down activity in prior months. The 103 mentions of weather in the April 2014 Beige Book compared favorably to the 119 mentions in the March 2014 edition. Note that of the 119 mentions of weather in the March 2014 Beige Book, almost all were in a negative context.

To put the 119 mentions of weather in the March 2014 Beige Book in historical context, weather was mentioned only 48 times in the Beige Book released just after Superstorm Sandy hit the U.S. East Coast in October 2012. Weather was mentioned a total of 61 times in the three Beige Books released during the unusually cold and snowy winter of 2010 – 11. On balance, the 119 mentions of weather in the March 2014 Beige Book -- along with 31 mentions of the word “cold,” 24 of “snow,” and 35 of “severe” -- suggest that the weather’s impact on the economy in the early part of 2014 was widespread and significant. This reinforces our view that the 1.0% drop in real GDP in the first quarter of 2014 was almost entirely weather related.

Looking ahead, we expect the improvement in the economic data to continue throughout the second quarter of 2014. We continue to expect that the U.S. economy (as measured by real gross domestic product [GDP]) may grow at 3.0% in 2014 -- accelerating from the sub-2.0% growth rate in 2013 -- based on the drags from 2013 reversing (tax hikes, government spending cuts, Europe recession) and a modest improvement in business spending, which would simply equal the average pace of real GDP growth since the end of WWII. The data released thus far in the second quarter of 2014 (employment, Institute for Supply Management [ISM], vehicle sales, retail sales, industrial production, Index of Leading Economic Indicators) suggest that the economy may expand at a pace well above its long-term average in the second quarter, a snapback from the weather-induced weakness in the first quarter of 2014. The GDP report for the second quarter of 2014 is due out at the end of July 2014. Please see our upcoming Mid-Year Outlook 2014 publication for details about our forecast for the second half of 2014. 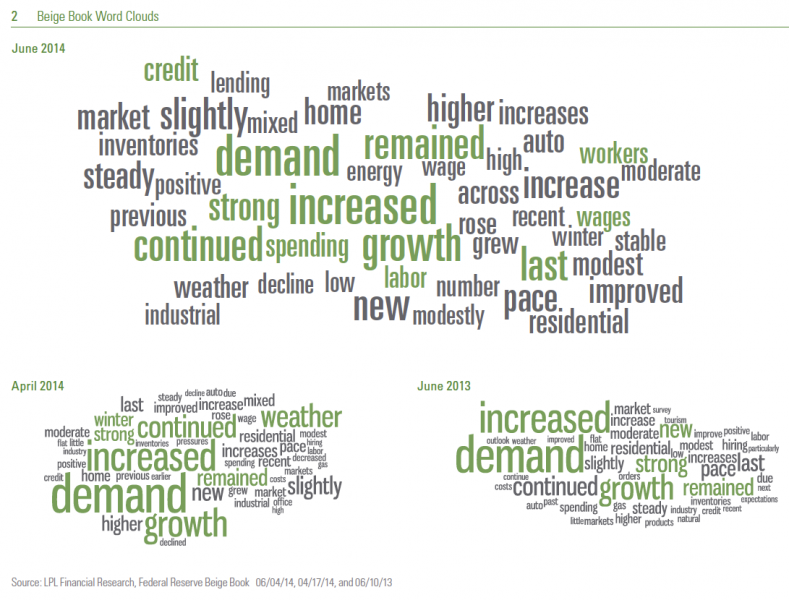 The uncertainty and lack of confidence around fiscal policy (fiscal cliff, debt ceiling, sequester, government shutdown) that dominated the Beige Book for most of 2013 is now clearly fading [Figure 3]. In both the April and June 2014 editions of the Beige Book, there were only 12 mentions of the words noted above, after 18 mentions in the March 2014 Beige Book, and 26 mentions in the January 2014 Beige Book. These words were mentioned 65 times, on average, in each of the eight Beige Books released in 2013. As we wrote in our Outlook 2014: The Investor’s Almanac, we continue to expect concerns over government policy to fade over the course of this year. 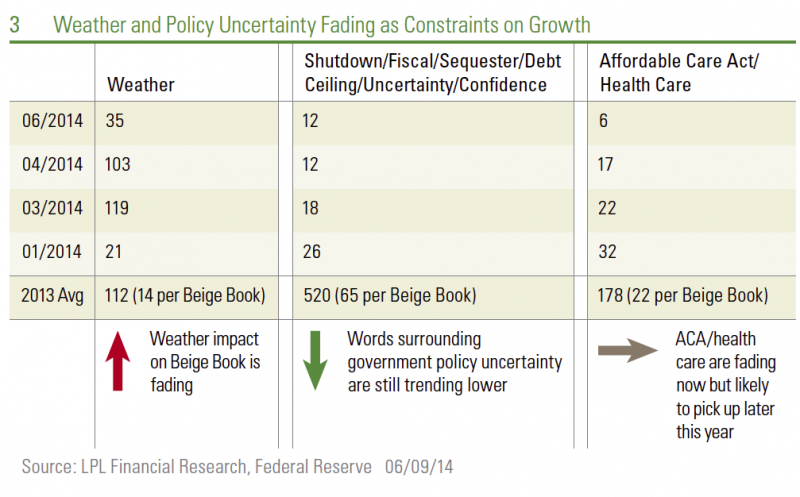 Good weather or bad, the Affordable Care Act (ACA), and health care in general, has remained a consistent source of concern among respondents to the Beige Book, although the impact has faded a bit recently. The ACA (and health care in general) received just six mentions in the June 2014 Beige Book, down from 17 mentions in the April 2014 Beige Book and 22 in the March 2014 edition. On average, the ACA/health care saw 22 mentions per Beige Book in 2013. We continue to expect this topic to appear frequently in the Beige Book in the quarters ahead as businesses and consumers adjust to the rollout of the legislation. The midterm congressional elections and the approach of the start of the open enrollment period for 2015 (November 15, 2014) may cause an uptick in concern around health care in the Beige Book.

How the Barometer Works

Beige Book: How It Works

The Beige Book compiles qualitative observations made by community bankers and business owners about economic (labor market, prices, wages, housing, nonresidential construction, tourism, manufacturing) and banking (loan demand, loan quality, lending conditions) conditions in each of the 12 Fed districts (Boston, New York, Philadelphia, Kansas City, etc.). This local color that makes up each Beige Book is compiled by one of the 12 regional Federal Reserve districts on a rotating basis -- the report is much more “Main Street” than “Wall Street” focused. It provides an excellent window into economic activity around the nation using plain, everyday language. The report is prepared eight times a year ahead of each of the eight Federal Open Market Committee (FOMC) meetings. The next FOMC meeting is June 17-18, 2014.

The word clouds or text clouds on page 2 are a visual format useful for quickly perceiving the most important words in a speech, text, report, or other transcript. They are culled from the Fed’s Beige Books published last week (June 4, 2014), the prior report (April 16, 2014), and the report from a year ago (June 5, 2013). In general, the more often a word appears in a speech, text, report or other transcript, the larger that word appears in the word cloud. The word clouds show the top 50 words for each of the two Beige Books mentioned above. Similar words are grouped together and common words like “the,” “and,” “a,” and “is” are excluded, as are words that appear frequently in all Beige Books (federal, district, loan, level, activity, sales, conditions, firms, etc.).

The Federal Open Market Committee (FOMC), a committee within the Federal Reserve System, is charged under the United States law with overseeing the nation’s open market operations (i.e., the Fed’s buying and selling of U.S. Treasury securities).