/sites/all/themes/penton_subtheme_wealthmanagement/images/logos/footer.png
Recent
Recent
Russian Billions Hidden in US Spur Backlash to Financial Secrecy
May 18, 2022
Macquarie Alum’s GreenPoint Eyes $1 Billion for Real Estate Bets
May 18, 2022
The Stephen and Kevin Show: All About Financial Advisor Podcasts
May 18, 2022
11 Must Reads for the CRE Industry (May 18, 2022)
May 17, 2022
Featured
The 10 Best and 10 Worst States in Which to Retire in 2021
Jul 15, 2021
Poll: 15 Classic Books on Investing and the Markets
Apr 03, 2020
Fifteen Must-Listen Business Podcasts for Advisors
Aug 14, 2020
Celebrity Estates: Jay Leno and Planning for Classic Car Collections
Feb 22, 2022 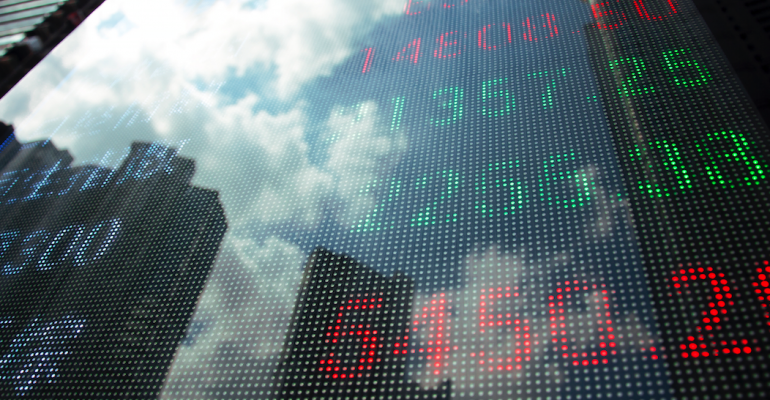 We do not think the first quarter GDP report will be a harbinger of a recession in the near future. &nbsp; We continue to believe the U.S. economy will accelerate in 2014 (relative to 2013) and that GDP will increase 3 percent for the year. &nbsp; The LEI indicates that the risk of recession in the next 12 months is negligible at 4 percent, but not zero. &nbsp;

Could the first quarter GDP report be a harbinger of a recession? We do not think so, and our view remains that the economy will accelerate in 2014 (relative to 2013), and that GDP may increase 3.0% for the year.* In the May 12, 2014 Weekly Market Commentary: The Best Indicator May Be a Long Way From Signaling the Start of a Bear Market, we discussed the yield curve and its usefulness as an indicator in equity bear markets and recessions. The yield curve, defined as the difference in yield between the 10-year Treasury note and the three month T-bill, is one of the 10 components of the Index of Leading Economic Indicators (LEI). However, the Conference Board — the private sector think tank that compiles the LEI — uses the federal funds rate instead of the three month T-bill. (See the nearby box for all the components of the LEI.)

The April LEI is due out on Thursday, May 22, 2014. The consensus of economists as surveyed by Bloomberg News expects that the LEI may have increased by 0.4% between March and April 2014, another signal that the economy rebounded in the second quarter after the harsh winter constrained Q1 growth. 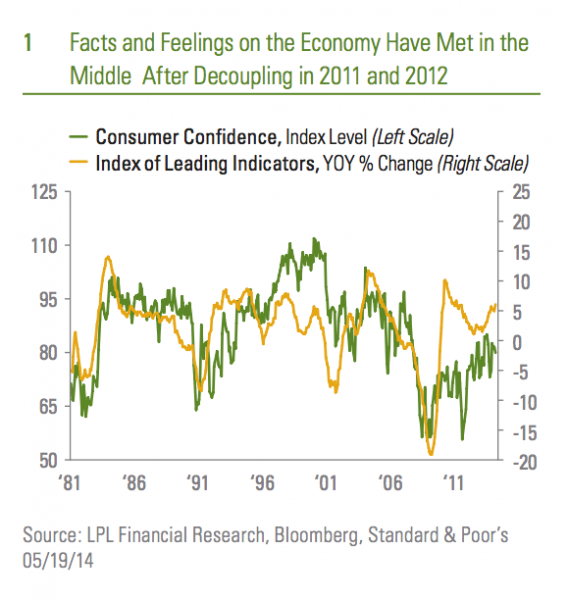 Have You Seen the LEI Lately?

If you have not seen the LEI lately, several components have been changed. However, as before, virtually all of the components of the LEI are known before the report is actually released, so in theory, the LEI itself should not be a surprise to market participants, the media, or pundits. Of course, that will not prevent anyone from ascribing movement in financial markets on Thursday, May 22 to the LEI data, even though the S&P 500 Index itself is a component in the LEI.

In December 2011, the Conference Board made three changes to the LEI:

In the 12 months ending in March 2014, the LEI increased 6.1%. The LEI is designed to predict the future path of the economy, with a lead time of between six and 12 months. Since 1960 — 651 months, or 54 years and three months — the year-over-year increase in the LEI has been at least 6.1% in 191 months. Not surprisingly, the U.S. economy was not in recession in any of those 191 months. Thus, it is highly unlikely that the economy was in recession in March 2014, despite the likely below zero reading on real GDP in the first quarter of 2014. 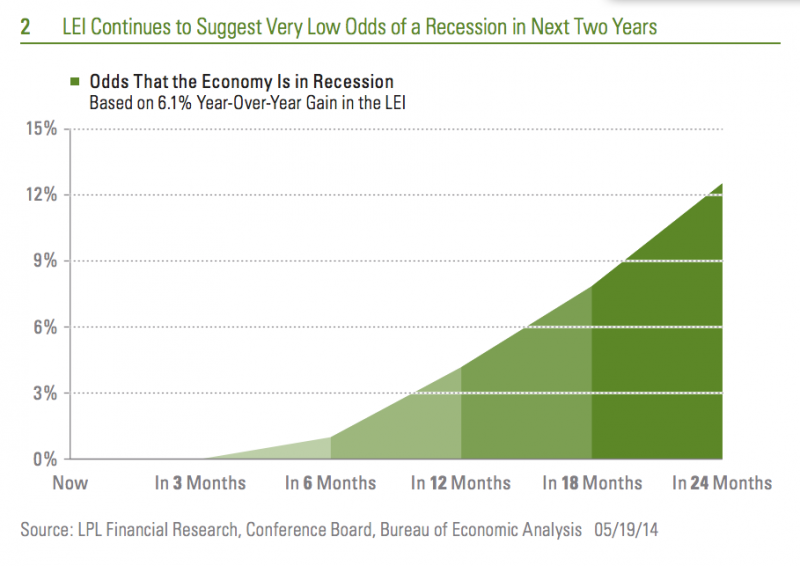 On balance, the LEI report this month may say the risk of recession in the next 12 month is negligible at 4%, but not zero. We would agree. A dramatic deterioration of the fiscal and financial situation in Europe, a fiscal or monetary policy mistake in the United States or abroad, or an exogenous event (a major terror attack, natural disaster, etc.), among other events, may cause us to change our view that the odds of a recession in the United States remain low. But for now, based on the LEI, it looks like we are still in the middle of the economic cycle that began in June 2009.

*As noted in our Outlook 2014: The Investor’s Almanac, our GDP forecast is based upon many of the drags of 2013 fading, including U.S. tax increases and spending cuts, the European recession, and accelerating growth from addition hiring and capital spending by businesses.