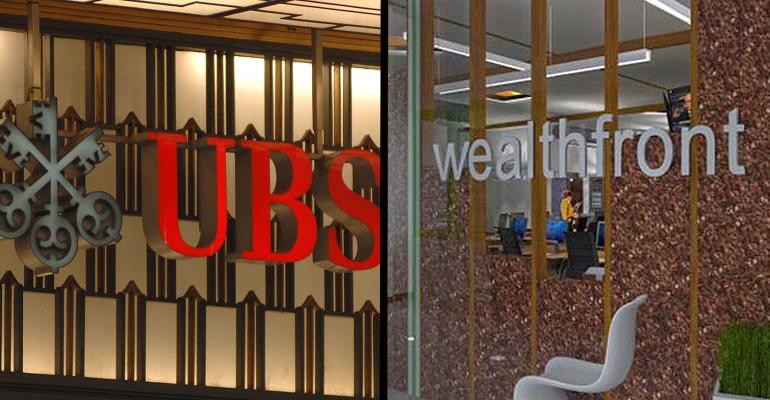 The famously anti-human advice platform is being purchased by UBS for $1.4 billion.

UBS is buying software-only automated advice platform Wealthfront for $1.4 billion, according to an announcement. The deal marks the end of independence for Wealthfront, which was founded in 2008 and stood as one of the original automated advice platforms, or so-called robo advisors. In the more than decade since it was launched (originally as kaChing, a mutual fund analysis company), Wealthfront amassed more than 470,000 U.S.-based clients and more than $27 billion in assets.

The deal will help Wealthfront scale more quickly, Wealthfront CEO David Fortunato said, in an email to clients. Wealthfront’s employees were introduced to UBS management in 2020, when Wealthfront was exploring banking relationships.

Related: Wealthfront Is Exploring a Potential Sale at a Value of $1.5 Billion

“It was clear from the start that we shared the same values and culture,” he said in the email. “You will see no change to your experience or the cost of our service, and you can look forward to benefitting from UBS’s breadth of products, services and intellectual capital.” Fortunato also promised faster innovation and more research.

While UBS has its own wealth management technology, it also has human advisors—some 6,000 of them in the U.S. alone—a category of professional that Wealthfront has famously shunned.

“The hybrid model hasn’t worked at all,” Wealthfront co-founder and executive chairman Andy Rachleff told attendees of the 2020 CB Insights Future of Fintech event. “We’ve been validated in the approach that we take.”

Fortunato said the firm’s philosophy, as well as its fees, won’t be changing with the acquisition. But that apparently doesn't include the firm's stance on hybrid advice.

"Wealthfront’s capabilities will become the foundation of [UBS's] new digital offering, which will also include access to remote human advice," according to the announcement—a change not mentioned in Fortunato's email to existing clients.

Despite the negative stance Wealthfront has historically held on human-tech hybrid advice, UBS sees the deal as a boon for its U.S. business expansion. “Wealthfront complements our core business in the U.S.,” said Ralph Hamers, group CEO of UBS, in a statement. UBS already pairs its advisors with HNW and UHNW investors, he said, and Wealthfront will “enhance our long-term ambition to deliver a scalable, digital-led wealth management solution to affluent investors.”

Wealthfront’s users will benefit from the “thought leadership” provided by UBS, as well as its global reach and “deep products and services shelf,” according to the announcement.

That wasn’t the only mention of products. The deal would give Wealthfront end-clients “even more compelling products and services now that we have UBS as a partner,” according to an email Fortunato sent to clients.

Last year, Wealthfront added crypto investing options to its investment menu, as well as a build-your-own portfolio feature. “Our desire to innovate has not changed,” Fortunato added.

The acquisition all but closes the door on SigFig, said Alois Pirker, director of the wealth management practice at Aite-Novarica Group. As recently as 2018, UBS introduced a SigFig-designed digital advice platform to its U.S.-based wealth management clients.

The future of that platform suddenly looks different. "You can't have two service models," Pirker said.

In 2016, UBS was part of a $40 million investing round in SigFig. At the time, UBS executives deemed buying to be better than building, according to Tom Naratil, president of UBS Americas. UBS was also part of a $50 million funding round SigFig undertook in 2018. "Wealthfront will expand UBS’s existing offering through [UBS's] Wealth Advice Center, which focuses on serving core affluent clients, and its Workplace Wealth Solutions business, which works with employees of corporate clients on equity plan participation, financial education and retirement programs," according to the announcement.

Rachleff’s negative stance on hybrid advice will also go. The co-founder will be retiring after the close of the acquisition, said Kate Wauck, chief communications officer at Wealthfront. Fortunato will continue as CEO of the business unit and the acquisition is expected to close in the second half of 2022.

UBS’s acquisition also narrows the field of potential suitors for Betterment, while increasing the likelihood the firm will be acquired, said Pirker. Morgan Stanley, Bank of America and BofA Securities (formerly Bank of America Merrill Lynch), Charles Schwab, JPMorgan, Empower and Vanguard are unlikely to buy Betterment, he said. Possible acquirers could be Citi or Goldman Sachs, he said.

While the big splash is around U.S. expansion, UBS may also be making a “stealth move” into direct indexing, said William Trout, director of wealth management at Javelin Strategy & Research. “Wealthfront was one of the first firms to launch a direct indexing platform for investors all the way back in 2013,” he said, adding that UBS has been “decidedly silent” on the direct indexing front, as wealth management firms rushed into acquisitions for the technology.

Despite assurances of cultural and philosophical alignment, the integration of Wealthfront into UBS will be a challenge, predicted Trout.

“UBS is evolving under Ralph Hamers,” he added, “but the brand remains strongly associated with the white glove, high-touch wealth management model. One has to wonder how the UBS name is going to resonate with the tech-friendly Wealthfront client.”