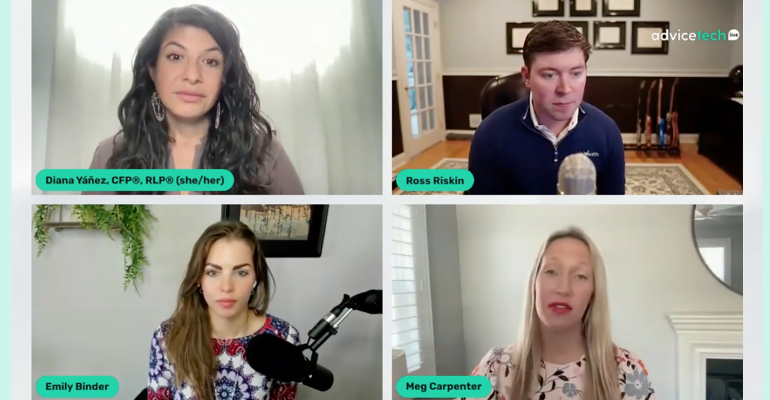 A panel of speakers at the 2022 AdviceTech.Live conference.
Technology

Despite delays and glitches, the third-annual AdviceTech.Live was well-balanced between new tech demos and lively panels, raised $32,000 for financial planning-related organizations, and demonstrated that virtual-only advisor conferences—born out of the pandemic—should be here to stay, our technology columnist says.

Hurricanes affect not just the physical world but the virtual one too.

I saw this first hand as attendees and participants of the third-annual AdviceTech.Live, an online-only advisor technology conference born during the depths of COVID-19 pandemic-enforced lock downs, experienced some delays, tech glitches and a few missing speakers Thursday in the aftermath of Hurricane Ian, which struck the southwest coast of Florida less than a day before.

While the initial welcoming address from event organizer Adam Holt, CEO of Asset-Map, went off without a hitch, the first of four scheduled one-hour long series of tech demos was delayed 18 minutes.

“Thanks to the hurricane we have had some delays,” said Holt. “We’re just trying to get back on track. Will find out post-mortem,” he wrote me via LinkedIn messaging as I sought an explanation. “This is a massive undertaking and has taken hundreds and hundreds of hours to put together." I believe him.

Despite the last-minute curveballs, Holt, co-host Alison Susko, director of partnerships for Asset-Map, and other conference organizers and participants rolled with the punches and kept the party—they do call it a party—going throughout the day. The event is a useful one for advisors in need of new technology or shopping for alternatives to some of the applications they already have, accompanied by insightful conversations from industry leaders around the use of the tools in a modern advisory firm.

This was the third annual AdviceTech.Live event, and my first time attending (Watching? Dropping in? Participating? The nomenclature of the online event still seems fluid). There were 30 sponsors, each with their own virtual booth in the exhibit hall, and a pre-conference estimate of 1,500 participants and advisor attendees, said organizers.

While I kept eyes on the screen the entire day, my focus was specifically on the technology demonstrations. For those that have not seen it, a major component of AdviceTech.Live are 10-minute live demonstrations from, this year, 20 advisor technology companies spread across four one-hour sessions.

In a twist of conventional tech demos, event organizers asked the tech firms not for broad overviews of their platforms, but to focus on features and iterations that had been built in the last 12 months. That gave many of the demos a sharp specificity and focus useful to many of the attendees, most of whom are likely already familiar with the firm's participating, from larger players like Morningstar and Orion, to startups like Hubly, Lasso and VRGL. (Look for another column from me that captures the highlights.)

The technology presented was also expected to address the event’s 2022 theme of "Financial Empowerment through Advice," which they largely did.

But the demands on the tech firms to demonstrate only recent iterations and tie it to a specific theme—a worthwhile ambition of the event organizers—may have led to some inconsistency in the quality of the presentations—some could have benefited with more practice or feedback, others from having supporting slides in addition to the screen sharing. In at least one instance a hurricane-related or other technical glitch prevented the use of visuals. Others tried to present too much, or present too complex of a tool or platform, within the 10 minutes allotted.

Between each demo session were panel discussions, all around the subject of financial empowerment, discussed from various angles by industry practitioners, researchers and academics.

The opening panel discussion—on what advisory firms can do to drive consumer empowerment—intended to be a four-person panel discussion but ended up a thoughtful one-on-one between moderator and financial advisor Lazetta Rainey Braxton (a Wealthmanagement.com contributor) and Manish Khatta, president of the TAMP Potomac Fund Management.

Panelists Craig Iskowitz, CEO of the Ezra Group, and Penny Phillips, co-founder and president of Journey Strategic Wealth, never made it to screen.

It was unclear whether this was, ironically, a technology issue or something else.

“I sent the other two panelists a virus,” said Khatta laughing and trying to make the most of the situation.

Industry stalwarts Michael Kitces and Carl Richards held a live recording of their podcast Kitces & Carl, debating whether the oft-cited benefits of "scale" facilitated by technology is over-stressed, and how technology should best enable advisors to give better advice, not more advice to more clients.

The event finished off with a good discussion between academics and representatives of the non-profit institutions that were beneficiaries of money raised from the event. This year was again a fundraiser for the worthy world of financial planning.

Specifically, the beneficiaries—organizers call them benefactor partners—programs at the University of Wisconsin Green Bay, Texas Tech University, the American College Center for Economic Empowerment and Equality, and the Finserv Foundation (all of them 501(3)(c)s), which together will share in 50% of ticket sales from the event, which were $50 each (full transparency, as press my ticket was comped).

At the end of the day Holt revealed a check for $32,091 that would be split among the four organizations above.

AdviceTech.Live has received quite a few awards and accolades. It was a winner of the WealthManagement.com Industry Award for supporting Diversity, Equity and Inclusion through its Benefactor Partner investment in the CFP Board's D&I Inclusion initiative in 2021, and was a finalist in the Technology Thought Leadership category for the awards in 2022.

There were a couple of other delayed panel participants or technology glitches but overall the rest of the conference went well.

One of my few criticisms of this and some other realtime virtual events is the inability for attendees to communicate with those putting on the event beyond the “contact the host” email.

Some conferences have chat support. Perhaps that can be added, perhaps it adds unneeded complexity and expense that would lessen the contributions to the benefactor partners.

Also in the realm of feedback, beyond a ‘like’ button within the speaker bios, I saw no way for participants to share their opinions or rate the sessions (demos or panels), or ask questions of panelists in real time.

Is this unfair criticism? Maybe, the whole thing was for a good cause. However, those attending are making an investment of their time and ultimately, ratings, even if not shown publicly, can help drive better content.

All that said, this event is the shape of advisor tech conferences going into the future, and Asset-Map deserves kudos for putting it together. Sans hurricane interference, it is clear the platform they use works well overall and, as technology usually does, will only improve over time.

While in-person conferences appear to have made a comeback post-COVID, it remains hard to beat seeing so much technology from the comfort of your desk chair, and without paying for flights and hotels.