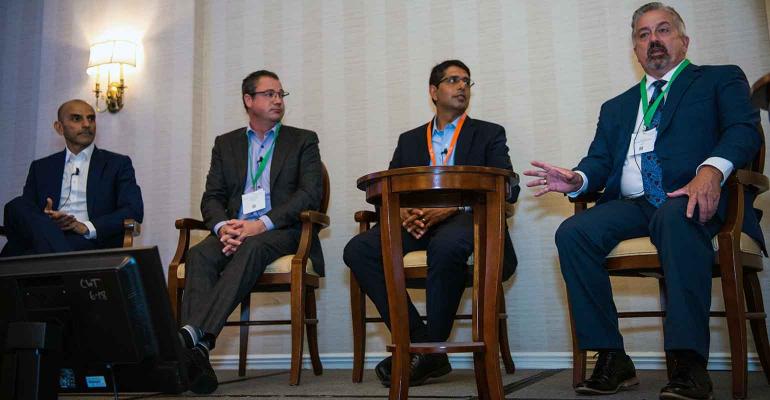 The Human Side of Tech Matters Most

Technology is great, but the buck ultimately still stops with humans—for better or worse. That was the message from a panel of four technology executives at the 2021 WealthManagement.com Industry Awards on Thursday at New York City’s New York Athletic Club.

The panel agreed that a near-term investment in training and the “digital experience” of their advisors is paramount. Ed Obuchowski, executive vice president and CTO of Advisor Group, said his firm attempts to strike a balance between giving its advisors the latest in technology, while not straying too far from tech that’s familiar to long-time advisors. At the end of the day, however, the technology is built for humans, not the other way around.

“We take an approach to deliver flexibility,” said Nick Graham, CTO for Cambridge Investment Research, in describing his firm’s approach to tech. Flexibility is critical because advisors can’t possibly keep up with the rate of technological innovation, added Vikram Chugh, chief operating officer of Robertson Stephens. Rather than trying to master every new innovation, it’s more important to be able to adapt to, and be comfortable with, changes.

Another critical aspect of maintaining the human aspect of advisor technology is recognizing that investors will want both human and tech solutions—and to clearly communicate with advisors where those boundaries lie. Human advisors shouldn’t feel like their firm’s tech is encroaching on their turf, said Kabir Sethi, managing director and head of digital wealth management at Merrill Lynch Wealth Management. “When you have a business with 15,000 advisors, you have to manage the conflict that can happen and the perceptions of competing solutions,” he said of robo advice and software-driven investment tools. Ultimately, it's up to investors to decide how they want to invest, but Merrill still has the responsibility of communicating with advisors as to where the boundaries of tech meet human advice, he said. “That’s what we’ve spent a lot of time on.”

That said, even as human advisors and their colleagues help create meaningful connections with investors, which drive the wealth management business forward, humans still make mistakes that heavily impact tech, particularly in the realm of cybersecurity.

Almost all cybersecurity breaches are a result of human error, said Chugh. While training can help mitigate that risk, it’s still something that should keep advisors up at night.

As banks have become better at defending themselves against cyberattacks, bad actors have turned to the independent space, said Obuchowski. He recommends dividing cybersecurity into home office protocols and advisor-level protocols. The latter are particularly complex, because each firm has its own systems, familiarity with technology and approach to cybersecurity.

For its part, Merrill Lynch has an “unlimited” budget for security, according to Sethi. That’s to reflect the severity of something going wrong. One vulnerability could prove to have “unimaginable” consequences, he said.

Executives on the panel agreed that technology would only continue to expand in its importance but won't truly replace the human element of advice. “If COVID taught us anything … it’s that the need to have a human relationship is absolutely critical,” said Obuchowski. In the end, technology is just a means to an end, he concluded.