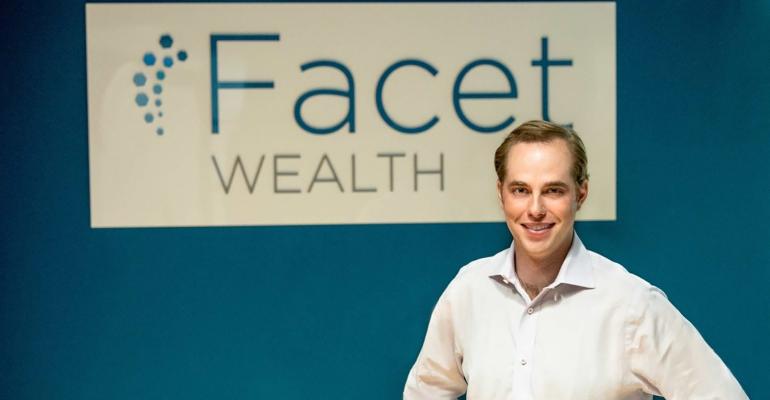 The funding will help Facet Wealth continue to grow its business, targeting the segment of the market that has never worked with a financial advisor.

The latest round follows the startup’s Series B funding round in 2020, when it raised $25 million, and brings its total funding to $165 million since inception in 2016.

Industry analysts say the latest funding round is validation of Facet Wealth’s model, which combines financial planning technology with human-based advice, delivered through its more than 100 staff CFPs. Unlike most traditional advisors, Facet charges a flat subscription-based fee; it’s not based on the client’s assets or income, but rather it’s tied to the level of complexity in the client’s situation, says Anders Jones, CEO and co-founder of Facet. The firm's average client pays $3,000 a year.

“We really see an opportunity to create a whole new version of financial planning that is much more consumer-centric and also targeted at a market that needs it, that doesn’t have access to great options right now,” Jones says. “We really exist for the 40 million households that have too much nuance and complexity in their financial lives for a DIY website like a robo or something like that, but they don’t have the asset level to be interesting to a traditional advisor.”

Clients work with a dedicated CFP and the firm looks at every aspect of their financial lives, from cash flow and debt to changing jobs and starting a family.

While Facet Wealth’s original plan was to buy the small, unprofitable clients from RIA firms, Jones says that’s no longer part of the client acquisition strategy. “It was an interesting acquisition channel that made a lot of sense on paper, and in practice was difficult to execute.”

Much of the firm’s growth has come from the segment of the market that has no financial advisor. In fact, Jones says 75% of their 10,000 clients have never worked with an advisor before.

“They were able to build something without any of the legacy issues that so many of the incumbents face,” says Gavin Spitzner, president of Wealth Consulting Partners. “It’s been very impressive to see how they’ve gone about building the business, building out their tech stack, building a very what I would call a best-practices, very prescribed advisory process, where they have very specialized roles. And they’ve put financial planning at the heart of the experience. It’s not incidental to the relationship, as it is with many incumbents.”

Jones says the funding will be used to continue its growth and expand Facet’s offering, such as adding tax and estate planning capabilities. It will also focus on not just creating financial plans, but also executing and implementing those plans.

“They’ve got momentum over a lot of other startups,” he says. “They’ve built a very much proprietary process, with the intention of building hybrid around it. Their planning process, the goal-based approach, the client experience have all been very, very strong.”

Gallant says their subscription-based pricing has been a differentiator for Facet.

“More often than not it’s cheaper than an AUM-based model, and it also incentivizes the advisor to look at every aspect of your financial life, not just the investment accounts they’re managing,” Jones says. “The industry interests are so entrenched that it’s going to take a while before the logjam breaks, but I think in the next 10 years, you might find that fewer than 50% of financial planning clients are paying via an AUM-based fee.”