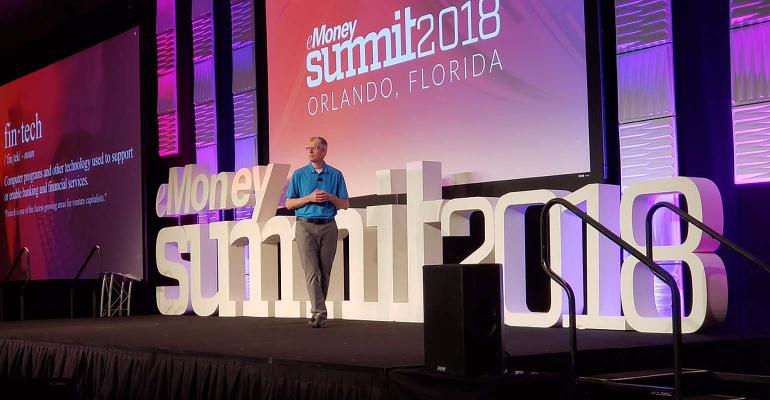 eMoney Advisor CEO Ed O’Brien has accepted a new position as head of technology at Fidelity Institutional, beginning in April. The news came out in a social media post Tuesday.

WealthManagement.com spoke to O'Brien Wednesday. He called his tenure “an amazing period of evolution and growth.” From the end of 2015 until the end of 2021, eMoney Advisor went from serving 1.1 million to 4.5 million households and its employee headcount grew from 316 to 840, according to spokesperson Joanna Armandi. The number of financial professionals using the financial planning software grew from 25,000 to 98,000 over the same time period.

The six years that he spent leading eMoney Advisor was actually longer than planned, said O'Brien. When he took the position, he expected to spend three to five years leading the organization, but cited the pandemic as a detour that required him to stay on for longer.

"This was not a surprise or shock to anyone," said O'Brien, about the move. "It's been part of the plan pretty much from the day I arrived here."

O'Brien turned over the leadership role to Susan McKenna, the firm's new interim CEO, on Tuesday. McKenna was eMoney’s head of marketing and business development. O’Brien, who led the financial planning software development firm after Fidelity bought it in 2015, will remain on eMoney’s board and will stay with the firm through the end of the month to help with the transition.

As head of technology at Fidelity Institutional, O’Brien will be returning to somewhat familiar territory. He ran advisor technology at Fidelity for more than a decade prior to taking over the CEO role at eMoney, where he guided the firm through an ongoing transition from screen scraping to API-based account aggregation, new predictive technologies and eMoney’s first mobile app, called Incentive. Fidelity Institutional serves advisors, wealth management professionals and institutions.

“Working alongside such a talented and committed team at eMoney has been a true highlight,” O'Brien said. “We have innovated, strengthened, and evolved our products, our business and our company. I could not be prouder of the incredible progress we’ve made.”

While O'Brien won't be starting his new position until April, his experience with "the accelerated changes in the market and how they impact advisors" will allow Fidelity Institutional to provide "greater dedicated focus on supporting our growing set of technology solutions," according to Michael Durbin, head of Fidelity Institutional.

In his new role, O'Brien will have a broader set of responsibilities, he said. He will also have familiar company.

Jess Liberi, eMoney Advisor’s former head of product, joined Fidelity Institutional in January, where she is head of platform technology. The move was coincidental and not pre-planned, according to Armandi.

McKenna joined eMoney Advisor in 2018 as head of marketing, bringing three decades of experience in SaaS marketing, according to a press release detailing the hire. In addition to her new leadership role, she is currently responsible for demand generation, revenue production and client retention.

"I am excited to keep the momentum going as I take on my new role as interim CEO," she said in a statement. "I look forward to working more closely with our clients and the larger eMoney team to achieve strong results and deliver on our vision of financial peace of mind for all.”