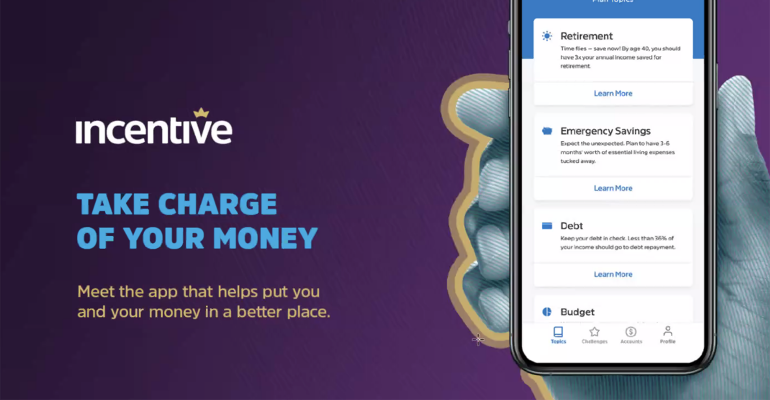 Project Avocado is toast. eMoney is coming out of stealth mode to reveal its new financial wellness app.

The secret is out: eMoney has pulled back the curtain on its soon to be available financial fitness and hot-lead-generating mobile app, officially called Incentive. Formerly known as Project Avocado, the financial planning app is designed to funnel financially literate retirement plan participants into financial advisors’ books of business. Ahead of Incentive’s 2021 release, WealthManagement.com was given an exclusive test run and first look at the app, which is currently in beta testing.

While currently in beta with a handful of plan sponsors, the app already has versions for both Android and iOS devices. Incentive teaches lessons about finance and is meant to promote responsible financial behavior in its intended retirement-plan-participant users, all while returning to advisors deep insight into the aggregated assets, engagement—and even the emotions—of those participants. The app is primarily meant for advisors who administer 401(k) plans, but it’s also slated to be available to advisors using eMoney and directly to individual investors.

After downloading the app, users whose employers have eligible retirement plans are sent a unique code that essentially unlocks the app and allows advisors and retirement plan sponsors to gather information on individuals using the app. After inputting basic information like their age and income, users are encouraged to hit savings goals and participate in savings challenges, while learning about responsible financial behavior tailored to their own financial situations.

Users are encouraged to aggregate outside accounts into Incentive, while receiving tutorials on “Plan Topics” like emergency savings, retirement plan participation, debt management, budgeting and insurance. 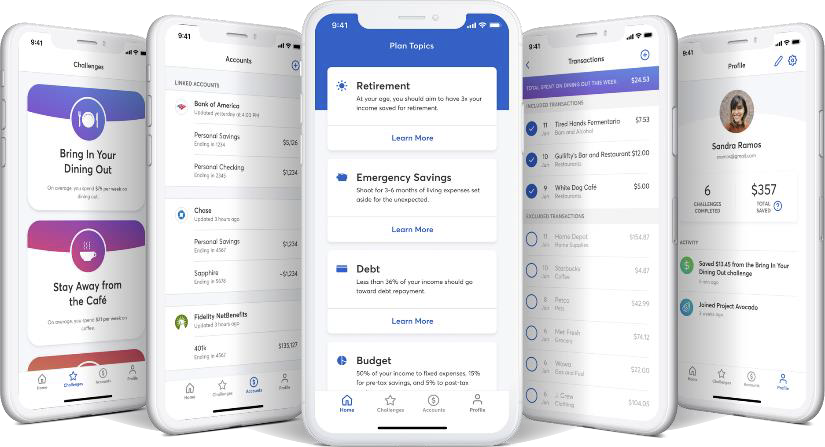 While users benefit from seeing their financial information in one place, receiving light financial coaching and learning about the basics of financial fitness, financial advisors gain powerful insights into plan participants—and can choose to become the name and face associated with that instance of Incentive.

“It's very important to us that we're positioning this through a financial advisor,” said Chad Porche, VP of UX and design at eMoney.

Incentive’s user audience is “underserved folks who are not working with advisors today,” he explained. “We think that giving this application …through a stable channel (like their employer) that’s backed by a credible source (meaning the financial professional that’s behind it), gives [users] a good, solid credible place to get started.”

“Ask a little, give a little,” added Chris Grant, the app’s product lead.

In exchange for the “financial peace of mind” provided to Incentive users, Porche said advisors will receive a lot of useful data in return. This can include salary data, aggregated assets of individual users, and which users are closer to retirement or those who have just started their careers. The app also informs the advisor of which financial planning processes users have completed, the predisposition certain users have to behavioral coaching or saving, and user sentiments around financial well-being. 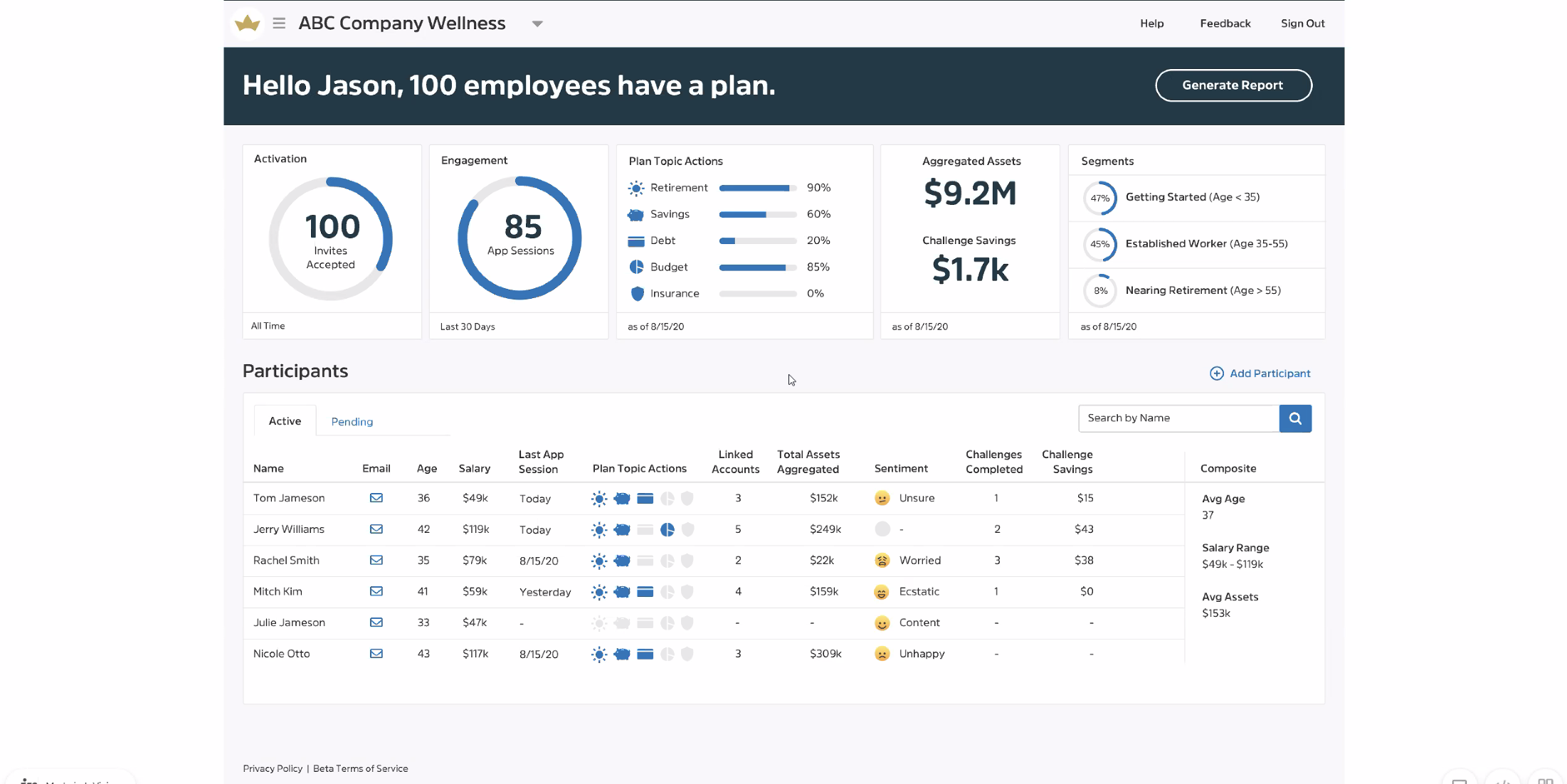 Advisors can use this information as an engagement or coaching opportunity, or even see which users have larger sums of held-away assets.

“When trying to reach all the participants at scale, it's super important to [advisors] to know what the breakdown of the employee base is, so that they can cater their communications to that audience,” said Porche. If a retirement plan’s workforce tended to be earlier in their careers, advisors would be better off teaching participants about the importance of investing early and getting an employer match, he suggested. Meanwhile, if plan participants tended to skew closer to retirement age, advisors could identify individuals who make good “traditional wealth management clients after they leave the workforce,” he said.

Advisors can also generate anonymized reports for plan sponsors, based on information on the advisor dashboard.

“This is a valuable product to eMoney, to the participant, to the sponsor, to the advisor,” said Porche. Pricing is still under review, but advisors will pay to activate the dashboard and make the service available to employees utilizing each individual retirement plan.

Account aggregation is clearly a draw for advisors. With recent lawsuits against data aggregators Plaid and Yodlee, eMoney spokesperson Joanna Armandi said that “the Incentive application does not store or share credentials for any connections. Our API-based connections are token-based.” While Incentive can access individual users’ transactional data, to execute a savings challenge, for example, financial advisors are not able to see that same data, unless a user affirmatively decides to share. Incentive can also use local biometric authentication, widely known as “Enabled Face ID.”

For advisors concerned about the liability they may face in using Incentive, Armandi pointed to the app’s privacy policy and terms of use, which note that certain provisions require arbitration “rather than jury trials or class actions” between a user and the provider, “including [eMoney] Advisor.”

With the app’s beta run well underway, changes are already in the works to make “Plan Topics” more adjustable, said Porche. That way, advisors who prefer something other than a 50/15/5 budget, for example, can provide more tailored guidance.

As for dropping the name Project Avocado? "This was our internal riff on millennials spending too much money on their avocado toast," said Porche. "That name proved to be pretty polarizing. Some people found it charming and really liked it; others didn't think it was serious enough."

"We were looking for something with a little more longevity," he continued. The name "Incentive is really grounded in the idea of how personal money is. It's personal and rooted in the fact that everybody has a motivation for becoming financially healthy."

The app can be downloaded now, but without the code from a plan sponsor, its functionality is restricted. “We will be feature complete for our first version here before the end of the year,” added Porche. Currently “around 10 firms” are using Incentive internally and with real plan sponsors.