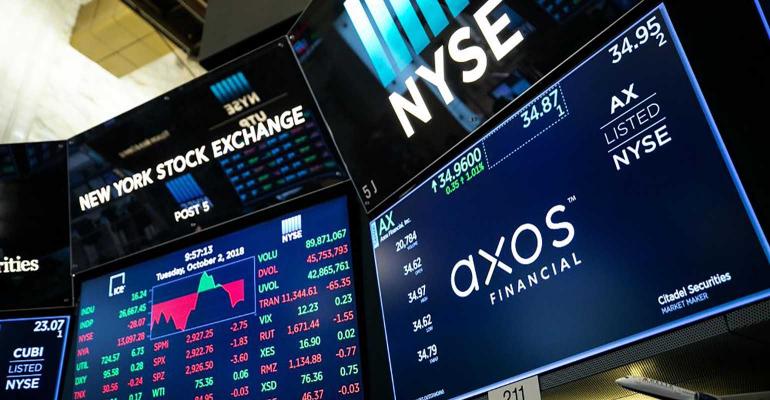 Now that it owns a custody platform, Axos Financial is positioning itself as an advocate for small advisors.

Axos Financial is on a mission to rejuvenate and repurpose technology originally developed by Trust Company of America (TCA) over a decade ago—all the while quietly laying the groundwork to bring in the business of advisors with between $50 million and $500 million in assets.

The changes come as TCA “languished” in “maintenance mode” amid a series of sales from 2018 to 2021, according to one of the architects behind the firm’s advisor platform. Under its latest owner, Axos, TCA’s Liberty platform is getting overdue attention as its new owners aim to appeal to RIAs, particularly any disaffected by the ongoing integration of TD Ameritrade, following Charles Schwab’s purchase of the financial services firm.

The division is well-suited for advisors with between $50 million and $500 million in assets, said Mike Watson, head of RIA custody at Axos. The more than 200 RIA firms using its custody platform have about $25 billion in assets, he said. And some $15 billion of those assets are with firms that have more than $1 billion in AUM. The division also provides self-clearing for Axos and clearing services for about 75 independent broker/dealers.

In March 2021, Axos had embarked on building its own RIA custody platform—it had wanted to buy the E*Trade advisor technology capabilities but was outbid by Morgan Stanley when the bank announced its purchase of E*Trade in 2020, said Watson.

Under Axos, the division is “returning to that focus on the small independent RIA and helping them grow their business,” said Dave Curry, a software development manager at Axos Advisor Services and one of the original architects of the platform. “They are putting Liberty front and center in doing that. They are interested in investing in Liberty to take it forward.”

The technology that Axos Advisor Services offers to financial advisors dates back to 2011, when TCA retooled two tech platforms into the single Liberty platform, said Curry. Liberty has been iterated and improved upon since its introduction, with the latest improvements being tax-loss harvesting and self-service billing, he said.

Liberty provides rebalancing, portfolio management and self-service billing for advisors, while components like financial planning still require contracts with third parties. Axos Financial is working to integrate its digital banking with its wealth management technology, according to executives, to give advisors easier access to lending solutions for both end clients and RIAs who may be considering financing for acquisitions or succession planning of their own.

Advisors currently using the platform should expect to see new features deployed more frequently than they had prior to the Axos “conversion event” that took place in August 2021, Curry said. “We’ve been refocusing.”

Routine maintenance was never neglected after E*Trade completed its $275 million acquisition of Trust Company of America in 2018 or Morgan Stanley’s subsequent 2020 purchase of E*Trade Advisor Services, which housed TCA’s technology. But enhancements to the platform became less groundbreaking, said Curry.

“That effort had kind of languished, to be honest, under E*Trade and Morgan Stanley,” he said. “The rate at which we were bringing on new RIAs fell off very significantly during that three-year period.” Curry was rehired by Axos in 2021 after he left his role working on TCA’s technology in October 2018.

Axos Advisor Services and its predecessors have had roughly 200 RIA firms that have remained on the platform through the acquisitions since at least 2018.

Under Axos, the custody division wants to be the “one-stop shop” for advisors trying to establish their practices, those on a smaller budget or those who work with more than one custodian to diversify the service providers they use, according to executives at the firm. “It’s about cooperation instead of competition,” said Watson.

To be sure, Axos isn’t the only custodian betting that advisors may find the grass to be greener with a new service provider. It would like to be considered for advisors departing from giants like Schwab or those looking for a new custodian.

But Axos is competing with several existing small custodians and custodian service providers. These include Interactive Brokers, which supports clients and advisors in and outside of the U.S. and had $41 billion in AUM across 5,570 advisors in its "Pro Advisors" segment. In addition to IB are Shareholders Service Group (SSG), which supports some 1,600 RIA firms, as well as TradePMR and its 400 RIA firms and Altruist (which has 1,000 advisors using its platform). None of the latter firms disclose the assets that pass through or reside on their platforms.

And among the big three custodians BNY Mellon’s Pershing unit wants to attract “never Schwabers” too, and has retooled its minimums to appeal to new advisors.