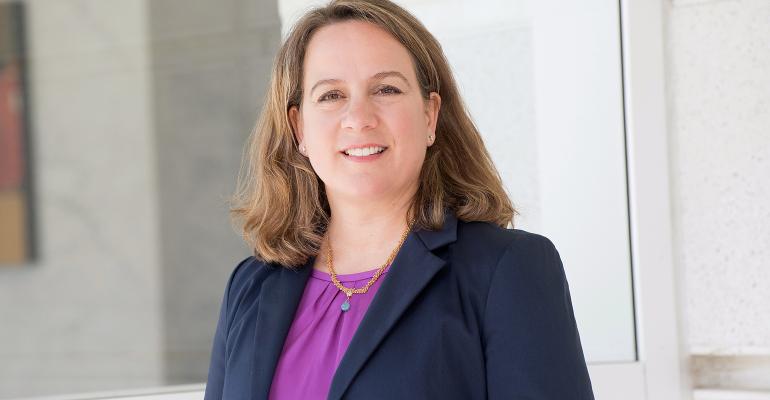 AssetMark Seeks To Compete On Broader Stage With Latest Moves

The turnkey asset management platform is looking more like a diversified wealthtech provider, having added services for planners and RIAs.

The turnkey asset management platform AssetMark is looking more like a full-fledged wealthtech firm than a simple TAMP.

With $74.5 billion and more than 8,400 advisors on its platform, the firm is making a push to appeal to advisors looking for “new and different solutions,” according to the firm’s new CEO, Natalie Wolfsen.

Besides making a change in leadership, in less than two months AssetMark announced the pending launch of AssetMark Institutional, which is designed to provide RIA-focused products, Advisor Managed Portfolios and alternative investments; a client experience that better supports financial planning, account reporting and digital communication; and specific events and "thought leadership" materials for RIAs. It is scheduled to go live on March 10. On March 1, AssetMark announced it was acquiring an Austin, Texas-based financial planning software developer, called Voyant, for $145 million.

In describing both of the moves, Wolfsen said she expected the new features and tech to be additive to the firm's business, rather than a shift in direction that might leave independent broker-dealers and insurance-affiliated professionals feeling left out of AssetMark's development timeline.

For the roughly 20% of its client base that are RIAs, AssetMark Institutional will provide new products and services, "built specifically for RIAs [and] providing the right set of products, operational support, technology and the community resources to support [RIAs'] growth, efficiency and scale," according to Charles Goldman, the former CEO, who described the platform on the firm's quarterly earnings call in February. Goldman is staying on with the company for a year as a consultant to assist in the transition to a new CEO.

In rolling out Institutional, Wolfsen sought to downplay a distinction between independent broker-dealer reps, insurance-affiliated groups and RIAs. She walked back an initial description of independent broker-dealers and insurance-affiliated professionals as “our traditional channel”—when compared to RIAs—noting that all three have been customers of AssetMark for more than a decade.

All three channels are beginning to converge, at least in terms of the services they need, said William Trout, director of Javelin Strategy & Research's wealth management division. Adding the Institutional capabilities is more significant than a mere appeal to RIAs.

"RIAs tend to be small fry," he said. "It's a growing market, but the IBD market is growing as well, and even the insurance BD market, in some places. This is a move to scale up, rather than just sort of fill in some gaps."

While Wolfsen said AssetMark doesn’t aim to expand the proportion of RIAs on its platform, it does expect to grow the number of RIAs using its services to increase.

Besides new RIA services, products and support under the Institutional umbrella, another area of expansion is offering in-house financial planning. AssetMark’s platform is open architecture, but now eMoney, RightCapital, Envestnet | MoneyGuide and others will have to compete with AssetMark’s own financial planning provided by Voyant. In fact, both AssetMark and Voyant currently provide account aggregation through Envestnet | Yodlee, while Voyant also integrates with Plaid.

Wolfsen expects the integration of Voyant’s capabilities into its platform to provide “foundational planning” that will be sufficient for some advisors and investors. For others, third-party planning software providers will continue to be an option.

Now that it has its own financial planning software capabilities, AssetMark is looking forward to pushing the competition, said Wolfsen. She said Voyant’s software bridges cash-flow and goals-based planning styles, creating a powerful tool for advisors. To be sure, Envestnet has its own combination of goals- and cash flow-based planning in the MoneyGuide and FinanceLogix software it offers.

Nevertheless, U.S.-based advisors can be forgiven if they haven’t heard of Voyant before, even though it was established in 2006.

“When they started, they got their immediate traction outside the U.S.,” Wolfsen said. “They've only just started, in the last year, in earnest in the U.S.”

The lack of brand recognition for Voyant in the U.S. will be a challenge, added Trout.

"They have been historically somewhat invisible in the U.S.," he said. With so few stand-alone financial planning developers available for purchase, AssetMark was bidding against "deep-pocketed investors" to land the firm. The decision to launch Institutional, shuffle CEOs and buy a financial planning firm over the course of a few weeks was "clearly orchestrated," he said.

"This is partly to keep up with the Joneses," said Trout, "but that's the way the industry is going."

"There's a determination here to get to the big leagues and potentially even outmuscle Envestnet," he said. "I would expect more action from them in terms of adding new capabilities or acquisitions."

For Envestnet or AssetMark, he said, the 'big leagues" would constitute a deal where either firm is the operating system for a major broker-dealer.

Voyant’s major U.S.-based client is Lincoln Financial Group and the firm is in beta testing to expand its services to Australia, according to AssetMark CFO Gary Zyla. Voyant has “deep and longstanding relationships with large financial institutions such as Toronto-Dominion, Lloyd's Bank, BMO and CIBC,” Zyla told analysts on Monday. The financial planning provider is multi- currencied and multilingual, according to Voyant's CEO Kaufman.

With the launch of Institutional and the acquisition of a financial planning provider, AssetMark is setting its sights on competing with much larger firms, like Charles Schwab. Indeed, Wolfsen sees AssetMark as a home for advisors disaffected with Schwab’s acquisition of TD Ameritrade. AssetMark has its own custodian and it integrates with outside custodians.

“We can provide a level of personalized service and support ... to advisors at smaller asset levels than some of these large providers can,” Wolfsen said. “We're very, very excited about that part of our offering.”

Analysts and executives alike point to scale as a crucial element for AssetMark's future success. It remains to be seen just how massive that scale needs to be.