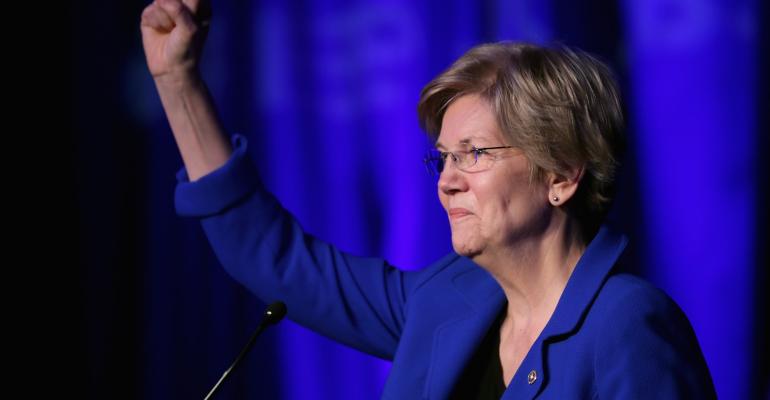 What Warren Forgets About ‘Shameless’ Profiting in Housing: Conor Sen

With all that was going on, investors buying up properties to rent represented a lifeline to banks, the housing market, and local economies.

(Bloomberg Opinion)—Democratic presidential candidate Elizabeth Warren attacked Wall Street firms on Monday for buying houses in the wake of the financial crisis, arguing that it contributed to the country's growing inequality. I'm sympathetic to Warren's criticism, and yet two things are true when it comes to the investor response to the housing bust: It did represent a transfer of wealth from stressed homeowners to the wealthy, contributing to inequality, but it also stabilized the housing market and local economies at a time when there were no other buyers.

It's easy to show how investors buying foreclosed homes contributed to rising inequality. In many cases, the people who lost their homes were middle-income families who bought in the early or mid-2000s when home prices were rising -- and in many cases using nontraditional financing that allowed them to get mortgages with little or no money down. As the financial crisis and Great Recession unfolded, the blow to home prices and employment was particularly hard on communities that had flourished amid the housing boom and growth in alternative mortgage financing. Former booming metro areas like Phoenix and Las Vegas were hit hard, but so too were communities of color, with homes in minority communities more likely to be foreclosed upon than homes in white communities.

As foreclosed homeowners handed their keys back to the bank, lenders found themselves in the unexpected and unwanted position of being huge owners of residential real estate. This was a particular challenge when more than 1,000 banks were in trouble, burdened by losses from writing down subprime mortgages. Unlike some types of assets, residential real estate that isn't being regularly maintained loses value quickly: Lawns become overgrown, water in backyard pools turns from blue to green, looters rip out appliances and copper wire, vermin and squatters can move in. Remaining homeowners in the neighborhood see values fall as well, sometimes leaving them owing more on their mortgage than the property is worth. Not only does that give them an incentive to abandon their homes, but it ensures that would-be buyers steer clear.

There also were knock-on effects in local economies and government. Falling home prices and excess inventory brought a halt to new home building and renovations, hurting construction employment and retail sales. The drop in home values led to declines in municipal tax revenue, leading cities and counties to lay off public employees, freeze teacher pay and raise taxes to keep the lights on.

With all this going on, investors buying up properties to rent represented a lifeline to banks, the housing market, local economies, municipal government and to families that lacked the wherewithal to scrape together down payments for a purchase. Soaking up the excess inventory helped stabilize bank balance sheets -- preventing the need for further taxpayer-funded government bailouts -- shored up home prices and bolstered municipal finances. Before renting out homes, investors would often spend tens of thousands of dollars fixing them up and putting in new appliances, boosting construction employment and retail sales. Turning vacant homes into rental properties expanded local housing supplies at a time when it probably otherwise would have been falling.

That said, the net impact of the boom-bust cycle was that many middle-income consumers bought houses near the peak while wealthy investors and institutions bought those same homes from banks in foreclosure near the bottom. The wealth transfer from the middle class to the rich is undeniable. And there's no doubt that the federal government should have done more to help homeowners whose lives and finances were upended by the meltdown in the housing market.

Today, with a market characterized by a shortage of affordable homes, it's easy to forget how out of favor homeownership was in the early part of the decade because of student-loan debt, high unemployment, lack of down-payment savings, jitters from the housing bust and an unwillingness to commit to a large purchase that represents a big bet on the future. To this day, the rate of homeownership is still well below the high reached more than 15 years ago:

A Recovery in Name Only

This doesn't mean that the dire economic conditions that shaped the market almost a decade ago should justify policy decisions or inaction today. Bank balance sheets and tax revenues have recovered, and a shortage rather than an excess of inventory is the biggest issue in the housing market. Homeownership, particularly for entry-level buyers, is intertwined with politics and community in a way not comparable to other forms of economic activity. Today it's understandable why seeing aspiring homebuyers squeezed out of the market by all-cash institutional investors is problematic.

But back in the dark days of the early 2010's housing market, investors and cash buyers were just about the only game in town. Without them, America's housing crash would have been much worse.

To contact the author of this story: Conor Sen at [email protected].