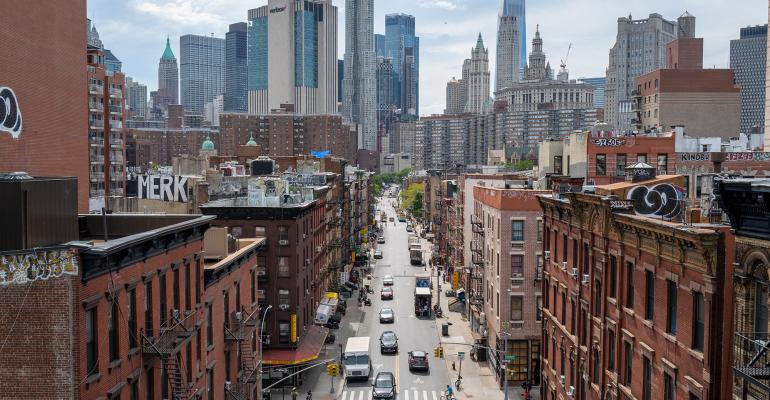 What If the Rental Market Is the First to Break?

One of the many remarkable things to happen in that first pandemic year is that we got a boom in both home-buying and renting.

(Bloomberg Opinion) -- There's been an assumption that before inflation can be tamed and housing prices ease, unemployment must rise significantly. But what if it's the other way around?

The Federal Reserve has projected the unemployment rate will rise to 4.4% in 2023, and others have even higher forecasts. The thinking is that a strong labor market has been pushing up inflation and worker incomes, which in turn has led to rising housing costs in a world that hasn't provided enough places to live. Elevated rent growth means overall inflation will remain too hot.

Adding 300,000 jobs a month with wages rising 5% or more a year is clearly inconsistent with the Fed's 2% inflation target. But there's another way to contain rent inflation: fewer people renting.  Soaring rents could motivate more people to find a roommate, or move back in with family, or speed cohabitation with a significant other.

Ordinarily, this would be a foolish prediction — people have chosen their current living arrangements for a reason — but the pandemic brought about a historic surge in household formation and it's possible some of that will unwind as parts of our overheated economy cool. In fact, there's emerging data that it started happening within the past couple months.

RealPage Market Analytics posted last week that apartment demand in the third quarter was much weaker than we've seen over the past couple years "due to what appears to be an abrupt halt in household formation." The monthly Apartment List report for rents in September showed a decline of 0.2%. Historically, rents decline a bit in September, so seasonally this isn't a huge surprise, but it's the first time that we've seen monthly rents track what we saw in 2017-19 before the onset of the pandemic.

One of the many remarkable things to happen in that first pandemic year is that we got a boom in both home-buying and renting. It was an explosion in household formation — four million households were added between the second quarter of 2019 and the second quarter of 2020, compared to a pace of more like one million a year heading into the pandemic. Some people decided to leave the city to buy a home in search of more space. Others living with family or roommates took advantage of the temporary decline in cheap rents to get their own place, or to acquire additional space to use as a home office as remote work surged in importance.

While some of that excess household formation has reversed, we still had two million more households at the end of the second quarter of this year than we would've had based on the pre-pandemic trend. When rents surged in 2021, in much of the country it was mostly clawing back some of the declines that occurred in 2020. But as rents continued growing this year, we may have hit a tipping point on affordability. Consider New York City, where according to Apartment List, the big increase in rents versus pre-pandemic levels only began in the past few months.

For tenants with leases coming due right now, the combination of inflation eating into their budget, rent resetting at a stratospheric level and recession fears might be too much, spurring them to find a roommate or get a smaller, cheaper place.

This would be an interesting wrinkle for the back-to-the-office conversation, as well. For a lot of employees, working remotely requires a home office, and home offices cost money. If rents have gone to unaffordable levels then some of those home offices become unaffordable luxuries. So as people trade down into cheaper apartments, a more cramped space might motivate them to spend their work day back in the office.

But mainly, unwinding some of the remaining excess in household formation that occurred in 2020 would have important implications for inflation. There's been an unexamined assumption that a tight rental market and a strong labor market would keep pushing rents higher, creating a persistent inflation challenge for the Federal Reserve. But if we've hit a price level in the apartment market that leads to demand destruction, we could see an unexpected increase in vacancy rates and a more rapid cooling in inflationary pressures there than expected.

To contact the author of this story:
Conor Sen at [email protected]