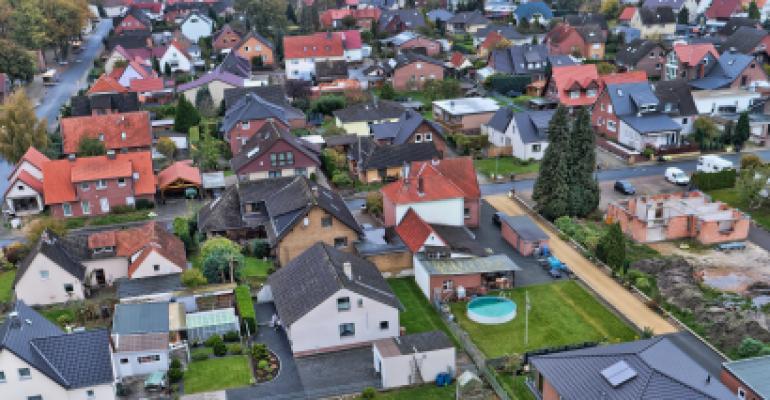 I could find no evidence in other countries that this particular form is routinely considered to be so incompatible with all other types of urbanization.

(Bloomberg Opinion) -- Dahlem is one of the most affluent neighborhoods in Berlin, its lovely, leafy streets lined with large mansions — villas, the Germans call them — built mostly in the early 1900s. As I walked from the thatch-roofed Dahlem-Dorf U-Bahn station to dinner at the home of a not-exactly-Daddy-Warbucks friend one recent evening, I initially puzzled at how he managed to afford such posh surroundings. Then I saw a villa with six doorbell buttons at the front gate instead of just one. I noticed one or two more such subdivided villas after that, plus a couple of small plaques indicating that there were doctor’s offices inside. My friend’s place turned out to be in a small apartment building that was newer than the surrounding houses, but built to about the same scale.

Such mixed housing is not entirely unheard of in the U.S., but it is found mainly in neighborhoods that predate zoning, which began its stateside rise in the 1910s and 1920s. In the zoning era, especially since World War II, the general rule for residential neighborhoods has been single-family houses and only single-family houses, with no apartments or businesses allowed.

In Germany, which is usually credited with inventing zoning, this practice of dividing cities into areas intended for certain activities and building forms dates all the way back to the 1870s. Development in Dahlem, a former country estate that had ended up in government hands, was even managed by a Royal Commission for the Division of the Domain of Dahlem that dictated that buyers of plots had to erect villa-like buildings on them within two years or pay a fine.

German zoning and planning innovations got lots of attention elsewhere, and the American reformers who began to advocate more restrictive urban development rules in the early 1900s were quite open about their Teutonic inspiration, at least until World War I. But while German laws and regulations do a lot to shape how and where people can build, they don’t dictate that single-family housing be segregated from all else. In fact, pretty much no other country does this to the extent that the U.S. does. As University of Georgia professor of landscape architecture and planning Sonia Hirt wrote in her charming and enlightening 2014 book “Zoned in the U.S.A.”:

I could find no evidence in other countries that this particular form — the detached single-family home — is routinely, as in the United States, considered to be so incompatible with all other types of urbanization as to warrant a legally defined district all its own, a district where all other major land uses and building types are outlawed.

Single-family zoning is now on the defensive in the U.S., with the Minneapolis City Council voting in 2018 to allow up to three housing units on every residential parcel, and the Oregon legislature doing something along the same lines (the rules vary by size of city) last year. Although similar legislation has so far failed in California, other reforms to allow homeowners to add units to existing houses have in the words of one expert put the state “on the precipice of single-family zoning functionally not existing,” and the bolder reforms aren’t dead yet.

These efforts have engendered some alarmed — and alarmist — reactions. “Dems Declare War On Suburbs, Seek To Ban Single-Family Housing,” conservative journalist Luke Rosiak wrote on Twitter in promotion of his Daily Caller article about a bill just introduced in the Virginia legislature that he claimed “could quickly transform the suburban lifestyle enjoyed by millions.” Suburbanist thinkers Joel Kotkin and Wendell Cox argued in City Journal that without widespread homeownership, “America will become increasingly feudal in its economic and social form.”

Kotkin and Cox hinted but were careful enough not to claim outright that abolishing single-family zoning would have this effect. Their caution was warranted. Germany is in fact a country where both homeownership and single-family houses are minority phenomena, and I’ll leave you to decide whether that means it’s feudal. Lots of other affluent nations have homeownership rates similar to or higher than that of the U.S. (the highest tend to be in the formerly communist states of Eastern Europe) without U.S.-style single-family-only zoning.

Hirt, who was born and grew up in Bulgaria, acknowledged the power of this reasoning in “Zoning in the U.S.A.,” but she argued that it is incomplete. “If real-estate economics was and continues to be the key factor, if residential property values inevitably decline in surroundings where multiple land uses and housing types are allowed,” she wrote, “shouldn’t people in the other capitalist democracies be equally fearful about their home’s environs and their home’s values?” She proposed instead that a particular set of cultural beliefs determined the form that zoning took in the 1920s, and that this form has subsequently shaped Americans’ notions “of the places in the city where we can and should meet each other, the streets we can and should travel on, how many cars we can and should have, and the kinds of homes we can and should live in.”

Some of these pro-single-family-housing cultural beliefs date at least to the founding of the U.S., and the preferences of certain founders for the country over the city. Others were unique to the 1920s and really pretty nutty. Corner grocery stores were depicted as vectors of disease and disorder, while the landmark 1926 Supreme Court decision that established the legality of zoning asserted that “very often the apartment house is a mere parasite.” This was an era when lots of reformist types also supported eugenics, and the role of similar bigotry in the rise of zoning can’t be denied. But it was also driven by comparatively innocent beliefs that just happen to have been totally wrong. Zoning advocates argued, for example, that channeling residential development into neighborhoods of detached single-family houses far removed from shops and offices would be a boon to Americans’ health, while in fact the extreme dependence on automobiles that often resulted has been the opposite.

Would getting rid of single-family-only zoning suddenly reverse all of this and transform suburbia? Uh, no. Ibraheem Samirah, the suburban Virginia dentist and newly elected state lawmaker who sponsored the zoning reform bill discussed above, said he thinks any change “would be much more long-term, much slower.” His hope, he told me last week, is to shift the balance in local housing politics a little by giving homeowners the opportunity to profit from developing their own properties instead of just fighting nearby development. “I’m trying to broaden the coalition for more affordable housing beyond developers to property owners,” he said.

In Berlin, meanwhile, it’s not as if the absence of single-family zoning has solved all the city’s real estate problems. Purchase prices and especially rents are still low by the standards of the world’s major cities, but they’ve risen so much over the past two decades that the local government felt compelled to impose a five-year rent freeze last fall. Single-family zoning is not the sole cause of high housing prices in California, Virginia or elsewhere in the U.S. But it is kind of strange.

To contact the editor responsible for this story:
Stacey Shick at [email protected]