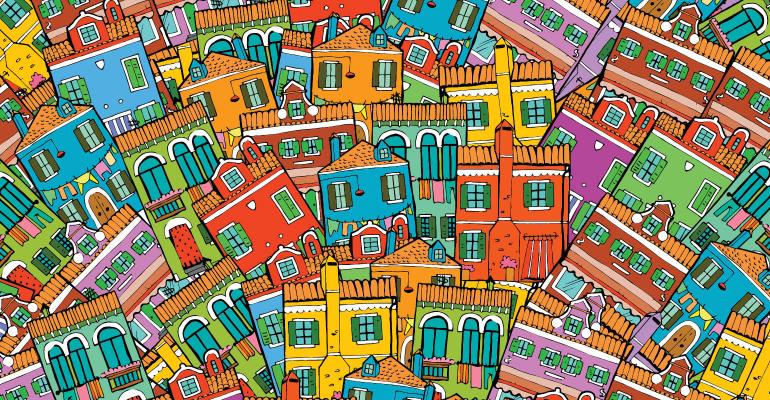 Capital pouring into the growing single-family rental (SFR) housing market is bumping up against a tough competitor—the consumer. Heightened competition amid a tight supply of housing inventory in many markets is pushing investors to shift strategies to focus on new development.

“What you’re seeing now is the maturation and scale in the sector, where it is really being viewed as a distinct asset class within the real estate sphere, similar to multifamily or data centers,” says Gary Beasley, CEO and co-founder of Roofstock, a marketplace for single-family investment properties. Along with the maturing of the SFR sector, the market has seen more capital, including institutional money, that is targeting single-family rentals and looking for a way to enter the space.

For example, Tricon American Homes announced a new $750 million joint venture deal last summer with the Teacher Retirement System of Texas and Singapore’s GIC to acquire and manage a portfolio of rental homes together. Each has agreed to contribute $250 million to a fund that aims to acquire between 10,000 and 12,000 new SFR properties. “I think you will see other groups like that partnering with existing players to put money to work and build portfolios,” says Beasley.

The challenge for investors is how to place capital in a market where competition for existing homes, and management inefficiencies of scattered property locations, is squeezing returns. The solution for many these days has been to shift their focus to development. Build-to-rent strategies tend to work well in markets where building and land costs are lower and where there is more entry-level home building, such as Atlanta, Charlotte, N.C., Phoenix and parts of Texas. “It doesn’t work well everywhere, but there are definitely some markets where the numbers pencil,” says Beasley.

New York-based GTIS Partners started out buying older homes out of foreclosure during the housing crisis, renovating them and then renting them out. At its peak, the firm had aggregated over 4,200 SFR homes. Last summer, the investment group opportunistically sold nearly half of that portfolio to a private equity buyer in a $243 million deal. GTIS is one firm that has shifted its strategy entirely to investing in build-to-rent homes.

Over the past 24 months, the firm has been acquiring newly built rental homes from homebuilders in various subdivisions across its SFR target markets in the “smile” states in the southern U.S. “As prices in the housing sector went up, the pricing gap between new homes and older homes became smaller,” says Rob Vahradian, senior managing director and head of U.S. investments at GTIS Partners. Newer homes also have the advantage of more predictable and lower maintenance costs; the ability to tailor the design to renters and higher rentability.

Initially, investors found an entry point into new developments by buying up 20 to 30 homes scattered within a new subdivision. Oftentimes, developers were willing to sell at a discount—of 6 to 7 percent—because selling directly to investors eliminated their marketing costs. Homebuilders could also use those sales to kickstart a project and secure financing, or quickly close out a project that was fully developed. “So, it is profitable for the builder, as well as for us,” says Vahradian.

The next leg of evolution in the SFR market is building an entire community of rentals with 150 to 250 homes concentrated in one location with shared amenities and on-site management similar to that of apartments. For example, AHV Communities is developing two SFR communities in Austin, Texas that combined will include a total of 175 upscale homes ranging in size from 1,440 to 1,882 sq. ft. and offering three or four bedrooms.

That strategy is appealing for a variety of reasons, notes Vahradian. Aside from the benefits of buying newer properties, it also significantly reduces overhead on transaction costs, especially compared to buying one-off homes on the MLS. It also creates management efficiencies by having a large group of homes in a concentrated location. “Now you can really run it like a multifamily management model,” he says. Over the next 12 to 18 months, the firm plans to target and invest about $200 million in equity in purpose-built single-family rental communities, which will likely equate to about 2,500 homes.

REITs are also increasing their focus on new development. For example, about one-third of the $150 million in homes that American Homes 4 Rent acquired in the third quarter were newly constructed. The REIT also entered into a new $150 million development joint venture with an institutional investor last fall. Although the REIT’s stake in that JV is relatively small at $30 million, CEO David Singelyn said in the firm’s third quarter earnings call that the venture will allow the REIT to “scale the business more quickly in the early years” and to leverage its capital more efficiently through the generation of fees and the potential for promote.

The JV is focusing on development opportunities in select markets in the southeast, while the REIT has also indicated that it is expanding its geographic scope of wholly-owned development activity by opening new Western markets within its existing footprint.

One of the headwinds to SFR investment has been figuring out cost-effective management. The SFR sector has some good demand drivers, but recent REIT performance points to some of the operational challenges. According to Nareit, the three public REITs in the single-family home sector were reporting a one-year compound return of -6.9 percent based on data through the first week of January.

“I think there is a good fundamental story there with low supply, although rates may not be going up as much over the next couple quarters as thought previously,” says Haendel St. Juste, senior REIT analyst and a managing director at Mizuho Securities. However, affordability of homeownership has been pushed further out after several years of pretty strong price appreciation and rising interest rates. Those rising costs will certainly help demand for single-family rentals, he adds.

The real issue has been investors’ confidence in their ability to operate the assets, St. Juste notes. “We’ve seen several quarters of operational missteps from the REITs over the last year on the operational expense side.” REIT investors are concerned and frustrated with those operating foot faults, which will likely keep stock prices down until there is some better operating performance, he adds. “So, despite how much I think the sector has a good footing, they’ve just become a ‘show me’ story.”

Yet the management piece has become much more dialed in as compared to several years ago when investors were just starting to build portfolios. There are more advanced processes and systems in place, such as yield management tools, and people have learned how important it is to do preventative maintenance and renovations up front, notes Beasley. In the early days, there was more operational risk, which required buying at a deep discount to create some added cushion on cash flow. Now investors are entering in at higher acquisition values, but they also feel increasingly confident in their ability to operate rental homes profitably, he adds.

“On a macro level, we think this is a very sound business, because people are renting more,” says Vahradian. GTIS sees a strong and growing market with SFRs that comprise about 16 percent of the overall single-family housing market. In addition, renters tend to be families that want larger three- or four-bedroom homes that appeal to aging millennials who are starting families, but don’t want to buy a home. “So, it doesn’t cannibalize multifamily and it is a little more recession-proof, because the supply of houses is low now and in a recession housing production tends to go down,” he adds.