Rising Inventory Will Be the Housing Market’s Next Problem

All told, the early 2023 inventory spike looks unavoidable, and the real question is where mortgage rates will be when the listings hit the market.

(Bloomberg Opinion) -- The US housing market is in an uneasy state of equilibrium. Demand has plummeted as mortgage rates hit a two-decade high, but prices haven’t declined much in part because supply remains correspondingly low. If borrowing costs don’t start to normalize by early next year though, the scales may finally tip and prices could plunge.

The start of the year, of course, is when homeowners and real estate agents start to bring new inventory to market. It’s a time-honored tradition that draws on some smart strategy and a bit of industry lore. As the thinking goes, buyers and sellers often want to get their transactions closed by summer, especially if they have children starting at new schools in September. Agents also contend that homes look their best in spring, surrounded by lush landscaping and emerald green lawns. Even if sellers don’t come out in quite their usual numbers this year, there may still be enough additional inventory to push home prices over the cliff.

Clearly, the amount of supply on the market is still extraordinarily low relative to demand. It would take just 3.3 months to work through the market’s existing home inventory, based on non-seasonally adjusted data for the most recent month. The metric had already been declining consistently for a decade through 2019, but the pandemic brought it to unthinkable lows. It’s no wonder that the S&P CoreLogic Case-Shiller 20-City Composite Home Price Index is down only about 2% from its peak despite mortgage rates surging to 7% from 3% in 10 months. 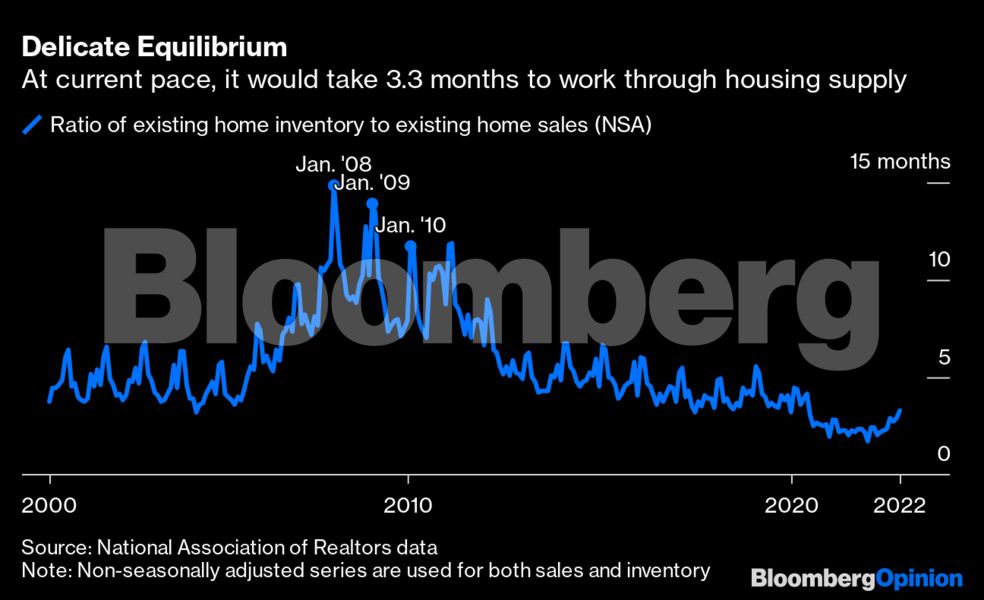 But every year, the inventory-to-sales ratio spikes in January and February as transactions crater and the first new listings start to come online in anticipation of the spring open house season, which can set bad things in motion in times of stress. In January 2008, supply jumped by four months worth of housing to 15 months, and there was a similar spike during every January of the housing bust. The last two years have experienced unusually muted spikes in the ratio, but that won’t repeat again this winter. If you zoom in, it’s already clear that the number of months of supply has been climbing in a seasonally unusual manner. The trend line will start to look concerning if it breaks through seasonal norms from 2018 and 2019 in the months ahead. 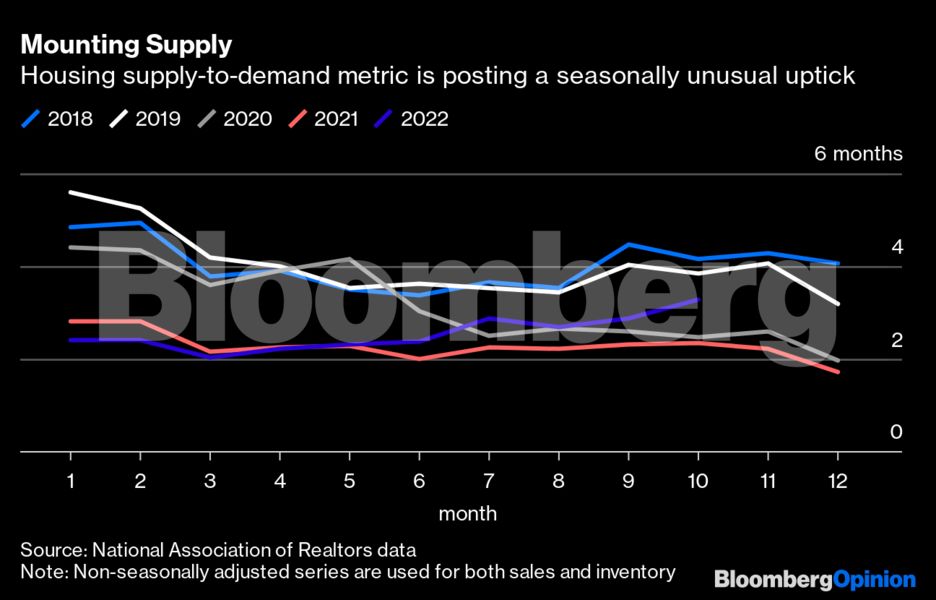 Consider the various countervailing forces in the market heading into the 2023 inventory surge. On the one hand, some would-be sellers will decide to forgo transactions this year and hunker down in their existing homes, many financed with below-3% mortgages that they’d forfeit if they bought a new property. On the other hand, more than 30 million single-family homes and condominiums in the US — 34% of the total — are mortgage free, according to data compiled by real estate analytics firm Attom. And many more homeowners simply won’t have the luxury of waiting for the next open house season to roll around. They include but are not limited to:

On the latter point, housing bulls will often emphasize what they see as the cosmic shift that’s come from increased working from home. But that doesn’t imply that Americans will no longer move for their jobs. Hybrid work in knowledge-based industries certainly looks poised to endure, yet many companies no longer allow working full time from whatever palm-tree-lined destination their employees choose. As of June, only about 15% of full-time employees are fully remote, according to data from the Survey of Working Arrangements and Attitudes,an online survey of US residents. That’s still much higher than anyone ever imagined before the pandemic, but it still leaves 85% who may have to sell their homes if they get fired or leave their job for a new one in another part of the country.

All told, the early 2023 inventory spike looks unavoidable, and the real question is where mortgage rates will be when the listings hit the market. If inflation continues to moderate, that could lead financial markets to anticipate a change in monetary policy later next year. That would set the stage for Treasury bonds to rally and a corresponding drop in mortgage rates. It’s a race against the clock, though, and you’d have to hope for a near-perfect run of inflation data to assuage jittery policymakers and financial market participants and bring 30-year mortgages back down below, say, 6%. Even then, it’s unlikely that rates will look anywhere near as attractive as the loans that prevailed for most of the past decade, and they might not be enough to keep the market’s delicate equilibrium intact and prices afloat.

To contact the author of this story:
Jonathan Levin at [email protected]