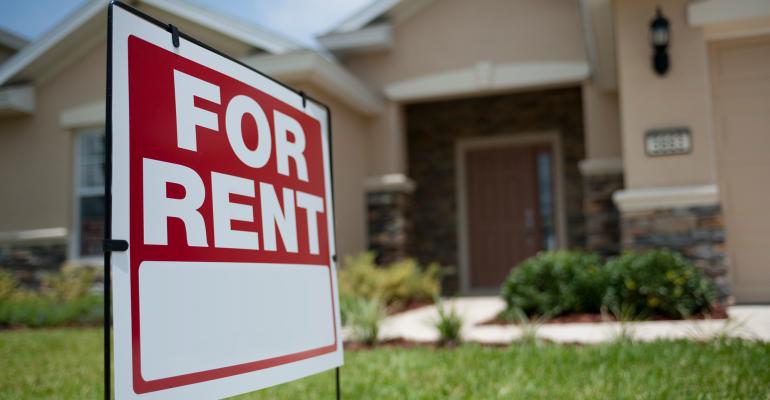 As the single-family rental (SFR) industry matures, some mid-tier investors are finding it difficult to get competitive financing to acquire properties.

It’s an issue that has come to the fore following the Federal Housing Finance Agency’s (FHFA) recent decision to end two pilot programs under mortgage giants Fannie Mae and Freddie Mac to study liquidity in the SFR market.

The FHFA found that big operators—think the Invitation Homes of the world, with tens of thousands of properties—have plenty of access to capital. Meanwhile, operators of six to 10 properties can obtain existing Fannie or Freddie financing.

This, some in the industry say, leaves out the mid-tier investors who own between a few dozen and a few hundred homes, a challenge that has intensified as competition for SFR assets has become tougher and as the industry has grown in the aftermath of the financial crisis.

“There’s certainly a little hole in the market,” says Hubert Hultgren, co-founder of Golden Pacific Capital, a Kansas City, Mo.-based firm that owns 225 SFR homes in the region and was a recipient of a Freddie-backed SFR pilot loan.

It’s one of the reasons why some think the government-sponsored enterprises (GSEs), tasked with expanding affordable renting, should get involved in the space. “There’s definitely a need,” says Greg Rand, owner and founder of OwnAmerica, an online brokerage for occupied single-family rental portfolios. “We hear it every day.”

Golden Pacific’s $6 million Freddie-backed mortgage was for a portfolio of 55 SFR homes, 82 percent of which are affordable. The firm is well-positioned to reinvest in the region, says Hultgren, as Golden Pacific will pour $20,000 to $25,000 to improve a home it acquires, while raising the rent $25 to $50 more a month. Home flippers can also improve neighborhoods, but typically by selling homes at higher price points. “This just wouldn’t happen at as rapid of a rate if we weren’t out there doing this,” he says.

The FHFA transaction provided interest rates that were “a little bit more competitive” than the firm would’ve been able to secure with private lenders, Hultgren says. With time, the financing through the programs “would’ve gotten more competitive,” he says.

But the programs, established in 2017, were shuttered before they could help more mid-level operators, says Daren Blomquist, senior vice president at ATTOM Data Solutions, a real estate analytics provider.

There is a private market providing some liquidity to the mid-tier investor segment, helping them to grow their portfolios beyond 10 properties. But the interest rates aren’t as good compared to what one might be able to get from Fannie or Freddie, Blomquist notes. “That leaves the market at a disadvantage compared to other real estate niches that do have the government backing,” he says.

An FHFA spokesperson said the agency would not comment beyond its press release and a fact sheet that announced the closure of the programs. Based on the information from the transactions it undertook with a range of different-sized firms and its own impact analysis, the FHFA said in its fact sheet that “the market for larger investors has performed successfully without Enterprise participation.”

However, the agency also noted that it “recognizes the potential need for long-term financing for mid-size investors that own affordable single-family rental assets.” FHFA executives, however, feel it’s too soon for them to get involved, “because the effects of their participation on rent growth, long-term affordability, for-sale assets, and homeownership is insufficiently understood without significantly more extensive research and analysis.”

The programs were also not immune from controversy.

Fannie’s first deal under the pilot was a $1 billion loan to Blackstone-backed REIT Invitation Homes, which afterward became the subject of a Reuters expose that described shoddy property management practices and frequent rent increases. Invitation Homes has disputed the allegations.

The Urban Land Institute in 2017 called the Invitation Homes transaction “an important first step.” The organization also questioned the role the GSEs should play to help increase the availability of affordable rental housing—the mission of the GSE’s multifamily business.

Some in the industry, however, saw the deal as supporting a Wall Street firm that already has easy access to capital. Invitation Homes executives have previously said that SFR is “an important and affordable option for many families seeking high-quality homes in communities with good schools and good jobs, and we’re pleased to have partnered with Fannie Mae on this transaction.”

While mom-and-pop operators with only a handful of properties can qualify for existing GSE financing, bigger firms can securitize their mortgages and spend more upfront for assets. And with better financing terms, they can focus on newer neighborhoods with higher quality homes, says Hultgren, who helped found Tricon American Homes, which has 15,000 homes across the country. For example, SFR REIT American Homes 4 Rent said in its latest investor highlights report that its average property age is 15 years and that the company focuses on “high quality properties in desirable neighborhoods and highly rated school districts.”

For mid-tier investors, being able to secure competitive financing terms has become increasingly crucial as the SFR sector continues to flourish.

“The only people that can compete are large institutional buyers. … It makes it more and more difficult for your average investor to get more inventory,” says Brian Spitz, president of home-buying company Big State Home Buyers, LLC.

Though smaller operators make up nearly 91 percent of U.S. SFR owners, the mid-tier cohort—those who own between 11 to 100 properties—is among the fastest-growing. The segment of the market grew 20 percent year-over-year in the first quarter of 2018, making up 6.5 percent of the SFR ownership pie. This growth was second only to those who own between six and 10 properties, a segment that grew by 21 percent, according to ATTOM. Meanwhile, those who own 100 and more homes make up the smallest percentage of the ownership pie, 2.6 percent, but they too are growing—this segment saw growth of 9.0 percent during that time.

Spitz, who owns “several dozen” single-family rental properties throughout Texas and does a lot of borrowing from small, private banks, says he is an investor who could have benefitted from the FHFA programs. SFR operators can aggregative private funds and borrow money from local banks on commercial lines, but Spitz says the GSE’s entrance into the space could have resulted in more favorable financing terms from other lenders, making it easier to acquire properties while also incentivizing more lenders to enter the space. “It just made the terms more flexible,” he says.

The government programs could have helped the mid-tier segment grow quicker, Blomquist says. “I think the government, the GSE-backing, would’ve accelerated that, but we were already seeing that growth and I think it was a result of some of the private companies coming into that space outside Fannie and Freddie,” Blomquist adds.

There are others who say the GSEs aren’t needed in the space, pointing to the overall strength of the SFR sector. The demand for the properties—from both potential tenants and investors—is strong, and there is room for operators in many markets to raise rents.

Rick Palacios, director of research at John Burns Real Estate Consulting, says the capital is there for mid-tier players. Local lenders, banks and private equity players have made it easier to get capital; there has also been the rise of platforms like CoreVest that have made capital more accessible to more owners. “It’s really all outlets, from a capital perspective, that are looking at this industry favorably,” Palacios says.

Still, the growing competition in the space is putting pressure on mid-tier operators that doesn’t look to be easing any time soon.

“The financing structure is extremely important to one’s ability to have long-term success in the SFR space,” says Jeff Pintar, founding partner and CEO of Pintar Investment Company, a California-based single family and commercial asset firm with about 400 properties in the Southwest, Midwest and Southeast.

Single-family rental portfolios are a great investment to accumulate wealth, Pintar says, but the cash flows may not be great for those looking to buy a handful of homes. “If you’re looking to live off the income, it’s going to be very difficult if you need debt to make your acquisition,” he says. “The cost of that debt is just becoming more and more expensive as rates rise.”