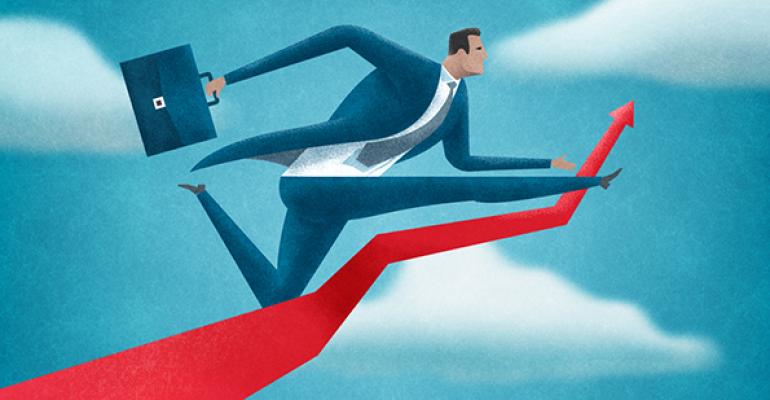 The independent channel is still the fastest growing advisory model, a trend that should continue despite the rise of robo-assisted, do-it-yourself investors.

In the financial advisory industry there are potential regulatory burdens, fickle investors, and crafty competitors—but nothing has changed the relentless march of the registered investment advisor space since the 2008 crash.

RIAs have drawn advisors and assets from the wirehouses and other brokerage segments at an impressive pace; Aite Group, the Boston-based research firm, notes the independent RIA channel is the only one in the industry to grow market share since the crash, taking a 13.7 percent share of $17 trillion in client assets in 2013.

And RIAs don’t seem to be letting up this year. Cerulli Associates of Boston estimates that independent RIAs and dually registered firms will reach a combined market share of 23 percent of assets this year, rising to almost 28 percent by 2018. Underlining that growth is the stepped-up pace of mergers and acquisitions. DeVoe & Company of San Francisco says 2015 is likely to see a record amount of activity, following a best-ever first quarter with 34 deals accounting for $90 billion in assets. Those assets are 43 percent higher than the combined level of all 90 deals completed in 2014.

“The sellers are definitely a bit more serious. I think there are more willing sellers because valuations are up,” says John Furey, principal and founder of Advisor Growth Strategies, a consultancy in Phoenix. “It’s been an ongoing secular trend for independent fee-based advice. I think it’s real. The market’s up and the pie is growing.”

The appeal of the RIA model, including a fiduciary standard that holds advisors to act in the best interests of their clients, is appealing to some advisors who want to break off from wirehouses and go out on their own. Wirehouses are still the 800-pound gorilla; Aite estimates they held 36 percent of assets last year, the largest share of any segment in the industry, although it’s fallen from 41.6 percent in 2007 and will remain roughly flat through 2017, the researcher predicts. David DeVoe, managing partner and founder of DeVoe & Co., notes that compensation packages which wirehouses offered their top brokers to remain with the firms following the crash are expiring, freeing those advisors to do their own deals and boosting M&A activity in the process.

Their options for independence have grown in recent years as well, as new companies have formed to help outsource compliance and back-office functions for independent advisors, or offer to share their platforms. Elliot Weissbluth, CEO of HighTower, the Chicago-based RIA aggregator and service provider with $30 billion in advisor assets, says the pipeline of potential partners has never been deeper. “There’s a consistent stream every month of advisors leaving the wirehouses and going to several different models. How many independent advisors do you ever see going back into the wirehouse?” he says. “The confidence level inside the community that’s looking to make a change is significantly higher today than it’s ever been. Breaking away and … setting up your own RIA is no big deal.”

Asset growth isn’t necessarily a surprise over the last five years, since stock markets have risen dramatically from the depths of the crash and bolstered the size of investors’ portfolios. But those in the RIA industry are seeing organic growth as well. Charles Schwab, the largest RIA custodian with 7,000 client firms and $1.1 trillion in assets, reported strong performance among its businesses with AUM of $250 million and up. Median AUM rose 67 percent to $620 million from 2009 to 2013; revenue was up 71 percent to $3.6 million. Schwab says nearly half of the AUM growth results from new client acquisitions and a greater share-of-wallet from existing clients.

Similar trends surfaced in a 2014 study of custodian Pershing Advisor Solutions’ top advisors. It saw a median AUM growth rate of 21 percent, says Gabriel Garcia, director, relationship management. About 12 percent of the growth was organic, he estimates. With memories of 2008 still fresh in many advisors’ minds, the philosophy is to grow your assets as much as you can in the good times, because when things head south, a greater portion of your time is spent hand-holding nervous clients, Garcia says. And growth strategies are not a luxury, even for small “lifestyle” practices where the owner is feeling comfortable about his size. “Even if you want to maintain the business you have at the level you have, there’s a natural turnover that occurs,” he says. “You need to grow your business at some modicum level just to hold the status quo.”

And yet while RIAs bask in continued growth, the financial industry is evolving in ways that may challenge the segment but also provide fresh opportunities. So-called “robo-advisors” are emerging—online platforms that use algorithms to structure and manage investor portfolios at low cost and with little or no advisor involvement. Firms like Wealthfront, Betterment, and FutureAdvisor are appealing to low-wealth investors whose assets often preclude the interest of advisors who prefer to cater to the high-net-worth crowd. Some in the RIA industry now say this approach may be a solution for advisors who are looking to connect with millennial-generation investors whose relatively low net worth has historically discouraged advisor attention.

In June, Schwab rolled out its Institutional Intelligent Portfolios platform for RIAs. The program allows advisors to build a diverse group of client portfolios using more than 450 ETFs drawn from major fund families, along the lines of four strategies: taxable and IRA-specific portfolios, municipal bond portfolios, and income portfolios. Schwab also is offering advisors a web portal and mobile app on which the advisors can imprint their own RIA brand and provide performance reporting to clients.

Bernie Clark, president of Schwab Advisor Services, says the new technology dovetails with the needs of millennials who are looking for simple, low-cost investment solutions and prefer using tech to track their progress. Also, advisors often have low-asset friends and family members of clients; Clark believes the portfolios product can be an efficient solution for younger people who may grow into deeper relations with advisors.

Some firms already are partnering with companies offering robo-services. Last year Fidelity Institutional said it would collaborate with LearnVest to provide client access to LearnVest’s financial planning and wellness programs, with an eye on using them to strengthen advisors’ business of workplace retirement programs. Fidelity also collaborates with Betterment to share its digital service platform with emerging affluent clients.

Not all FAs are rushing to participate in the new technology, and some perceive it as a threat, according to a Pershing-sponsored survey in June of RIAs, wirehouse brokers and other advisors. Nearly two-thirds of those polled are “somewhat” or “very” familiar with digital advice, yet only 5 percent currently are employing it in their business. Almost a quarter feel it represents competition. Garcia says advisors would be wise to consider how the ways they add value to their clients’ relationships can differentiate them from robo services; they also need to consider how effective are the digital tools they are providing their clients, and how they’re engaging with clients in a world of rapidly changing technology.

“Folks like to be mobile, they want 24-7 access, and how those experiences are delivered are extremely critical,”
he says.