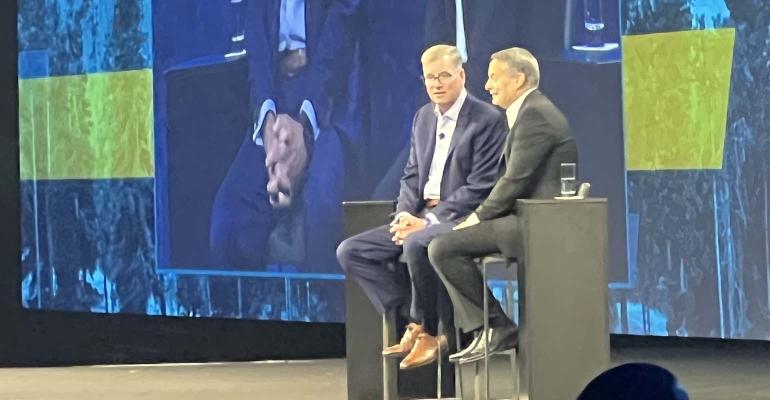 At IMPACT 2022, Schwab Is Asking for Patience and Making Promises

As RIA custodians Schwab and TD Ameritrade come together, advisors want to know what to expect.

Schwab Advisor Services kicked off its annual IMPACT conference Tuesday, hosting 5,000 live attendees, half of them advisors, in Denver after two years of virtual events. This week also brings advisors on both the Schwab and the TD Ameritrade custodial platforms together for the first time since the former acquired the latter in 2019.

Since 2019, a lengthy, often criticized integration process has been underway and is now expected to culminate with the conversion of TD advisors to the new platform on Labor Day weekend 2023. The merger makes Schwab the largest RIA custodian by a wide margin, with more than half of all assets managed by registered investment advisors.

Many are at IMPACT to learn what the future will look like as the integration continues, a question that Schwab CEO Walt Bettinger and Schwab Advisor Services Managing Director Bernie Clark endeavored to answer.

“We know that we’re coming up and on the precipice of this really big event, the integration of two great models,” Clark told advisors. “But we also know that it’s going to be a critical time, and we need to start getting ready for that. It won’t be without incident, unfortunately, but we’ll be there for you, I promise you that.”

Bettinger said perfection is the goal but promised a “world-class recovery” in cases where Schwab inevitably falls short.

“We know it's more complicated, it's more expensive,” he said. “It's probably taken a little bit longer than ideally.”

Both Bettinger and Clark pointed to the size and scope of the project, saying that quality and functionality are worth the additional time and money. Bettinger also pointed to the invasion of Ukraine and subsequent breaking of ties with Russian technology providers who worked on some of TD’s most desirable platforms, such as thinkorswim and thinkpipes, saying that it required the hiring and training of “dozens and dozens of people.”

“We feel really good about where we are today,” he said. "We want to be transparent, just as you are with your clients, and honest about the dynamics in the background.”

“Integration is always challenging,” said industry veteran Ric Edelman, who founded and grew the $260 billion AUM Edelman Financial Engines before creating the crypto education organization Digital Assets Council of Financial Professionals. “And integration of this size is daunting. This is why Schwab is taking its time, going slowly and methodically to get it right and to minimize any disruption. It's always bumpy, it goes with the territory. I'm confident that Schwab is managing it as well as could be done.”

“Everybody wants to see how this integration goes with TD,” said Vince Fertitta, president of multicustodial RIA platform Sanctuary Wealth. “The people that are at Schwab are wondering if this is going to take resources from them or they can’t wait to get their hands on some of the TD technology. And TD is walking around here and they’re going, ‘Wow, this is massive. What is this going to be like?’ So, I think that’s kind of the buzz of this event. A little bit of positive and some concern.”

Despite repeated assurances of Schwab executives that there will be no asset minimums to custody on the platform, and the firm will serve advisors of all sizes, Fertitta said he wasn’t sure whether smaller TDAI firms, those with under $100 million in assets, would ultimately find a welcome home on the Schwab platform. But he said that firms like Sanctuary could help those smaller advisors plug into the custodian as part of a larger organization. “We're an enterprise partner of Schwab,” he said. “We can help them plug into one of our partner firms and kind of tuck into one of those, stay on Schwab and have everything they're used to.

“So, I don't know if they'll do that or not, but if they did, it would kind of be a windfall for Sanctuary.”

Schwab executives have said repeatedly there will be no minimum asset requirements for RIAs, and that the firm will serve advisors of all sizes.

Clark also repeated claims that no repapering of clients will be required, pushing back on some media reports that suggested otherwise, and that Schwab has no intention of implementing custodian fees—even in challenging market environments.”

“We're not going to have a custodial fee at Charles Schwab,” he said to scattered applause. “We're going to succeed with scale.”

According to Edelman, Schwab has no reason to implement custodial fees anytime soon.

“There's too much competition in the marketplace and too many fundamental economics that reduce the likelihood that will occur,” he said. “There are a wide variety of revenue sources within this industry that reduce or eliminate the need for Schwab to charge a custody fee to advisors.”

Edelman even suggested Schwab's stock might be an attractive investment, as it is positioning itself to be one of the major players in the industry.

“This is not a nonprofit organization,” he said, calling the stock “one of the best investment opportunities that advisors might consider.”