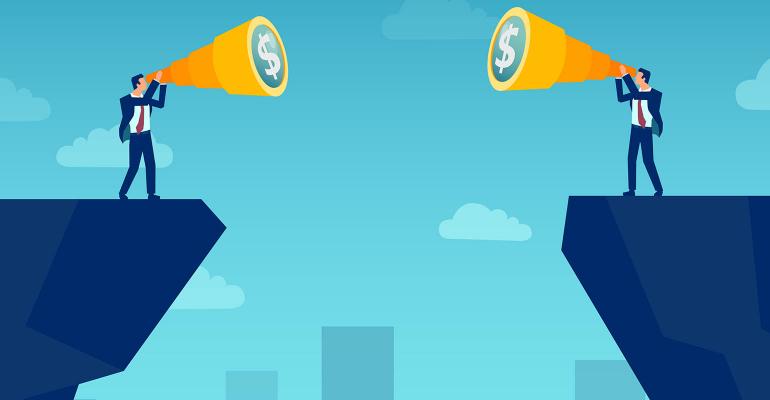 The latest Echelon Partners RIA M&A report shows that transactions have slowed and deal sizes are smaller relative to the end of 2021, but 2022 is still on track to be another record-breaking year.

Sustained momentum will likely result in another year of record-breaking mergers and acquisitions activity among registered investment advisory firms, according to a report released this week by Echelon Partners, a boutique investment bank specializing in M&A and succession planning for the wealth and investment management industries.

RIA firms have been breaking M&A records year after year for about a decade. Now, halfway through the year and with a record 181 deals closed, 2022 appears it will remain on track to beat last year’s record—but Echelon analysts predict it will only do so by a hair.

After reaching an all-time high in the fourth quarter of 2021 with 99 deals, the number of transactions decreased in both subsequent quarters (to 94 and then to 87) while still combining for a record-breaking first half that represents a 39.2% increase over the first half of 2021. The 87 deals in Q2 of this year were a 61% increase over the 54 deals that closed in the second quarter of 2021.

Even so, the report suggests market conditions will dampen some of the enthusiasm that abounded in the second half of 2021, continuing the downward trend and resulting in nearly identical year-end totals. While 2021 saw 307 M&A transactions among RIAs, Echelon expects only 308 this year.

According to Echelon CEO Daniel Seivert, the record number of deals closed during the fourth quarter of last year was at least partially due to an urgency caused by potential tax code changes in the new year. The absence of that factor in 2022 contributed to the “conservative estimate,” he said, but a number of other considerations could ultimately result in a higher year-end total.

“The year-ago comps are relatively difficult, particularly for the fourth quarter, so it’s feasible that we’ll see a year-over-year decline in the second half,” agreed Peter Nesvold, partner at M&A investment bank Republic Capital. “However, all indications are that activity will remain elevated for at least the next several quarters.”

Along with the number of deals, their size has also begun to decline from 2021 record levels. Average YTD assets under management being transacted fell by 12.1% compared with all of 2021, dropping once again below the $2 billion mark as smaller acquisitions became more common. (Data excluded transactions over $20 billion.) Deals involving $1 billion AUM or more decreased by 20.9% from the last quarter of 2021 to the second quarter of 2022—from 43 to 34.

Seivert, Nesvold and Brandon Kawal, principal at Advisor Growth Strategies, a management consulting and transaction advisory firm that also tracks industry M&A trends, all pointed out that firm valuations are not seeing a correlated decline.

"We are seeing some softening but overall stability," said Kawal. "In the near term, we expect buyers will decide to be 'in or out' versus trying to acquire at a low valuation. This contributes to lower deal volume expectations for the second half."

Four of the 10 largest Q2 transactions by seller AUM involved private equity infusions. Two more were debt financing raises, and acquisitions by turnkey asset management platforms Morningstar and AssetMark made the list. Advisor Group was the only broker/dealer in the top 10 after acquiring both American Portfolios and Infinix Financial Holdings—with $40 billion and $30 billion AUM, respectively.

“The buyer makeup for the industry’s largest deals continues to be notably different than that of the broader wealth management industry with more activity by banks and private equity firms,” wrote the report’s authors. “The most notable private equity transaction of the second quarter is the recapitalization of Cerity Partners led by Genstar Capital. The transaction values Cerity Partners at approximately $1.6 billion and was for a controlling stake in the firm.”

Pointing out that Cerity's previous partner Lightyear Capital is remaining a minority stakeholder following the transaction, the Echelon report maintains this is a trend likely to continue due to market growth dynamics.

Powered by private equity, consolidators and strategic acquirers remain the most active dealmakers, accounting for 46% of the YTD total, or 83 deals. This is about on par with their participation in 2021, when that cohort began acquiring in earnest. Likewise, banks remain on the other end of this spectrum, announcing only three transactions in Q2 and bringing their YTD share to a meager 2.7%—however, all three transactions involved sellers with more than $1 billion in AUM and the $75 million in debt financing provided by First Citizens Bank to the $13 billion RIA Homrich Berg was among the quarter’s above-mentioned largest deals.

RIA-to-RIA M&A, while remaining below pre-2021 levels, still accounts for nearly 25% of all deals closed in 2022. According to the report, the diminished share is due primarily to the increasing prevalence of strategics and consolidators, the introduction of new buyer types and the rising valuations to which both have contributed.

In the ‘Other’ category, which comprises 27% of all deals in the first half of the year (the same as all of 2021), private equity investors and asset managers have been joined by TAMPs such as Morningstar, AssetMark and Orion.

The report called Morningstar’s acquisition of the $19 billion SMArtX Advisory Solutions “an example of the continued convergence of the wealth management and Wealthtech sectors.

“Meanwhile, AssetMark’s acquisition of Adhesion and Orion’s deal with TownSquare Capital demonstrate the consolidation trend within the TAMP sector that mirrors that which is occurring in the broader wealth management industry,” it said.

Year-to-date, private equity-backed RIAs are leading the M&A pack by volume, with Creative Planning topping the list with 12 deals, followed by Mercer Advisors with 10; Beacon Pointe Advisors with eight; Mariner Wealth Advisors with seven; Wealth Enhancement Group with six; and Cerity Partners and Merchant Investment Management both with five. (Mercer, Mariner, Beacon Pointe and WEG also appeared on the most active acquirer list for 2021.) Of the deals that have taken place in 2022, 66% (121) involved companies that have completed at least two deals this year.

“These firms have business models centered around scale and use M&A to drive growth,” the report noted.

“Firms continue to look overseas for buying opportunities as the U.S. wealth management M&A market has become increasingly competitive,” according to the report. “Over the past two years, valuations have increased, and private equity investors have enabled large strategics to act on their consolidation efforts.”

Finally, Echelon expects that increasing M&A activity in the industry’s wealthtech subsector is a trend that is likely to continue as firms look to capitalize on ongoing innovation in the space.

“TAMP behemoths are committed to building new service lines and scaling current client bases via M&A,” according to the study.

“I can’t emphasize enough how resilient the M&A market has been for RIAs,” said Nesvold. “For instance, consider the fact that M&A volume across all industries was down roughly 30% year-over-year in the first half of 2022, but it actually increased—albeit modestly—in the asset and wealth management sector.”

"Sophisticated buyers will be picky about the deals they execute in the second half,” predicted Kawal. “The confidence level must be very high in the team, business model, etcetera, because the market won’t mask perceived risks in the transaction."