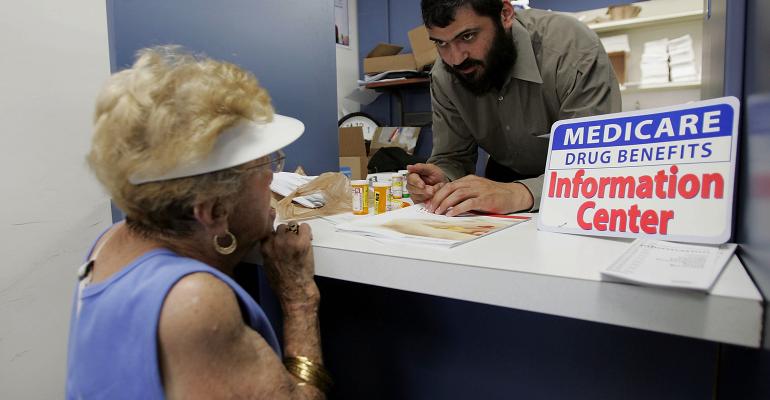 When your clients sign up for Medicare, they are about to make one of the most consequential insurance decisions of their entire retirement—and they probably don't know it. And I'll bet you don't know it, either.

I refer to the choice between traditional fee-for-service Medicare and Medicare Advantage, the privately offered, managed-care alternative to the traditional program. This choice is consequential because choosing Advantage at this point can be effectively irreversible later in retirement. And I hope to convince you that it is the wrong choice.

Advantage has been gaining popularity in recent years—enrollment is expected to account for 47% of all Medicare beneficiaries in 2029, up from 34% this year, according to the Kaiser Family Foundation.

These selling points are reinforced in the barrage of industry advertising, and even in messaging from the Centers for Medicare and Medicaid Services, which administers Medicare and has taken on the informal role of Advantage cheerleader during the Trump era (which likely is a violation of federal law).

But traditional Medicare remains the best choice for your clients when you consider their health insurance needs over the course of a retirement likely to last many years. When combined with a supplemental plan and stand-alone Part D prescription drug plan, the traditional program does the best job of protecting your clients from high—and unpredictable—out-of-pocket costs, and it provides important flexibility in accessing health care.

Why is the decision irrevocable?

Technically, it's possible to switch back and forth between traditional and Advantage annually, during the fall enrollment period. So, your clients might decide to initially go for Advantage, thinking that they can always change later if necessary.

But this approach misses one of the least understood aspects of initial enrollment: The best—and perhaps only—time to buy a Medigap supplemental plan is during the six-month period after signing up for Part B.

During this time, Medigap plans cannot reject an applicant, or charge a higher premium, because of preexisting conditions. After that window closes, applicants can be rejected or charged more, unless they are lucky enough to live in a state that provides additional guaranteed enrollment without medical underwriting. (Connecticut, Massachusetts and New York have continuous open enrollment, with guaranteed issue rights throughout the year, and Maine requires insurers to issue Medigap Plan A during an annual one-month open enrollment period.)

Supplemental coverage is a must for traditional Medicare enrollees. In 2016, out-of-pocket spending in the program averaged $3,166, excluding premiums, according to the Kaiser Family Foundation.

Supplemental coverage sometimes comes from a former employer, a union or Medicaid; for anyone else, the choice is a Medigap plan.

Let's say your client opts for Advantage initially and encounters a serious illness a few years later. At that point, the network limitations of Advantage—most are HMOs—could be a big issue if she wanted to use a physician or medical center that is out of network. But switching to traditional Medicare would be an option only during fall enrollment—and the preexisting condition would likely make a Medigap purchase impossible.

The upfront savings with Advantage can seem compelling. But in many respects, these plans function like high-deductible insurance plans with a few extra benefits tossed in. Since 2011, all Advantage plans have been required to cap out-of-pocket expenses at $6,700, but most HMO or PPO plans have a somewhat lower ceiling—last year, it was $5,059 for in-network services, according to Kaiser.

Very little is known about the details of out-of-pocket spending in these plans, as the spending pattern data is far more opaque that it is in the traditional program.

Traditional Medicare plus Medigap provides lifetime predictability on out-of-pocket costs. For example, a Medigap D plan covers 100% of coinsurance for Part A (hospitalization) and Part B (outpatient services), including hospice care and skilled nursing facilities. It also covers Part A and Part B deductibles.

Part A out-of-pocket costs are especially worth considering. This year, a hospital stay comes with a $1,408 deductible for each “benefit period” and coinsurance charges kick in for stays longer than 60 days.

Medigap plans are not cheap—premiums average more than $2,000 a year, according to the Medicare Payment Advisory Commission, which advises Congress on Medicare policy. But if you think of this as a typical insurance investment aimed at smoothing risk, it makes sense—especially for clients with resources to handle the premiums comfortably.

Plan costs vary by type and region. Another variable is the type of “rating.” There are three approaches used by insurers:

Quality of care a provider choice

Aside from costs, a range of questions about quality and access to care swirl around the Medicare Advantage program.

Since these are managed care programs, a key trade-off is acceptance of network limitations. That can be problematic when a serious health problem occurs. And it can be difficult to determine if a specific health provider is in network or not. A review of provider directories by Medicare found that 49% contained at least one inaccuracy. Errors included incorrect locations and phone numbers, and whether a provider was accepting new patients.

What’s more, networks can change even after your client enrolls in a plan.

The best-known example of this problem occurred in 2013 when UnitedHealthcare jettisoned approximately 2,250 providers and health care facilities from its Connecticut Medicare Advantage network, including Yale New Haven Hospital. (When provider switches occur during an enrollment year, patients now have some limited rights to switch plans if they choose to do so.)

On quality of care, the evidence is mixed.

But critics point to high levels of denial of care. Federal investigators reported in 2018 that Advantage plans had a pattern of inappropriately denying patient claims. The Office of Inspector General at the Department of Health and Human Services found “widespread and persistent problems related to denials of care and payment in Medicare Advantage” plans. And health care providers and enrollees often complain about jumping through all the usual managed care “prior authorization” hoops with plans.

My bottom line: There is a simple equation for maximum-strength health insurance coverage in retirement. It goes like this: traditional Medicare + Medigap + stand-alone Part D drug plan = gold standard Medicare.

Advise clients to stick with that equation—you won’t regret it.

Mark Miller is a journalist and author who writes about trends in retirement and aging. He is a columnist for Reuters and also contributes to Morningstar and AARP The Magazine.