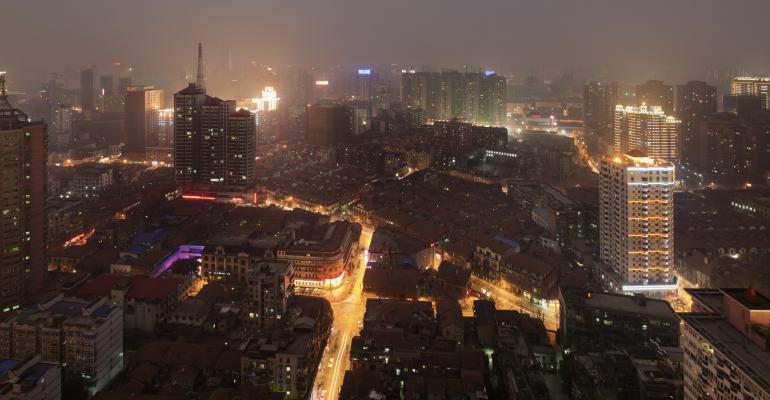 Tenants of one of Wuhan’s largest malls are demanding rent cuts as a result of having no business during the shutdown.

(Bloomberg)—Dozens of small shop owners protested outside one of Wuhan’s biggest shopping malls to demand a cut in rent, in one of the first signs of unrest since authorities lifted a lockdown at the epicenter of the coronavirus outbreak.

Sitting down about one meter apart, the shop owners on Friday sat or kneeled outside the Grand Ocean Department Store, wearing masks and holding placards as police monitored. A day earlier they chanted “Exempt rental for a year, or refund the lease” in videos uploaded on the Chinese social media platform Sina Weibo that were quickly censored.

“Can’t survive” said a sign held by one woman who rented a stall at Grand Ocean, which also called on the landlord to return the rent and security deposit during the period of the lockdown.

The woman said the property developer in charge of the mall, which translates to World City, should exempt rent for them because 99% of protesters are small shop owners and they haven’t had any business since the virus outbreak. Most neighborhoods in the city are still facing string restrictions on movement and there’s little business traffic.

Another protester said the government didn’t respond after their protest yesterday, and said the police had assaulted people on Wednesday. None of the protesters Bloomberg spoke with revealed their names due to concern of retribution.

A woman who answered the phone at World City said they haven’t restarted work and couldn’t answer questions. A call to Grand Ocean’s general office was not answered.

Wuhan officially emerged on Wednesday from a mass quarantine put in place on Jan. 23. The strict restrictions helped China stem the outbreak of the deadly disease known as Covid-19, but it also led to a deep slump in investment and consumption that pushed the economy into its most dire situation in decades.

The demonstration, however small, shows the challenges President Xi Jinping now faces in getting millions of people back to work all while preventing a second wave of infections. Early in the crisis, Xi warned the virus posed a threat to “social stability” in China, and since then he’s seen tensions flare both within the country and with the U.S., its main export market.

The protest in Wuhan this week comes after earlier violent clashes on the border of surrounding Hubei province and neighboring Jiangxi province in late March. Scenes captured on videos posted on social media showed Hubei police clashing with officers from Jiangxi who wanted to keep the border closed.

China has recently signaled its desire to deal with any signs of dissent harshly. Earlier this week, Chinese authorities placed outspoken property tycoon Ren Zhiqiang under investigation after a copy of an essay widely attributed to him criticizing the government’s virus response was circulated on social media.

--With assistance from Peter Martin.

To contact Bloomberg News staff for this story: Sharon Chen in Wuhan at [email protected];

To contact the editors responsible for this story: Brendan Scott at [email protected]