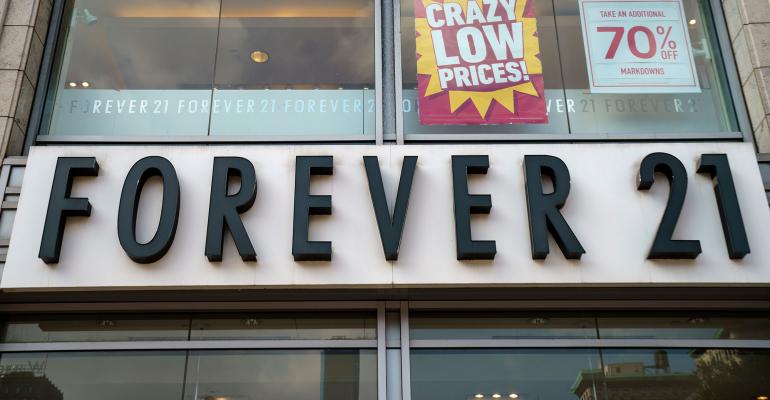 Would Simon, Brookfield Investment in Forever 21 Make Sense for Both Parties?

The landlords do have a vested interest in seeing one of today’s largest mall anchor tenants survive.

Struggling fast-fashion retailer Forever 21 Inc. may be positioning itself for bankruptcy, but with a possible twist.

Giant mall landlords Simon Property Trust and Brookfield Property Partners are reportedly in negotiations to acquire a stake in the ailing retailer. The move would mirror the strategy that the duo took with bankrupt Aeropostale three years ago.

Forever 21 could sell a stake to the two REITs as part of its restructuring plan, according to a Bloomberg report. Simon and Brookfield are Forever 21’s largest landlords. The chain has more than 800 stores globally.

Forever 21 co-founder Do Won Chang reportedly isn’t on board with any such plans, however. He has been focused on keeping control of the company.

But a group of Forever 21 company officials, without Chang’s consent, asked Simon and Brookfield to consider buying a stake in the company “amid a disagreement within its leadership,” Bloomberg reported. There appear to be differing opinions on how to turn the company around. Like many retailers, it’s suffering from weaker sales, increasing online competition and changing consumer shopping habits.

If such a deal were structured with Simon and Brookfield, Bloomberg noted that it would allow Chang to retain a share in the company.

Los Angeles-based Forever 21 has reportedly been preparing for a potential Chapter 11 filing after struggling to secure additional financing. The retailer could file bankruptcy as early as this month.

It has also been reported that a restructuring plan could call for the retailer to close at least 100 locations. Closures would mean landlords like Simon and Brookfield would take a huge hit, as Forever 21 occupies significant spaces in many of their malls. These potential vacancies are driving the landlords to consider a unique strategy to help rescue Forever 21 from the same demise as many other retailers. To date, CoreSight Research is already tracking 8,567 store closures in 2019.

Simon and Brookfield, along with Forever 21 company reps, are reportedly in talks about reduced rent and other considerations in exchange for a share in Forever 21. Neither Forever 21 nor Simon responded to requests for comment about a possible deal and a Brookfield spokesperson declined to comment.

Did Aeropostale help set a precedent?

In 2016, General Growth Properties, which is now owned by Brookfield, and Simon—along with licensing firm Authentic Brands Group—partnered to save Aeropostale by buying the bankrupt teen clothing chain.

Now it looks like they’re eyeing more possible deals. Simon CEO David Simon told analysts on a recent post-earnings conference call that his company would look at other opportunities to invest in distressed retailers. “We certainly have the ability to help beyond what you might do on the leases [and] become an investor in a distressed situation,” Simon said. We’re “certainly as good as the private equity guys, when it comes to retail investment. And so, I wouldn't rule it out,” he continued.

Simon added that the company made a “ton of money in [Aeropostale]” and would work together again with Authentic Brands Group on other distress situations, as long as the retailers’ involved had the requisite size and brand equity.

Will it work for Forever 21?

“Aeropostale set this model,” notes Jan Rogers Kniffen, a retail consultant and founder of New York City-based J. Rogers Kniffen Worldwide Enterprises. “The strategy is pretty straightforward. Simon and Brookfield have a lot of malls. Getting interesting tenants to fill space is not easy. If the mall owners can pick up the businesses out of bankruptcy on ‘the cheap,’ and their investment is minimal, they keep the space full with a recognizable brand.”

On the other hand, if the business they invest in doesn’t really work, the two landlords can manage an orderly wind-down and restructuring and maximize whatever benefit there is to them as owners, Kniffen notes.

“No one else is going to do that,” so Kniffen expects to see more of these types of buyouts.

It’s a deal that makes sense

“I think it makes complete sense and is wise for Simon and Brookfield to be considering this,” says Dan Sheridan, a partner at Hoffman Strategy Group, a Lincoln, Neb.-based boutique commercial real estate advisory firm specializing in retail and mixed-use. He previously worked for General Growth Properties.

Plus, that type of deal would allow Simon and Brookfield to really get an inside view of the retailer’s operations. It would help them “understand efficiencies, inefficiencies, how they make money, where there may be opportunities to make more money, which I think could help Simon and Brookfield across all of their retailer relationships,” Sheridan notes. “I think it’s an interesting potential opportunity.”

The buyout deal would also make sense for Forever 21. It would give them a way to get out of a distressed situation with investors who are interested in the long-term success of their chain. As landlords, Simon and Brookfield are “not looking for a short-term investment, ‘make your return and get out,’ which is what some of the investors in the retail world have done over the last several years.”

What about other landlords?

On the flip side, in situations where there is a two-mall market and one of the malls is owned by Simon or Brookfield and the other mall is owned by another landlord—but both have Forever 21 stores—does that put that other mall owner at some kind of disadvantage? Sheridan asks.

“If Forever 21 has to close stores, you have to think they’d be less likely to close the store where one of their owners has it in their mall vs. the other mall,” he says.

And even if it’s not about closing stores, Brookfield and Simon might be able to get more favorable terms on Forever 21 leases than other landlords.

Not such an easy fix

There are dissenting opinions in the industry, however. Simon and Brookfield are doing this for all the wrong reasons, says Nick Egelanian, president of SiteWorks Retail Real Estate Services, a retail real estate consultant firm based in Annapolis, Md. “Their investments will not fix what is wrong with Forever 21, or for that matter any other retailer,” he says.

There are several different reasons retailers are failing and there are different consequences for different landlords, he notes. Mall REITs are facing the most difficult situations, he notes, and these kinds of investments will not correct any of the underlying circumstances bringing about retail bankruptcies nor relieve their consequences.

He points out that markets have already devalued most lower-quality malls by up to 90 percent; however, he believes there’s considerable confusion regarding the outlook for class-A malls.

“A-malls will generally survive this fundamental realignment of U.S. retail by maintaining market-wide, best-in-class, higher-end offerings,” Egelanian notes. “However, most will need to contract the amount of small shop space they currently have to match lower market demand and repurpose unused anchor space. With all of this in mind, saving inefficient and duplicative retailers like Forever 21 is not a sound long-term strategy. It’s nothing more than a temporary band-aid.”