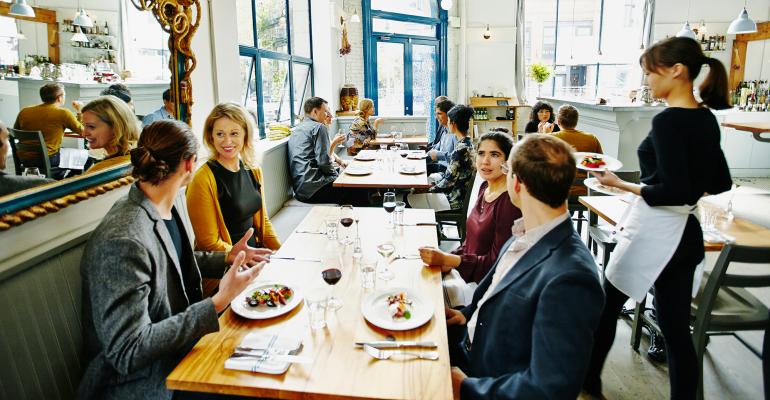 Will Inflation Derail the Recovery in Restaurant Dining and Leasing?

Simmering demand from Americans who missed dining out during the pandemic boiled over in late 2021, resulting in more restaurant visits and increased consumer spending. But inflationary pressures could force consumers to economize, thereby jeopardizing the restaurant industry’s recovery and disrupting retail leasing momentum.

“The biggest shock to me is how well restaurants have been doing,” says Ryan Ash, project director for Vestar, a Phoenix-based shopping center owner with a 30 million-sq.-ft. portfolio located across the western United States. “When you look at their sales numbers, it’s just truly astonishing. Some of these groups are doing over $2,000 per foot in sales—far exceeding what they were posting in 2019 when the world was in a normal condition. They’re hitting percentage rent across the board for the most part, which is great for landlords.”

Related: Why Demand for Retail Pad Sites Is Intensifying

At the same time, Ash is uncertain as to what is driving the strong performance—the combination of restaurants partnering with delivery services or people spending more money on food. “Whatever it is, it’s really remarkable to see how great they’re doing.”

In the first quarter of 2021, the third round of stimulus payments, the arrival of COVID vaccines and relaxed pandemic restrictions helped increase online and physical visits to U.S. restaurants by 3.0 percent compared to the same period a year before, according to market research company The NPD Group.

Related: Some Retailers Are Opening New Stores. But Who Are They and What Do They Ask For?

But the trend reversed during the first quarter of 2022, with online and physical restaurant visits declining by 2.0 percent over the same period in 2021. Consumer restaurant spending, which reflects higher costs as opposed to increased visits, was up 4.0 percent in the first quarter compared to the year before, when spending rose by 7.0 percent.

“The comparison to last year’s gains in the first quarter and several factors in the macro-environment, including higher food and energy prices, contributed to the first quarter’s softness,” says David Portalatin, food industry advisor for NPD and author of Eating Patterns in America. “With the first quarter behind us, I’m optimistic that seasonal demand and the improving on-premises trends can help get the restaurant industry’s recovery back on track.”

But Portalatin’s expectations could end up unrealized. New data from Revenue Management Solutions shows restaurant traffic in April 2022 was down 9.4 percent year-over-year. The Tampa, Fla.-based restaurant data firm noted that sales haven’t been hit quite as hard because restaurants have raised menu prices to offset widespread inflation. However, lower traffic volume suggests that consumers may finally be reaching their limit.

At the beginning of the pandemic, restaurant sales and restaurant leasing activity took huge hits. Since early 2020, more than 100,000 restaurants have closed permanently due to the pandemic, according to the National Restaurant Association.

Though chain restaurants and independently owned eateries both suffered, many mom-and-pop operators lacked the financial wherewithal to survive the shutdowns and reduced foot traffic. Likewise, a large percentage of urban restaurants that relied on office workers to pay their rent shuttered their locations.

“A lot of the weaker players in the restaurant space didn’t survive the pandemic, and now we’re in a situation where the strong have gotten stronger,” says R.J. Hottovy, head of analytical research for Los Altos, Calif.-based Placer.ai, which provides location analytics and foot traffic data. “A lot of companies have very aggressive expansion plans—not just traditional stores, but also new formats.”

From 2015 to 2019, the amount of occupied restaurant space in the U.S. remained essentially flat, according to real estate data firm CoStar. In 2021, however, the amount of occupied restaurant space increased by 1.0 percent, and in the first quarter of 2022, it increased by 0.8 percent. “It’s taken some time, but restaurant leasing has come back,” says Kevin Cody, a strategic consultant with CoStar Advisory Services in Charlotte, N.C.

Restaurant space at Vestar’s properties is almost fully occupied, according to Ash, who says the firm has experienced “insatiable demand” from restaurant operators. “Expanding national and regional chains are aggressively seeking space, particularly second-generation restaurant space,” he notes. “Because restaurant space is so incredibly expensive to build out, second generation space is a gem in the market. When we’ve had a pandemic-related closure, we have been able to backfill it almost instantaneously.”

With demand so strong, Vestar has been able to achieve strong rent growth from restaurant operators. Starting base rent for second generation space is at least 10 percent higher now than it was pre-pandemic, according to Ash. Moreover, his firm is “adamant” about annual rent increases and percentage rent clauses.

Increased adoption of delivery and pick-up

Though most of the U.S. has abandoned mask mandates, millions of Americans still aren’t comfortable with indoor dining. And many who are comfortable with it don’t want to sit down in a restaurant every time they crave their favorite foods.

Pre-pandemic, 61 percent of restaurant traffic came from off-premises dining. During the height of COVID-19, it was 90 percent, according to the National Restaurant Association. While that number has gradually been shifting toward more on-premises dining, it might never go back to those pre-pandemic numbers.

Consulting firm Deloitte predicts that convenient off-premises dining has emerged as a permanent fixture in the restaurant sector. Almost two-thirds (64 percent) of consumers do not plan to return to their pre-pandemic habits of dining in restaurants within the next six months. Currently, 61 percent of consumers order takeout or delivery at least once per week, up from 29 percent one year ago and 18 percent prior to the pandemic.

“Consumer preferences have long been trending towards a desire for greater convenience, as indicated by the growth of online shopping,” Cody says. “This long-term trend, coupled with the pandemic forcing many consumers to become more comfortable using these methods of ordering food, will keep the use of delivery and pick-up elevated, despite a renewed desire to return to eating at physical locations and socializing in person.”

While restaurants have historically contributed to dwell time at retail properties and generated foot traffic for nearby retailers, delivery and takeout lessen the positive impact.

“Is there as much cross shopping if someone just comes in and picks up food? Probably not,” says Daniel Goldware, senior vice president of leasing for Trademark Property Company, which owns 17 mixed-use properties totaling about 10.7 million sq. ft. across the country. “But I would suggest that takeout brings customers to the shopping center more often, which creates a sense of ease and familiarity with that center. Over time, that turns into awareness and eventually loyalty.”

Inflation is hitting consumers from every angle, including gas, groceries and rent. In April, the Consumer Price Index was 8.3 percent higher than last year. Historically, dining out has been the first place where Americans cut spending in an inflationary environment. A recent poll conducted by CNBC|Momentive found that more than half of Americans say higher prices have caused them to cut back on dining out in the last six months.

The restaurant industry should brace for even stronger headwinds, according to a new report, “Skyrocketing Gas Prices: What does this mean for restaurants?” Written by Joe Pawlak, managing principal of consumer research firm Technomic, the report detailed survey responses from 475 consumers across the U.S. who drive gas-powered vehicles.

Though gas prices have been elevated for much of the pandemic, they’ve only recently become particularly problematic for consumers. Russia’s invasion of Ukraine created a major spike in oil prices, driving up gas at the pump to more than $4 per gallon on average nationally, an increase of $1.40 compared to last year.

“Historical experience has shown that a spike in gas prices, especially those that result in $4-

During periods of economic uncertainty, consumers typically cut back on restaurants and other leisure activities. High gas prices are driving the same behavior.

However, food-away-from-home prices are also high, which gives consumers a choice as to where they want to feel the pinch. Experts predict that, all things being equal, consumers will choose the convenience of dining out.

“Prior events and data support Technomic’s view that when consumers feel financially challenged, they don’t typically trade out of foodservice, but rather, they trade down,” Pawlak writes. “Instead of frequenting a higher-end restaurant, a consumer may opt for a less expensive casual dining or fast-casual experience. Or, instead of visiting a sit-down casual-dining restaurant, they move to a QSR.”