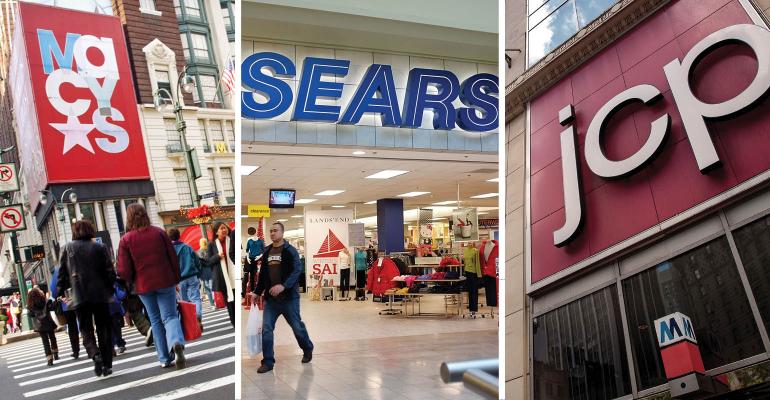 What Department Stores Will Be Left Standing After COVID-19?

The sector was already facing massive challenges. With consumers unlikely to return to malls anytime soon, some chains will disappear.

The U.S. department store sector was in a downward spiral even before the COVID-19 pandemic hit as it faced declining foot traffic and falling sales.

Now the health crisis and its mandated shutdowns and social distancing—not to mention a deep looming recession—may put the final nail in the coffin for some department store retailers.

While some non-essential retailers are beginning to reopen in states easing their stay-at-home orders, experts say the pandemic will accelerate the decline of many department stores and the malls where they’re located.

Department stores will be one of the worst affected sectors of retail as a result of this crisis, notes Neil Saunders, managing director at research firm GlobalData Retail.

“Not only are the products they sell very discretionary, and therefore, being overlooked by consumers focused on essentials, but they also have very high fixed costs thanks to their large stores and extensive inventories,” Saunders says.

On top of this, most department stores entered this downturn in a very weak state, with a combination of high debt, poor sales growth and eroded profitability.

“Most players like Macy’s and J.C. Penney were struggling to get consumers to buy from them during the good times, so grabbing consumer attention during the bad times is incredibly difficult,” Saunders notes. “This is one of the reasons why department stores have been very bad at recouping sales lost from closed stores via their online channels.”

The prospects over the next few months don’t look good either, he adds. Most department store operators have a lot of mall vacations and consumers are likely to shun malls “until the virus is a distant memory. That means that the recovery, while it will come, will be very tepid.”

In essence, this is a lost year for department stores, he says.

Department store closures tend to have a “knockdown” effect on other mall retailers, Tibune said during the webinar. Anchor closures will trigger co-tenancy clauses by many in-line retailers resulting in tenants paying less rent or breaking leases if a mall has multiple anchor vacancies.

Many malls will face multiple anchor vacancies—a tough place to come back from—especially in an environment where demand for space is virtually non-existent, Green Street notes. This poses many questions, including what will happen with vacant anchor space post-COVID-19? Backfilling with any retail could be difficult and most non-retail addition like a hotel, apartment building and office space now “likely doesn’t pencil,” according to Green Street.

What retailers are most at risk?

Sears, which filed for bankruptcy in October 2018 and emerged a year later, has been shuttering stores for years. Today, it makes up only 4 percent of mall anchor space. Some experts say it may not survive the pandemic.

Lord & Taylor will explore liquidating its stores as soon as they reopen, Reuters reported.

“Lord & Taylor has an extraordinary amount of debt,” and the chain was struggling prior to COVID-19, says James Van Horn, a partner at Barnes & Thornburg and a specialist in retail bankruptcy.

“They let their management team go or the team quit, depending upon who you ask,” he says. “They’ve laid off most of their employees and furloughed others. Lord & Taylor is an example of a retailer that didn’t have too many other cards to play,” Van Horn notes, saying it will likely liquidate its inventory.

Van Horn anticipates that other department store retailers might file for Chapter 11 to rid themselves of underperforming stores and ease rent burdens.

From a distressed standpoint, however, most retailers don’t file for bankruptcy unless their lender is forcing them to do so for one reason or another, because it’s so much easier, generally speaking, to do things outside of bankruptcy, Van Horn adds.

So, the question that becomes key for the department store sector is whose lenders are forcing the issue and whose are willing to continue to work with the retailers.

“Right now, everybody is working with each other because there’s nothing to do,” Van Horn says. “It doesn’t benefit a lender to force a going-out-of-business sale and liquidate collateral if nobody is allowed to come and shop.”

Meanwhile, luxury chain Neiman Marcus is nearing bankruptcy. The retailer is close to a deal with lenders that would cut its debt load by more than half in exchange for control of the company. Experts say J.C. Penney could be on the verge of filing as well.

With that restructuring, the question becomes what will those companies look like and how will they emerge to compete in what’s now an unprecedented time in terms of disruption, Boni says. “The disruption will at some time pass, and we’ll have to contend with weaker consumer demand,” she adds.

Green Street reported that a J.C. Penney bankruptcy will probably result in liquidation, saying its business model was broken prior to COVID-19. J.C. Penney stores are primarily located in class-B and C-malls.

Kohls, for example, has focused on off-mall locations, has a lower price point than its competitors and is better positioned in a recessionary environment, Wyeth says.

“Off-mall based retailers will have some automatic advantage in early days to the extent that customers can get in out of the store,” Boni adds.

That said, department stores all have significant online businesses, Boni notes. “The increased penetration of online will continue to accelerate, we believe, over time.”

Nordstrom, meanwhile, has fewer stores than many other chains. The retailer has a good offering in terms of merchandising and a strong e-commerce presence, Wyeth notes. It also has some unique characteristics that should support it through tough times.

But that said, Kohl’s and Nordstrom are department stores and to the extent that social distancing lingers, even when things do reopen, it’s going to be harder for department store retailers to operate, Wyeth adds.

“It’s going to be harder to justify their existence really over the longer term. There’s a lot of risk generally in the sector.”

Meanwhile, Macy’s  held on to an investment-grade rating up until February, and then S&P downgraded it from BBB- to BB+, amid doubts surrounding its turnaround plan. (The Macy’s rating has since been lowered to B+).

“They don’t have a good hook or special niche within the department store sector,” Wyeth says. “They’re not high end. They’re not discount and they’re just way overstored. They’re largely mall-based and some of the malls that they’re in are not A malls. They’re in B malls—malls that are already struggling.”

In February, Macy’s announced it would close 125 stores in a restructuring plan.

“Macy’s was already taking a hard look at their store print and we expect others to do so as well,” Boni says. “That will have to factor in what’s the right footprint, given the potential lower levels of demand.”

Will shoppers return to malls?

As more restrictions are lifted, will consumers feel comfortable and safe returning to malls? Will they shop under restrictions?

“Some consumers may see a bunch of restrictions—whether mandated by the government or not—that in order to do some shopping at a department store, ‘I’ve got to book a reservation. I’ve got to wait in line probably even with a reservation. I have to take my temperature and wear a mask,’” Van Horn notes.

“For some consumers, it might be ‘No, thanks. It’s too much hassle.’”

Others might just as easily say these precautions make them feel comfortable, he adds. Meanwhile, there are many consumers in the middle.

“It’s going to be the Wild West on consumer behavior coming out of this,” Van Horn notes.

Yet despite the uncertainty, some malls are already reopening. In early May, giant landlord Simon Property Group reopened 49 malls in 10 states.