/sites/all/themes/penton_subtheme_wealthmanagement/images/logos/footer.png
Recent
Recent
Hybrid Work Was Supposed to Create the Best of Two Worlds. It’s Turning Out to be a Challenge for Office Tenants.
May 25, 2022
Eight Must Reads for the CRE Industry Today (May 26, 2022)
May 25, 2022
Cresset and Meristem Merge to Create $27B AUM Multifamily Office
May 25, 2022
Know the Rules: State Residency and Taxation for Individuals, Trusts, and Estates
May 25, 2022
Featured
The 10 Best and 10 Worst States in Which to Retire in 2021
Jul 15, 2021
Poll: 15 Classic Books on Investing and the Markets
Apr 03, 2020
Fifteen Must-Listen Business Podcasts for Advisors
Aug 14, 2020
Celebrity Estates: Jay Leno and Planning for Classic Car Collections
Feb 22, 2022 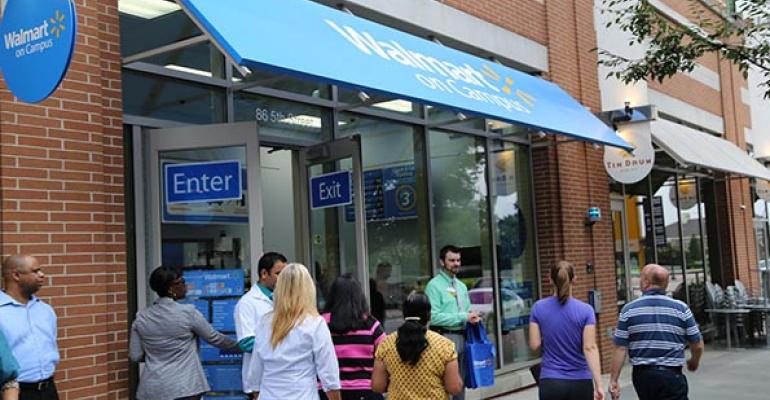 Walmart is expanding its university-focused store concept. The discounter recently opened a fifth Walmart on Campus store, this one at Virginia Commonwealth University (VCU) in Richmond.

Bentonville, Ark.-based Walmart is one of only a handful of national retailers with stores on college campuses. The demand is there, but there are unique challenges related to serving students and operating on campus, says Dusty Batsell, director of asset management – retail for American Campus Communities.

“I’ve always thought Walmart’s on-campus stores were a very smart idea,” Batsell says. “It’s a way for Walmart to add to their store count without taking on the development risk and expense.”

Walmart spokesperson John Forrest Ales says the chain’s on-campus stores are another way of meeting the needs of its customers. “We’re always looking at new ways to take care of our customers,” he adds.

Walmart on Campus stores range from 2,000 to 6,000 sq. ft., according to Ales. The stores feature a pharmacy and offer groceries and general merchandise, including an assortment of fresh produce, dairy and meats, dry goods, consumables, health and beauty aids, over-the-counter medicines and merchandise tailored to the college students, faculty and staff.

In addition, Walmart on Campus stores offer free pickup for Walmart.com purchases. Ales says the chain wants to make it easy to shop at Walmart, and integrating online and physical retail offers a higher level of convenience to its customers.

The merchandise at Walmart on Campus is tailored to each location. Batsell has noted that Walmart is very deliberate with its merchandising since space is at a premium. “They’ve done a good job figuring out what SKUs are moving,” he notes.

Historically, retail on college campuses was limited to bookstores or the occasional convenience store. “There was a limited selection, and usually you had to go off campus to find what you need,” Batsell notes.

But all that is changing as forward-thinking universities partner with developers like American Campus to bring retail to their campuses. “Today’s students are sophisticated consumers,” Batsell says. “Universities are competing for students, and in order to attract them, they have to find a way to meet the needs of these students.”

Batsell points to American Campus’s mixed-use development at Drexel University in Philadelphia as an example of colleges embracing retail. The REIT included 45,000 sq. ft. of retail in three student housing buildings, and the tenant mix is heavily focused on food and services. Tenants include Shake Shack and Joe Coffee, along with two local restaurant concepts and a yogurt shop.

“Retail on campus means that students don’t have to get in their cars to get what they need,” Batsell points out. “They can walk to the shops and restaurants, and that concept of walkabilty has really taken hold.”