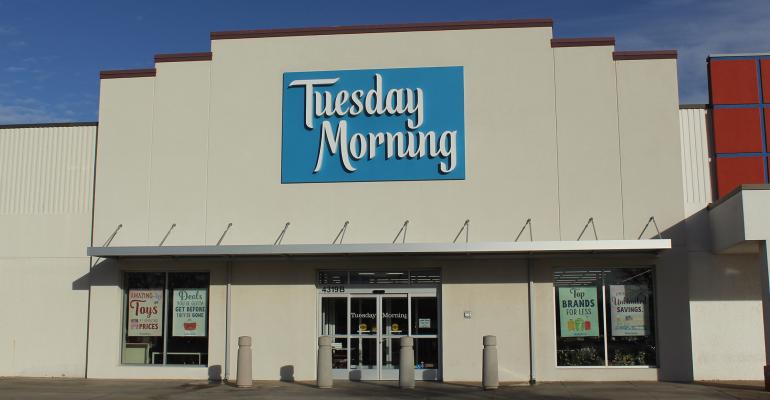 The company plans to close about a third of its 687 stores.

(Bloomberg)—Tuesday Morning Corp. filed for bankruptcy, adding the discount home-goods chain to the list of retailers felled by pandemic shutdowns.

The company plans to close about one-third of its 687 stores and reduce its liabilities during the restructuring, according to a company statement sent to Bloomberg. The retailer filed the Chapter 11 case in U.S. Bankruptcy Court in Dallas. It’s aiming to emerge in early fall with a reduced store count of around 450.

Retailers, many already struggling with competition from online shopping, have been among the hardest hit by Covid-19. Lockdowns drained revenue, helping to tip companies including J.C. Penney & Co., J. Crew Group Inc. and Neiman Marcus Group Inc. into bankruptcy court.

To remain in business during the court proceedings, Tuesday Morning lined up an initial $100 million in the form of a so-called debtor-in-possession loan from existing lenders, it said in the statement. The agreement requires the retailer to obtain a commitment for an additional $25 million, which is still under negotiation, the company said.

Tuesday Morning had to temporarily shut its stores in response to the pandemic, triggering a default on its loan agreements, according to a regulatory filing. Its lenders, which include JPMorgan Chase & Co., Bank of America Corp. and Wells Fargo & Co., agreed on May 14 to postpone taking action until May 26.

Founded in 1974, Tuesday Morning is a national off-price retailer that specializes in home goods, textiles, furnishings and related products. It employed about 9,600 people at the end of its 2019 fiscal year, and had almost 700 stores in 39 states, according to a filing in March.

Plans call for store closures in two phases. Tuesday Morning will ask for court permission to close at least 132 under-performing locations in the first phase in addition to its distribution center in Phoenix. As it seeks to renegotiate rent with landlords on remaining stores, it plans to identify another 100 outlets to shutter, the company said.

Bloomberg reported on May 6 that the Dallas-based company was considering a Chapter 11 filing.

The chain was especially vulnerable because it has no online channel; all of its sales come at its stores. Tuesday Morning drew $55 million from its revolving credit facility earlier this year to help it ride out the pandemic.

Even before the closures, Tuesday Morning was experiencing strains. Sales at outlets open for at least a year fell 3% during the quarter ended Dec. 31, filings show, with cash and equivalents dwindling to just $4.9 million.

The company started reopening stores last month and saw a bump in sales. Since the reopenings began April 24, comparable store sales for those back in business were around 10% higher than the same period a year earlier, the company said in the statement.

More than 80% of the chain’s stores are operating on limited hours under local and state guidelines. Roughly 7,300 employees have returned to work after previously being furloughed, Tuesday Morning said.

Haynes & Boone LLP is working as the company’s legal adviser, Miller Buckfire is acting as financial adviser and AlixPartners LLP is its restructuring adviser.

The case is Tuesday Morning Corporation, 20-31476, U.S. Bankruptcy Court for the Northern District of Texas (Dallas).

--With assistance from Fabian Graber and Boris Korby.