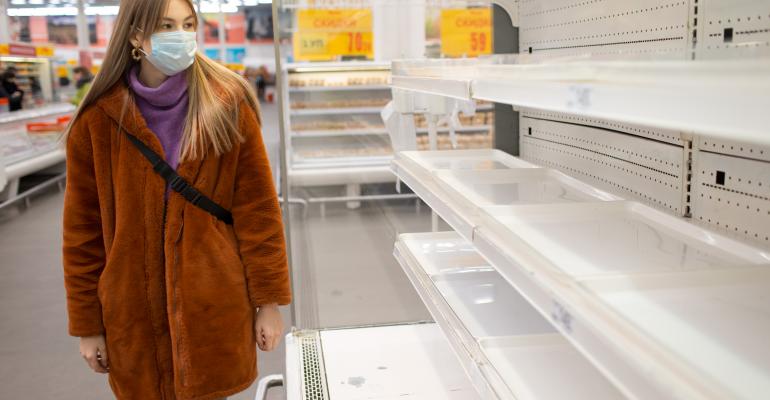 The White House’s call for traveling New Yorkers to self-quarantine has spooked and confused some drivers.

Some truckers are refusing to carry orders into the city and surrounding suburbs like New Rochelle that have been hard hit by the coronavirus, even as demand for groceries is double or triple normal levels as shoppers stockpile soup and other everyday goods.

There is no evidence that food is growing scarce in the city. But one index, which measures loads of all types of goods destined for Brooklyn that were rejected by shippers, has tripled compared with the same time last year, reflecting carriers’ inability or unwillingness to haul loads into the epicenter of the outbreak.

The White House’s call for all those leaving New York City to self-quarantine for 14 days has spooked and confused some drivers, according to people monitoring shipments, while delivery curfews and requests to register “essential employees” have created additional friction. Some warehouse operators are even insisting on taking truck drivers’ temperatures as they pull into depots.

“Closing the gap between demand and supply is mostly a matter of trucks and distance,” said Phil Palin, a supply-chain resiliency expert who’s currently advising grocers. “Distance has been reduced by the evaporation of traffic congestion. But -- and this is a big but -- truck driver fears of contagion and confusion over government health guidance threaten the volume and velocity of grocery distribution.”

A March 25 report from the Supply Chain Analysis Network, a state of the industry report compiled by experts in the field, noted a “particular concern related to the grocery supply chain serving the City of New York.” While the report said “the grocery supply chain should be able to sustain and enhance flows,” it found that truckers “have been much more likely to reject offers to deliver” to the New York metropolitan area.

To be sure, truckers could reject loads bound for New York not out of fear but simply because they got a better paying job elsewhere, and freight rates have increased with demand spiking. Also, Manhattan’s tight confines and myriad parking regulations mean that the city is never an easy place to get into and out of for a truck, compared with a spacious Walmart parking lot.

“As with any crisis, there are naturally going to be logistical challenges in getting needed supplies to their destinations,” said Sean McNally, a spokesman for the American Trucking Associations. “We are hearing sporadic reports that drivers would rather not go to New York, but this was true before the pandemic struck.”

Still, grocers and wholesalers who operate in the Big Apple don’t need any additional headaches right now. Morty Sloan, chief executive officer of Morton Williams, which has 14 supermarkets in Manhattan, said its supplier, Wakefern Food Corp., is “getting us trucks when they can.”

“A truck that would normally come Tuesday, might come Wednesday or Thursday,” said Sloan, who buys from hundreds of other food suppliers in addition to Wakefern. “It may come at night instead of the morning. In other words, they are doing the best they can.” Wakefern didn’t immediately respond to a request for comment.

Meanwhile, big grocery wholesalers are boosting capacity and borrowing from others. Mike Duffy, Chief Executive Officer of C&S Wholesale Grocers Inc., which supplies groceries to Target Corp. and Stop & Shop, has brought on employees from fellow wholesaler US Foods Holding Corp., which typically serves thousands of restaurants that are now closed.

Duffy said he’s not had a problem getting food to New York, but has heard that some truckers are remaining inside their rigs during deliveries or simply dropping goods off at the curb.

--With assistance from Thomas Black.

To contact the reporter on this story: Matthew Boyle in New York at [email protected].

To contact the editors responsible for this story: Crayton Harrison at [email protected]