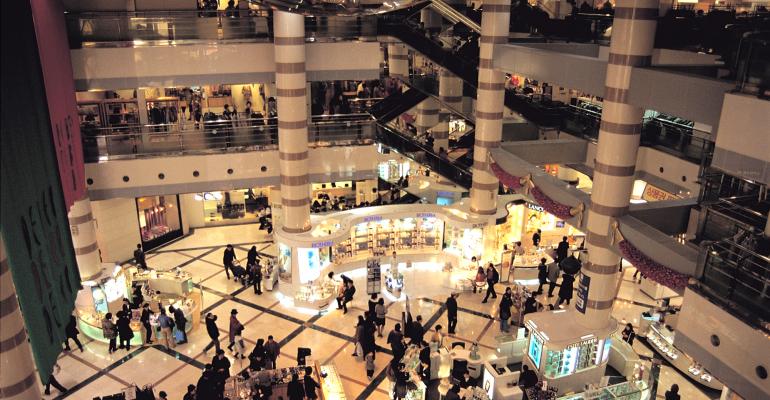 While the retail sector continues to face challenges, REITs that own top-tier malls are posting solid performance numbers and respectable earnings.

Despite record numbers of retail bankruptcies and store closures over the last couple of years, several big mall REITs, including Simon Property Group, Macerich and Taubman Centers, reported increased store sales and occupancies in third quarter, solid measures of how their properties are performing.

REITs generally own malls in areas that are wealthier and have higher population density, according to NAREIT. That means there are more potential shoppers with more money to spend in the areas around REIT-owned malls, says Calvin Schnure, NAREIT’s senior vice president of research and economic analysis.

“This is really important when you’re dealing with the disruptions from e-commerce and bankruptcies and store closures, because the REITs have an easier time refilling the space,” Schnure says.

And that’s net positive for the REITs going forward, he notes, because many of the new tenants signing leases for spaces vacated by retailers like Sears and Bon-Ton are paying more.

“They’re paying higher rates because these are fresh stores coming in with a new product,” he says.

“There’s certainly pain being experienced by traditional brick-and-mortar retailers, but the investment-grade REITs we cover tend to have stronger balance sheets,” he says. In addition, “they have strong relationships with strong retailers… that can offer something not available by mouse click or tap. And third, their locations have good population density and tend to be relatively more affluent.”

Wimmer says this gives REITS not only the flexibility to position their portfolios in a way that helps insulate them from e-commerce competition, but they also have properties that healthy retailers want to be in.

Still a case of the ‘haves’ and ‘have-nots’

A bifurcation between top-tier and lower-tier mall REITs continues. “The higher the quality of the mall, the more resilient we expect them to be,” says Ana Lai, senior director and analytical manager at S&P Global Ratings.

Many mall REITs reported third-quarter earnings over the past month. For the most part, much of these companies’ results were positive. Industry analysts say REITs like Macerich and Simon, which boast some of the nation’s top-performing malls, will have little problem weathering the so-called “retail apocalypse.”

However, REITS like CBL Properties and Washington Prime Group, which operate some class-B malls, are struggling, especially when faced with department store closings.

S&P rates Washington Prime “triple B-minus with a negative outlook (BBB-/Negative),” which is at the very low end of investment-grade. Lai says the company’s same-store NOI growth is under pressure primarily due to the ongoing challenges in the retail space.

S&P rates CBL a “double-B rating, with a negative outlook (BB/Negative),” which Lai says is at the low end of the spectrum, so it’s speculative-grade. She says S&P expected negative same-store NOI growth, mainly due to pressure from low rent growth following tenant bankruptcies and store closures.

An ongoing challenge that S&P sees for 'B’-rated malls is that Sears’ bankruptcy will require these companies to take on a substantial amount of capital expenditures to redevelop and reposition those boxes.

How quickly these companies can redirect their resources and capital to focus on these vacant spaces will determine their success in minimizing disruption to their properties. Bon-Ton stores were more common in 'B’-rated malls, which makes the Sears bankruptcy a bigger issue for REITs that have exposure to both retailers.

“The capital required at some of these Sears stores that will be vacated could put pressure on the balance sheet,” Lai says.

Simon, Macerich and Taubman have been backfilling vacant stores with more restaurants, pop-up stores and “experiential” and service-oriented tenants like gyms, theaters and co-working spaces to drive traffic.

Several REITs, including Simon and Taubman, are also undertaking redevelopments of top-tier malls to create mixed-use properties. Many REITs are also adding clicks-to-bricks retailers  like Warby Parker, Bonobos and Fabletics to their tenant mix.

“Clearly, the ‘A’ mall REITs have been in a better spot than the ‘B’ mall REITs,” says Alexander Goldfarb, a senior analyst at Sandler O'Neill + Partners LP. “That said, it’s not like they’ve been immune, in the sense that you still need to be able to present investors with a growth profile.”

“In mall land, you have to keep spending money,” he says. “If you’re always current and you’re spending, then you’re going to be fine. It’s definitely an incremental investment. But if you wait a long time, suddenly, you’ve got to put a lot of money in just to catch back up before you can move it ahead. That’s the biggest issue for the malls.”

Simon, the largest U.S. mall owner, announced third-quarter earnings that included a 10 percent increase in funds from operations (FFO) to $3.173 billion year-over-year. Sales per sq. ft. for the portfolio increased 4.5 percent year-over-year to $650. Occupancy ticked up to 95.5 percent. Total portfolio NOI growth for the past nine months was 4.1 percent.

Simon has one of the highest credit ratings in the REIT space, at A.

“We have no concerns about Simon at all,” Lai says. “Their rating has stayed at the same level for many years. The performance that they’ve posted so far, including third quarter, has been pretty solid.”

“We’re putting Sears in our rearview mirror,” Simon said. “We’re planning for the ultimate, unfortunate demise of Sears and we're ready for it, and we have the balance sheet and the capital with intellectual and human resources to deal with these set of events.”

Simon will invest more than $1 billion to redevelop the Sears stores across its properties. Simon pointed to redevelopments including the Brea Mall in California, Northgate Mall in Seattle and Phipps Plaza in Atlanta—all of which lost Sears stores.

Macerich is an upscale retail REIT boasting 48 centers, many on the East and West Coasts. Sales per sq. ft. for the portfolio increased by 7.3 percent to $707, according to its third-quarter earnings report.

Like Simon, Macerich is devising creative ways to fill vacancies, including teaming up with co-working company Industrious to open shared-office spaces at its properties. It also announced a joint venture with Simon to co-develop Los Angeles Premium Outlets.

Taubman’s FFO was up 36.4 percent, and excluding lease cancellation income, same-center NOI growth was up 9.2 percent in the third quarter. Sales per sq. ft. increased 5.8 percent for the quarter—the ninth consecutive quarter of positive sales growth.

“We recently upgraded them ahead of third-quarter earnings on the view that the NOI would improve and it has,” Goldfarb says. “Speaking to management, there’s a lot of upside potential in their NOI profile for next year.”

He says the earnings in their malls are improving, and most importantly, their developments in Puerto Rico, Hawaii and Los Angeles are all coming back on line or improving.

For example, in Puerto Rico, the Mall of San Juan continued its strong post-hurricane ramp-up. Year-to-date, sales per sq. ft. are up nearly 30 percent. Taubman also revealed the $500 million “reimagination” of Beverly Center in Los Angeles.

Meanwhile, consolidation in the sector continues. Following Brookfield Property Partners’ acquisition of GGP, Brookfield said in its earnings call that it plans to convert at least 100 GGP malls into “mini cities.” It will spend as much as $1 billion annually for the next few years to reposition these centers by adding hotels, offices and housing.