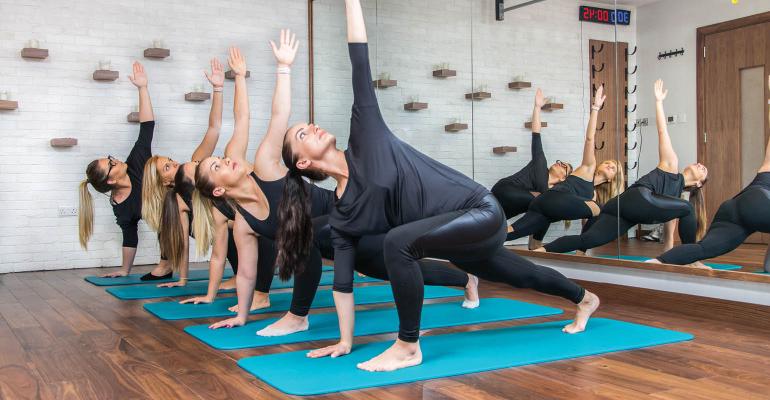 Millennials are driving fitness, beauty and wellness concepts, many of which operate on membership models and drive regular shopper traffic.

Neighborhood strip centers are getting a big boost from the booming “self-care” sector, which focuses on wellness, health, fitness and beauty.

Globally, the self-care sector is a whopping $4.7 trillion business, reports the Global Wellness Institute.  The term “self-care” is about people investing more in their health, says Sara Martin, vice president of retail brokerage at Welsh Cos./Colliers International | Minneapolis-St. Paul. That could be physically, mentally, spiritually or socially.

“Self-care has recently emerged in popular culture... and the idea has caught on like wildfire in social media and in the self-help categories,” according to a new report from Colliers International | Minneapolis-St. Paul.

And this trend is cutting across many sectors, including retail real estate. For example, there’s been an uptick in new leases signed by beauty, health and fitness retailers, many of which are going into neighborhood shopping centers. They’re filling small and mid-size vacancies in both suburban and urban markets.

Membership-based concepts are taking off

The Colliers report states that because the self-care trend allows individuals to create a “personalized menu” of what “care” means to them, new concepts continue to emerged, while many existing ones are expanding.

For example, someone’s self-care routine might include spin class twice a week, a yoga or barre class on the weekend, a massage and lash extensions once a month, plus a bi-weekly manicure.

Many of these fitness concepts and service providers offer monthly membership packages with access or services at a reduced rate. While consumers save money on the packages, these businesses—many of which are franchises—essentially know that they can count on this monthly revenue.

“When these retailers are business planning, and they’re going to focus around a membership model, it gives them a very specific number that they have to hit,” Martin says. “If you own a massage therapy [business] and aren’t going to do a membership model, you have no idea if the lady who just walked out your door is ever going to come back. But if she’s on a membership, you do.”

“You’re feeling more stable and your business plan and financial projections are stronger when you have a membership-based system, because there’s not so much month-to-month variance,” she says.

They essentially have the consumer “on retainer,” she says, adding that this membership pricing structure is a big driver in the surge of new concepts and the expansion of existing specialty service providers.

“These franchisors have really fined-tuned these models,” she adds. “They understand how to market, and in the age of social media, you can buy $300 worth of Facebook ads and get 20 prospective members. You used to have to direct call and direct mail.”

Most of these concepts are franchise-based and a typical franchisee agreement lasts 10 years, so the vast majority are signing 10-year deals with two five-year options, according to Martin.

“You don’t want your lease to run out before your franchise agreement, because otherwise, there’s the stress and expense of another buildout,” she says. “And you can usually get more tenant improvements and a better deal from a landlord with a 10-year term than a five-year term.”

The continuing expansion of wellness brands is popular with many landlords, because once their client base is established, these users bring in foot traffic to their centers on a regular basis and they’re relatively protected from e-commerce competition.

“From the landlord’s side, you really don’t get into the operations of the tenant’s business, but you understand that the contractual arrangements that they make with customers are very important, and that’s why many of the operations have pre-sales while they’re under construction to build their monthly revenue stream before they open,” says Alan Zell, president and CEO of Phoenix-based retail property management and leasing firm ZELL Commercial Real Estate Services.

In addition, landlords are often willing to give these types of tenants reduced rental rates in the earlier months of operation, or even rent abatement, until they can build up enough repeat revenue, Zell notes. “Because if they do get the business going and have all of those members, the likelihood of long-term success is very strong.”

Fitness category pumps up its presence

“Fitness continues to grow and change,” says Stefanie Meyer, senior vice president and principal at Mid-America Real Estate—Minnesota, LLC. “Fitness has introduced options like Gympass and ClassPass, where you can go to many different specialty fitness locations for one price per month. Others have done memberships, or the more you go, the cheaper it becomes. They’re getting creative.”

Some people prefer smaller, more intimate specialty workout studios instead of the country club feel of a Life Time gym, Meyer adds. Some like Planet Fitness, because its monthly membership is cheap enough that they don’t feel obligated to go all the time, she adds. There are many models out there.

Is oversaturation in the fitness space a concern?

“It definitely will become oversaturated at some point,” Martin says.

However, it depends on the neighborhood and how far someone is willing to travel. Colliers is finding concepts like SoulCycle and CycleBar are performing better in more urban environments, for example. It’s more difficult to find big-box health club space in urban areas, so the “small fitness guys do better with that density,” Martin notes.

Also, some of the lower-priced, full-service gyms could take business away from pricier specialty studios if they offer similar classes.

“Any successful business type becomes a trend and then it grows until such a point that it becomes oversaturated or the strong shall survive,” he says. “You have to be diligent to a degree from a landlord’s perspective, because if you want to open up a Pilates studio in your shopping center, and there are two other pilates studios within a half mile, if yours is an independent rather than a franchise or chain, you better be sure that this person has something special; that she’s moving customers there, because there are only so many people who do pilates.”

Specialty beauty concepts are also popping up at strip centers, including waxing centers, nail salons, blow-dry bars and lash extension studios. Many offer membership pricing for a certain number of services or visits per month.

“Eyelashes, nails, tanning, waxing, hair, massage and specialty clinics continue to grow,” Meyer says. “It seems like millennials are willing to pay for services more than the previous generation.”

Even some doctors and dentists are embracing membership fees, Martin says.

Due to the success that many of these concepts are having with their membership pricing structures and well-located assets, they’re creating spin-offs or expanding into new markets. These users typically occupy between 1,500 sq. ft. to 4,000 sq. ft. across all concepts.

Millennials are behind trend

Much of the wellness trend is being fueled by millennials. A study by the consulting firm Harris Group found that 72 percent of millennials prefer to spend money on experiences rather than on material things.

“I think millennials are driving it a ton,” Martin says. “It all centers around health, wellness and appearance.”

Some baby boomers are engaging in health and wellness trends as well. Physical therapy and massage, for example, are beneficial for aging.

Although Martin says she’s seen a lot of trends take on throughout her career, “self-care is way bigger than the burger trend, the pizza trend or other trends.”

“This one is more comprehensive because there are so many different concepts and they fall across a bigger spectrum,” she notes. “Some are going to work and some aren’t. But in the end, it’s positive. They’re backfilling space, and we’re seeing low vacancy rates, in general.”