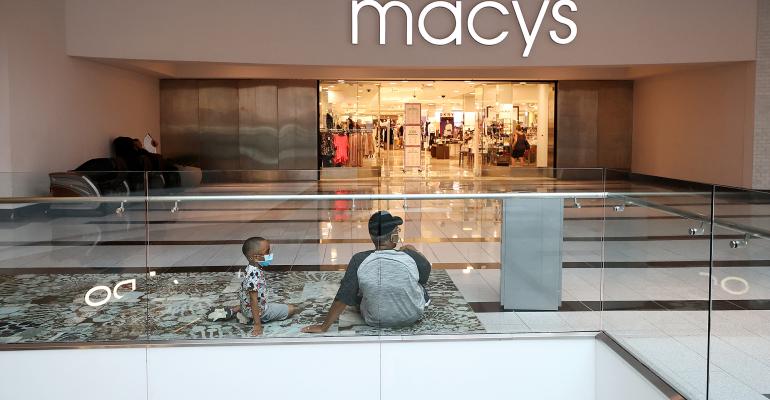 The pandemic has accelerated what some see as a long overdue culling of locations.

(Bloomberg) -- Quintessential mall stores from Macy’s Inc. to Kay Jewelers to Gap Inc. are plotting out a post-Covid future -- and traditional shopping centers won’t play as much of a role in it.

Signet Jewelers Ltd., which owns chains such as Kay and Zales, said this past week it will expand in off-mall locations while continuing to pull back from the old-school gallerias where it has long had a major presence. The company also plans to add more kiosks in underserved markets.

The move brings “an opportunity for a better economic model,” Joan Hilson, Signet’s chief financial officer, said in an interview. “The foot traffic for off-mall locations is better than what we’re seeing in the mall, certainly in this time. It’s really important, and we see that shift continuing.”

Retailers are abandoning enclosed malls in growing numbers as the rise of online shopping transforms the industry -- a trend that has accelerated during the coronavirus pandemic. Almost a third of retail CFOs are planning to scale back their mall presence, according to a recent survey from consulting firm BDO USA.

That’s throwing into question the future of hundreds of traditional malls, already financially struggling before the pandemic, as they grapple with expensive real estate and fewer tenants who want to be there.

“Even the ones that haven’t been distressed are being hurt by the lack of foot traffic in the mall,” said David Berliner, head of the restructuring and turnaround practice at BDO. Some are talking about relocating stores from malls to nearby centers anchored by merchants like Walmart Inc. “because they’re going to get more foot traffic than they’re getting at the mall now.”

Signet exemplifies that kind of shift. The company closed 395 stores last year, mostly in malls, and plans to shutter another 100 this year. At the same time, it has shifted 33 mall stores to off-mall locations. Some of its outlet stores, primarily Zales locations, are now in so-called lifestyle centers -- open-air markets with dining and other activities -- and in locations next to popular stores like Ross Dress for Less. Signet’s Kay bridal business, in particular, is doing better in off-mall locations than the enclosed shopping centers.

Similarly, Gap said in October that it’s pulling back from malls, where its brands have long been staples, due to high rent and weaker performance. The company, which owns Banana Republic and Old Navy in addition to its namesake chain, wants 80% of its stores to be outside of enclosed centers by 2023.

For retailers, there are many advantages to leaving the old-school shopping centers. Rent can be “substantially” lower elsewhere, the hours of operation are more flexible, customer parking is easier and building costs are lower, said Ivan Friedman, chief executive officer of RCS Real Estate Advisors.

Bath & Body Works also cited “significantly higher conversion rates” -- a reference to the proportion of shoppers who make a purchase -- in a recent earnings call. Same-store sales, a key metric, were about twice as high in its off-mall locations last year, it said.

The pandemic has accelerated what some see as a long overdue culling of locations.

“Everybody felt before Covid that they had 20% too many brick-and-mortar stores,” Friedman said.

That’s hurting malls disproportionately. Occupancy rates in the third quarter were about 87% at malls -- meaning roughly one in every eight storefronts was empty -- compared with about 92% at off-mall locations, according to a report from real estate data firm Green Street. Landlords in 2020 also collected a higher proportion of rents from tenants at off-mall centers, suggesting their better financial health.

Foot traffic at malls is down about 30% from a year ago, worse than the slide at strip centers, according to Green Street.

Enclosed malls have already seen a pullback in specialty shops like record and card stores, making them overly concentrated in apparel, a category that has struggled during the pandemic. As Friedman put it, “How many different shoe stores can you go to?”

That feeling of sameness is driving shoppers instead to a newer generation of open-air centers that include housing or office space, BDO’s Berliner said.

“A lot of these mixed-use centers now are trying to recapture that town hall feel,” he said. “That’s where people want to go again, instead of just these rectangular indoor boxes, where everything is the same.”