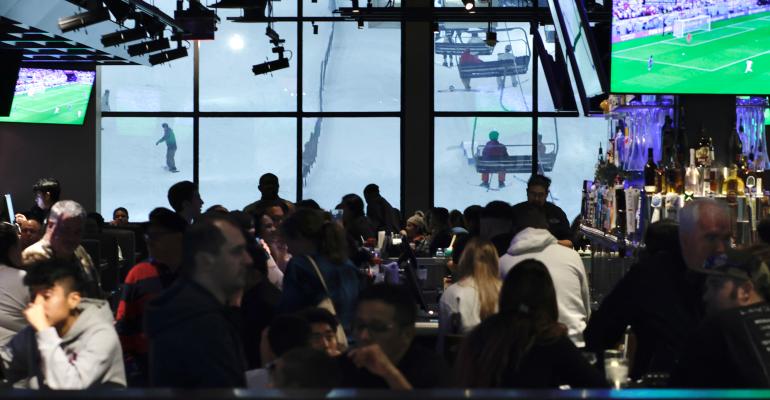 Skiing at Your Neighborhood Mall?

The problem is that these elaborate venues require expensive upfront investments and, like any new concept, can be risky.

(Bloomberg Opinion) -- Mall owners think they have a sure-fire way of turning around their beleaguered shopping malls: Do away with the shopping. To fill increasingly empty space vacated by retailers, they are adding things like ax-throwing bars, golf simulation venues, high-end yoga studios and even mini casinos. Developers have dubbed this trend ``experiential retail,’’ which is a fancy way of saying these costly, seemingly last-ditch investments will likely prove to be too little, too late to reverse struggling malls’ descent into obsolescence.

The business case for experiential retail certainly sounds compelling. New tenants such as the tech-driven mini golf company Puttshack and indoor cycling businesses like Xponential Fitness Inc.’s CycleBar have been driving a lift in traffic to stale traditional malls. CBL & Associates Properties, a Tennessee-based real estate developer, replaced an empty Sears department store at Galleria Mall in York, Pennsylvania, with an 80,000 square foot Hollywood Casino by Penn Entertainment Inc. Within weeks of the casino opening in August 2021, traffic to the mall increased 31% and the positive growth trend continued through July 2022, according to retail location analytics firm Placer.ai. The Pierre Bossier Mall in Bossier City, Louisiana, opened a child-friendly indoor theme park by Surge Entertainment in April. The park helped lift the median time people spend in the mall above 75 minutes for the four months after it opened from 51 to 58 minutes between July 2021 and March 2022, according to Placer.ai.

But these moves feel more like slapping a band-aid on a gaping wound. The retail real estate industry is still dealing with the overbuilding that occurred in the 1980s and 1990s, before the internet permanently changed shopping habits. Coresight Research estimates that 25% of the nation's almost 1,200 malls will close by 2025.

Investors certainly aren't impressed. The Bloomberg REIT Regional Mall Index is down 54% since July 2016, compared with a modest drop of 1.1% for all types of REITs and a gain of 83% for the S&P 500 Index. The Pierre Bossier mall sold at a loss last year to new owner Kohan Retail Investment Group. The property may have plenty of company. Bloomberg Intelligence's real estate analysts wrote in a report this month that ``buyers are scarce’’ for mall properties "given the uncertainty of cash flow and rent growth.’’ 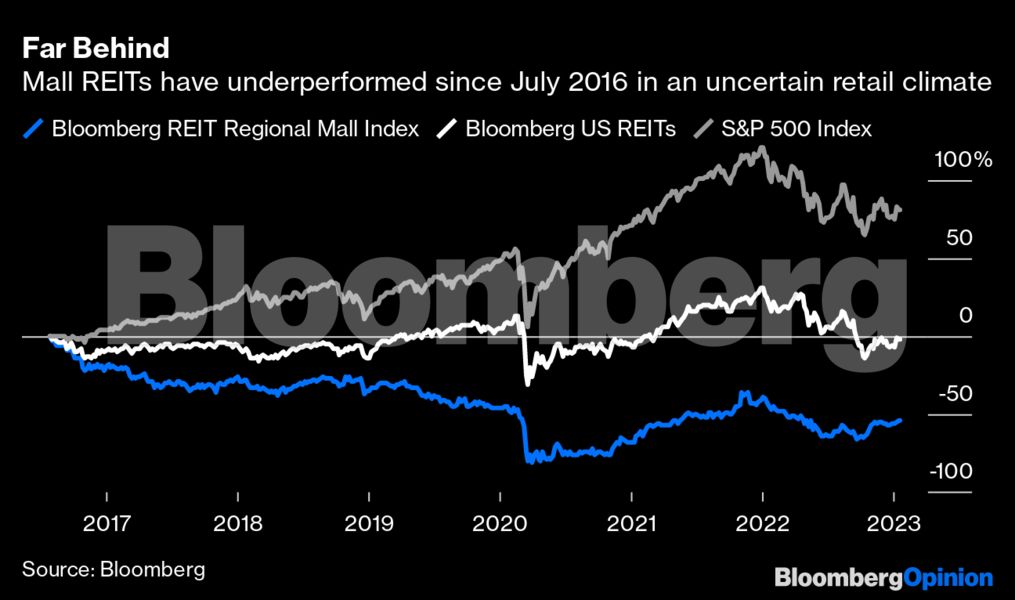 The problem is that these elaborate venues require expensive upfront investments and, like any new concept, can be risky. The cost of bringing in a trampoline park, for example, can be at least twice that of a more run-of-the-mill storefront, said Daniel Taub, national director of Marcus & Millichap's retail and net lease division. And it could quickly multiply with something like the American Dream mall’s indoor ski slope. It can take more than seven years to see any returns on unproven new concepts, says Paul Chase, executive vice president of retail leasing with real estate advisory Jones Lang Lasalle Inc.

In many cases, the mall takes on much of the cost of renovating an empty department store for a new children’s interactive playground or an indoor pickleball court. Many of these family activity and entertainment companies don’t have the capital to pull off big renovations up front. Landlords can structure lease agreements to protect themselves such as charging higher rent up front to recoup their investment quicker, or increasing rent later when the tenant shows higher profits. It’s a toss up whether the investment will pay off.

Mall developers argue that switching up tenants from an endless row of shoe and apparel companies to places that might also pamper nail salon clients with wine or champagne meets the post-pandemic need for community and also helps generate off-peak traffic. Before, malls mainly counted on busy Saturdays and Sundays for shoppers. But with a mix of places to go to, people may stroll in on a Tuesday morning for a fitness class or a Thursday evening for a game of mini-golf with friends.

However, this “new” experiment isn’t exactly new.  Discovery Zone and Chuck E. Cheese became major tenants during the 1980s and 1990s until the companies went into bankruptcy and closed stores. More recently, mall giants have tried building large water slides and roller coasters to rally new customers. But many of these concepts quickly lose their luster and fickle shoppers point their interests elsewhere.

Compounding the problem for malls is that investment-grade retailers such as TJX Cos have stayed away from indoor shopping centers and traditional anchor tenants like Macy’s Inc. are finding more success as smaller off-mall stores. Also, because of “co-tenancy” clauses, which allow shops to reduce rent if key tenants leave or if the mall reaches a certain vacancy level, sometimes dropping an experiential retailer in an empty space — while expensive and risky — means landlords avoid losing additional rent.

While swapping a trampoline park for a defunct department store might seem promising, it’s a risky game. The reality is that mall traffic is waning, and several shopping centers have found more success turning empty boxes into e-commerce distribution sites or urgent care centers. For many struggling properties, returning to a time when the local mall was a social and cultural icon (who can forget when Marty McFly time travels in a mall parking lot in Back to the Future?)  is a pipe dream. Mall developers and investors might have a better chance of keeping their properties afloat by taking a more skeptical approach to shiny new trends and consider instead that we simply don’t need so many places to shop.

To contact the author of this story:
Leticia Miranda at [email protected]