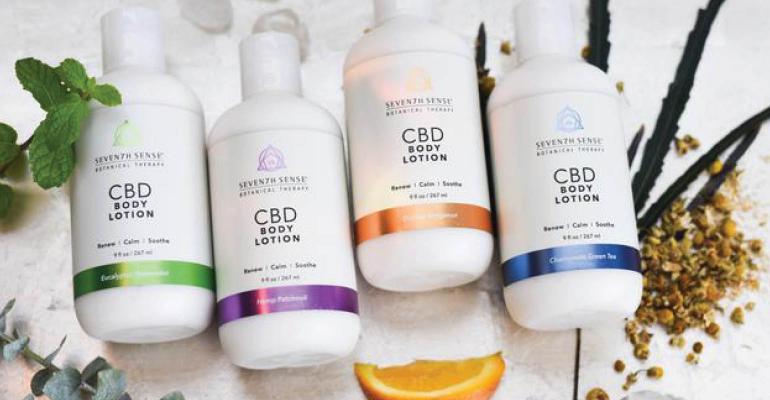 The kiosks’ novelty might serve as an added attraction for shoppers, while short-term kiosk leases are low risk.

Simon Property Group is introducing a new line-up of mall kiosks, which many might agree is not your “typical” mall retailer—at least not yet.

Indianapolis-based Simon, the biggest mall operator in the U.S., has inked a deal to open 108 kiosk locations that will sell beauty and personal care products infused with cannabidiol, or CBD, a chemical produced by the cannabis plant.

Simon is partnering with Columbus, Ohio-based cannabis company Green Growth Brands (GGB) to launch the kiosks operating under GGB’s Seventh Sense Botanical Therapy brand. The products offered will be purely for topical use; the kiosks won’t sell products like vape pens or edibles.

The passage of the 2018 Farm Bill in December led to an explosion in CBD products, which are quickly going mainstream in the health and wellness industry. Advocates say CBD has the calming effects of marijuana without the high that comes from THC, and they tout that CBD can help with everything from treating chronic pain to reducing anxiety.

The first Seventh Sense kiosk will open this month at Simon’s Castleton Square Mall in Indianapolis. The remaining kiosks will open throughout 2019 and will include locations at Roosevelt Field Mall in New York and The Galleria in Houston.

"CBD-infused products are an emerging growth category and we're constantly on the lookout for new products that resonate with our shoppers. As such, we're excited to welcome Green Growth Brands to 108 Simon locations,” said John Rulli, president of Simon Malls, in a statement provided to NREI.

The CBD market is expected to see a continued growth boom. According to a 2018 report by cannabis market research firm Brightfield Group, the market for hemp-derived CBD could hit $22 billion by 2022.

Another example of its popularity is upscale retailer Barneys New York announcing it will open a line of "cannabis lifestyle" shops inside its stores in California, starting with its Beverly Hills flagship this month. Barney’s is partnering with upscale cannabis company Beboe, and the new “luxury cannabis and wellness concept shop” will be called “The High End.” The shops will sell vaporizer pens and pastilles, and other CBD-related products.

“Barney's is definitely excited about opening up a shop-in-shop in California,” says David Weiss, a partner at Chicago-based consulting firm McMillan Doolittle. “They’re selling a lifestyle brand, which is another aspect to this as it goes mainstream. There’s a certain cool factor that some consumers are latching onto.”

Advantages for Simon in the GGB kiosk deal

“You’re getting something interesting that people will talk about, that people are curious about,” Weiss says, referring to the soon-to-open Seventh Sense kiosks in some Simon malls. “Shoppers will stop and take a look when they’re walking through a mall space. It probably makes them linger a little bit longer in the mall.”

Weiss adds that it’s a “nice incremental opportunity for the malls to replace staid or declining kiosk categories, and potentially, watch Green Growth move into full stores as the category grows.”

Landing a national company like GGB is a boon for the REIT as mall owners continue to see struggling retailers file for bankruptcy and close stores, and they look to backfill large chunks of space. Sears and Gymboree recently filed for bankruptcy while J.C. Penney, Victoria’s Secret and Gap are shuttering many underperforming mall stores. Simon has also been backfilling vacancies with non-traditional uses, including hotels, apartments and co-working spaces.

It’s all about innovation in retail

Simon’s commitment to innovation is what put it at the forefront in the mall business, says Amanda Nicholson, professor of retail practice at Syracuse University in New York.

“You have to reinvent yourself every day in order to stay in the game. I think they’re trying to redefine their spaces,” Nicholson says.

She notes that Simon was among the first to partner with clicks-to-bricks retailers like Warby Parker and to bring in high-end restaurants to its properties to replace food courts. “I think what they’re doing with this is completely, intuitively correct. Now we will see if the customers will come. I wouldn’t be the slightest bit surprised if they do.”

The Simon/GGB partnership announcement comes shortly after Simon reported its fourth-quarter 2018 earnings on Feb. 1. Simon reported a record quarter, even while many mall owners around the country continue facing challenges with brick-and-mortar retail.

The REIT reported a 25 percent increase in net income in the fourth quarter to $712.8 million, while funds from operations (FFO) were up 3.5 percent to $1.2 billion. For the year, the REIT reported a 5.3 percent jump in reported U.S. retailer sales per sq. ft. at $661. Occupancy remained steady at 95.9 percent.

Advantages for GGB in the Simon deal

"Our partnership with Simon allows GGB to launch our brands and CBD products in premier shopping destinations across the U.S.," said Peter Horvath, CEO of GGB, in a prepared statement. “We know this arrangement gives us access to the best locations, foot traffic, and consumers.”

The partnership is a logical step for the company, Weiss says. “CBD-infused beauty or topical wellness products will grow as the consumer becomes more comfortable with the category. Acceptance will take education, and kiosk locations have always had a salesperson providing education to the curious consumer.”

Meanwhile, experimenting with a kiosk is low risk because kiosks don’t carry long-term leases, he adds.

Nicholson, too, says the partnership is a smart strategy for GGB.

“I think it’s an enormous advantage for them,” she says. “Simon can help get them on the map very quickly.

Will the kiosks be controversial?

“Maybe there’s going to be some huge pushback about this,” Nicholson notes, but she doubts it. Simon isn’t going to its malls in more tertiary cities with this concept to start with, but big cities like Indianapolis, Houston and New York, she says.

“I think they will go to places where they’re pretty sure there will be a big enough customer base, and the customer base with enough understanding of what’s going on [with CBD] that they won’t immediately object.”

However, that doesn’t mean that there won’t be shoppers who write letters saying it’s “absolutely disgraceful,” Nicholson adds.

“But I think that will die within a few months, when everybody realizes that people aren’t going around the mall high as kites... or whatever people might think,” she says.