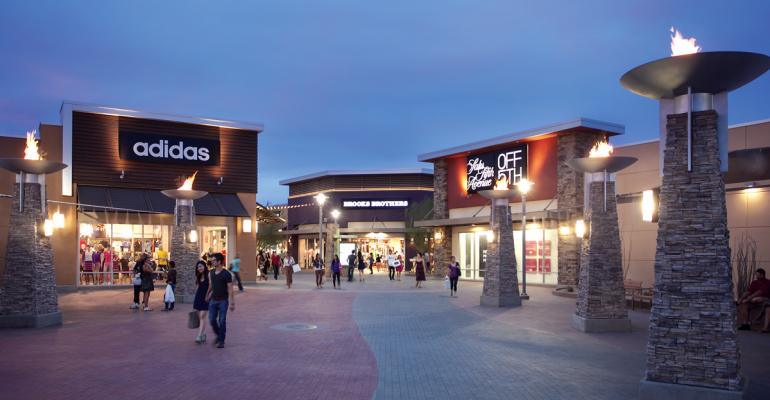 Simon Launches Online Platform to Drive Business to Outlet Centers. But Is This Move Too Little Too Late?

Shop Premium Outlets will be able to shop at multiple brands with discounts of up to 65 percent and Simon will take a commission on sales.

Simon Property Group, the largest mall owner in the U.S., is going online with its own online shopping platform.

Simon is testing Shop Premium Outlets, or SPO, to help beef up traffic and sales—both online and in stores—at its outlet malls across the country.

The Indianapolis-based REIT is in beta-testing with its VIP Shopper Club, which has about 4 million members nationwide, and plans a complete public rollout in the upcoming months.

CEO David Simon calls the new website a “fifth platform” for Simon. That’s in addition to its regional malls, outlet centers, mixed-use shopping center in its Mills portfolio, and its international properties. The company owns 69 Premium Outlets across the country.

"Millions of people love shopping Premium Outlets and SPO will offer them the convenience of discovering the best outlet deals, anytime and anywhere,” Simon said in a statement. “We're beta-testing the platform with just under 2,000 brands and over 300,000 products,” all with discounts of up to 65 percent off retail prices.

Plans call for brands and retailers to oversee their own online product pages and offerings. Consumers can buy from multiple brands and check out directly through Simon’s website. The REIT will take a commission on the sales.

During the REIT’s April earnings call, Simon told investors, “We're excited to have launched the beta version of Shop Premium Outlets and are encouraged by the feedback we have received thus far. This is a unique long-term investment for us, which capitalizes on the power of the Premium Outlets brand, our large base of loyal and engaged shoppers and the strong relationships we have with our retail partners. We look forward to a full public launch. Ongoing cost in the platform will continue with these costs running through our income statement.”

Simon launched the website because it “identified a void for an online marketplace dedicated to outlet shopping,” Achara said. “With a total addressable market of over $200 billion and growing, there’s an opportunity to create tremendous value for brands and shoppers by launching the world’s premier online outlet destination.”

What do industry experts say?

“We think it’s an interesting move,” says Ranjini Venkatesan, vice president and senior analyst at Moody’s Investors Service. “As they mentioned in their earnings call last month, they’re trying to integrate their physical store strategy with the online strategy.”

There have been questions specifically related to the fact that this move looks more like e-commerce and technology as opposed to Simon’s business of owning malls, outlet centers and other physical retail assets, Venkatesan notes.

“David Simon alluded to the fact that he still will be focused on incoming cash flows, but this might be a good service to add on,” she says. “The way we’re thinking about it is it’s in the early days. We don’t know how effective it’s going to be, but if it’s another way that helps bring the shopper to its assets or helps Simon connect with the shopper by way of data and analytics, it can’t be bad.”

The analytics that Simon will obtain in terms of shopping habits and brand preferences in an area beyond in-store purchases will likely be valuable as well, Venkatesan adds.

“For Simon, it’s something that they’re trying that’s different, and given that everybody is thinking in terms of omni-channel and fulfilling the shoppers’ requirements—whether it’s by way of connecting to the store and finding another delivery mechanism or getting the shopper into the store to pick up the purchase—it’s just another type of execution,” Venkatesan says. ”I would suspect that not only are other landlords looking at this, but the retailers are looking at it, too.”

She says she’s curious how retailers will respond. They all have their own online platforms, so the question is how this will fit into their strategy. One area where this may be an advantage is on the fulfillment side, because of how much it costs to deliver products to people’s homes as opposed to having them pick up products on location.

It’s not certain, however, whether Simon’s online shopping website will have any meaningful impact this year, since it’s in beta version.

“Depending on what we hear from them over the next few quarters, we will see whether it’s affecting sales per square foot or traffic into their outlets,” she says. “I think it’s too early to figure out what the advantages are and what the benefits would be.”

Simon has always been an innovator in the market, adds Philip Kibel, Moody’s associate managing director. “They’re always looking at how to better attract customers and better market their malls. It’s all part of their strategy,” he says.

Not everyone’s a fan of the strategy

“It’s nonsense and a waste of time,” says Nick Egelanian, president of SiteWorks Retail Real Estate Services, a retail real estate consultant firm based in Annapolis, Md. He says the move is irrelevant and late.

“Simon is going to jump in now?” he asks. “Twenty years past the beginning of the [internet] business and when it’s cooling. And they’re going to somehow have an impact that’s meaningful relative to Amazon and Walmart and others?”

E-commerce sales in the first quarter of 2019 accounted for 10.2 percent of total U.S. sales, according to estimates by The Census Bureau of the Department of Commerce. The 12.4 percent growth last quarter, however, represents a continuing slowdown of e-commerce spending growth, reports Marketplace Pulse.

For the majority of the last decade, U.S. e-commerce was growing at 15 percent every quarter. The last quarter of 2018 and the first quarter of 2019 experienced the slowest growth since late 2014.

“The growth rate of the internet is down, and if you’re not sure about it just look at Amazon’s statements recently,” Egelanian notes.

While Amazon reported its most profitable quarter ever in the first quarter 2019, Amazon CEO Jeff Bezos confirmed that the company's growth is slowing as more bricks-and-mortar retailers boost their digital capabilities.

Egelanian says he heard that Amazon had 16 reps at the recent ICSC RECon industry conference.

“Don’t believe me. Believe them because they weren’t at RECon to do e-commerce deals,” he notes. “You’re going to see a ton of experiments [with bricks-and-mortar] coming out of Amazon in the near future.”

“As Simon is just getting into e-commerce, Amazon is done and moving on to bricks-and-mortar. It’s pretty remarkable,” Egelanian says.

In addition, Egelanian notes that all of the outlet centers’ retailers have their own websites and are already doing omni-channel.

What Simon and all retail landlords ought to be doing is converting their malls into more relevant places for consumers to spend discretionary income and have better experiences, Egelanian notes. This is true for outlets as well, he adds. The more successful outlet centers are integrating restaurants and other uses into their tenant mixes.

“But this focus on the internet is a waste of time,” Egelanian says, adding that he doesn’t think it’s going to move the needle.