/sites/all/themes/penton_subtheme_wealthmanagement/images/logos/footer.png
Recent
Recent
Nine Must Reads for the CRE Industry Today (Dec. 1, 2021)
Nov 30, 2021
What Does Zillow’s iBuying Failure Mean for SFR Investors?
Nov 30, 2021
RIA Edge: Driving the Next Generation of Growth for the RIA Community
Nov 30, 2021
Booming Atlanta Becomes Epicenter of U.S. Inflation Surge
Nov 30, 2021
Featured
The 10 Best and 10 Worst States in Which to Retire in 2021
Jul 15, 2021
Poll: 15 Classic Books on Investing and the Markets
Apr 03, 2020
25 U.S. Markets Adding the Most Multifamily Units This Year
Feb 03, 2021
Fifteen Must-Listen Business Podcasts for Advisors
Aug 14, 2020
Bloomberg
brought to you by 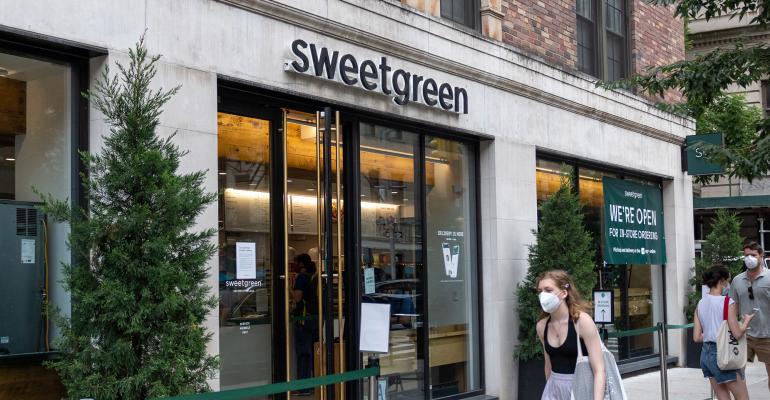 Salad Chain Sweetgreen Is Planning a U.S. IPO This Year

Founded in 2007, the chain had developed a cult following among bankers, tech workers and others.

(Bloomberg)—Sweetgreen, the salad restaurant chain popular among office workers, is planning an initial public offering in the U.S., according to people with knowledge of the matter.

The Los Angeles-based company is working with Goldman Sachs Group Inc. on a listing that could happen as soon as this year, some of the people said, asking not to be identified because the information is private.

A Goldman Sachs representative declined to comment. Sweetgreen representatives didn’t respond to requests for comment on the planned IPO.

Founded in 2007, the chain has developed a cult following among bankers, tech workers and others. The company announced this month a partnership and investment from professional tennis player Naomi Osaka.

The company raised $156 million from Durable Capital Partners in January, valuing it at $1.78 billion, according to a Sweetgreen spokeswoman. That followed a $150 million funding round in 2019 led by Lone Pine and D1 Capital, according to a statement at the time. Other backers include Fidelity Investments, Live Oak Endeavors, Blue 9 Capital, Big Loud Capital, Reshape Holdings, True Ventures and T. Rowe Price, PitchBook data shows.

Started by Georgetown University graduates Jonathan Neman, Nathaniel Ru and Nicolas Jammet, Sweetgreen operates more than 120 restaurants, according to a press release in May.

--With assistance from Katie Roof.