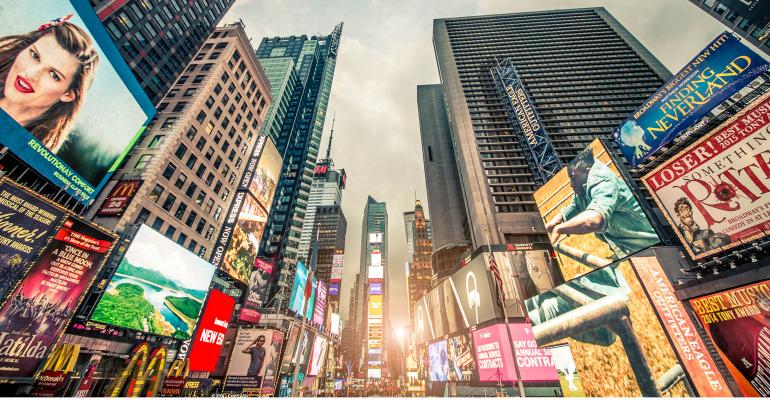 Asking rents in the area have slipped and some of its largest merchants have closed stores in recent years.

Gap and Cover Girl are among merchants looking to leave stores in the district, where companies have historically been willing to swap high rent payments for daily exposure to hundreds of thousands of tourists and commuters.

But as shopping moves online and bricks-and-mortar spaces shrink, real estate brokers are on the hunt for new tenants to occupy a pair of adjacent flagship stores at 1530 and 1532 Broadway -- one for Gap and one for its discount brand Old Navy.

There’s also space available at 30 Times Square, where beauty giant Coty Inc. opened its first-ever Cover Girl store a little more than a year ago, according to people with knowledge of the matter. Those come on top of a four-story flagship at 1551 Broadway that American Eagle Outfitters Inc. may depart.

“Some retail is just antiquated,” said Brett Herschenfeld, who oversees the retail unit of SL Green Realty Corp. It “hasn’t evolved with the times and they either fix it to the meet the consumer segment or they’re closing stores.”

While Times Square hasn’t been hit as hard as other neighborhoods by mushrooming vacancies, asking rents have slipped and some of the district’s largest merchants, including Toys “R” Us, have shuttered stores in recent years. Others are evaluating whether their outsized spaces are the best way to generate sales while giving shoppers the experiences they flock to the area for.

“The most successful approach to Times Square will be to think outside of the large box,” said Phil Granof, chief marketing officer of NewStore, operator of a mobile e-commerce platform that works with physical stores. “Breaking it down into smaller pieces, there might be more value there.”

San Francisco-based Gap Inc. has roughly 80,000 square feet at the two locations in Times Square, with leases that run through 2032, according to marketing materials seen by Bloomberg. Coty has about 10,000 square feet across five floors that is being marketed for sublease through 2021.

The buildings all come with massive digital billboards. But in an era when advertising has shifted to social media, companies are questioning the cost of pushing their wares in Times Square.

“The value that brands will pay for the exposure in Times Square on a permanent basis is under some pressure,” said Michael Hirschfeld, a retail broker at Jones Lang LaSalle Inc. “A lot of mass-market types of consumer brands are now reaching you directly on your phones or Instagram.”

Gap Inc., on the hunt for a permanent chief executive officer after Art Peck was fired in November, is closing stores as it struggles to revitalize a label that has fallen out of step with shoppers. Old Navy has been a bright spot for the company, but that brand has also faced challenges in recent quarters, including increased competition from other discount chains.

While Times Square may be losing its luster for some companies, there’s still plenty of interest in the area from current and prospective tenants -- and that shows how powerful it remains for retailers, according to Steven Soutendijk, a broker at Cushman & Wakefield.

“It’s not just about marketing and branding anymore,” he said. “It’s about the footfall and the shoppers that are there.”