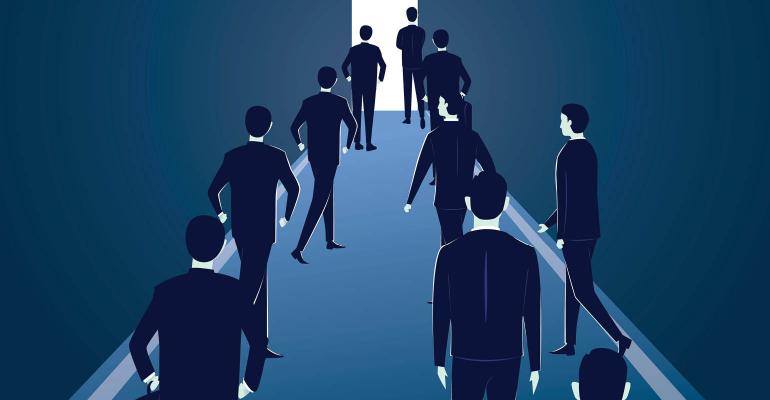 (Bloomberg Opinion)—Many of the retail industry’s challenges in 2020 will be familiar, such as adapting to the rise of e-commerce and trade-related uncertainty from Washington. But the lineup of CEOs navigating those conditions will include many new faces.

There were more CEO exits in the retail industry in 2019 than in any year since at least 2010, according to data from Challenger, Gray & Christmas.

Turbulence at the Top

The leadership shake-ups in retail don’t appear to fit any particular pattern. There were carefully choreographed, harmonious baton passes, such as Best Buy Co. naming Corie Barry to succeed Hubert Joly. There were bombshells such as Steve Easterbrook’s abrupt ouster from McDonald’s Corp. over an inappropriate relationship with an employee. There were rebukes of poor performance, such as Art Peck’s departure from Gap Inc. And there were some left-field surprises, such as Tractor Supply Co. poaching Hal Lawton from Macy’s Inc.

Retail’s recent bout of turbulence at the top is not such an outlier in corporate America; Bloomberg Opinion’s Stephen Mihm recently noted an uptick in CEO departures overall in the past few months. But it adds a certain intrigue about which retailers will end up in the winners’ circle next year.

Here are predictions for how some of the more high-profile episodes of C-suite musical chairs will play out.

CEO changes that are reason for optimism: By the time activist investor pressure finally led Bed Bath & Beyond Inc. to dump longtime CEO Steven Temares, the move was long overdue. But the board has scored by luring Mark Tritton — the chief merchant at its on-fire competitor, Target Corp. — for the job. Tritton’s experience creating covetable private-label brands and reimagining store displays are exactly what the big-box home goods chain needs. Meanwhile, though Gap has not yet named a permanent successor for the now-departed Peck, the company may be better off without a leader who tried but failed for five years to revive its flagship brand.

CEO changes that are reason for pessimism: The biggest headscratcher comes from Nike Inc., which announced that CEO Mark Parker is to be replaced in January by John Donahoe, a former ServiceNow and eBay Inc. executive. Sure, Donahoe knows Nike’s business from serving on its board, but his tech-centric resume is a weird fit for a company that thrives on its marketing savvy and merchandising expertise. There is potential for trouble, too, in the leadership plans of Under Armour Inc., where founder Kevin Plank is set to relinquish the CEO title to COO Patrik Frisk in the new year. Plank is to become chairman and “brand chief,” and Frisk will still report to Plank. This set-up is reminiscent of when Ralph Lauren first tried to step back from the CEO role of his namesake company while staying on in a creative position. The fashion mogul clearly had trouble releasing the reins, and it cost the company a highly capable CEO, Stefan Larsson.

Elsewhere in the apparel world, Ascena Retail Group Inc., corporate parent of Ann Taylor, Lane Bryant and other brands, probably will regret tapping an insider, Gary Muto, to replace David Jaffe. This company needs the kind of total overhaul that an outsider would be better equipped to pull off.

CEO changes that promise business as usual: Electronics giant Best Buy is in good hands under Barry, a veteran executive of the chain who had served as its CFO and chief strategic growth officer. Thing is, the electronics giant was already in good hands under Joly, who had steered the chain through an improbable comeback. So expect steadiness for the retailer in the year ahead —by no means a bad thing. Same goes for McDonald’s: Even though it said goodbye to a successful CEO under far more soap-operatic circumstances, his replacement, Chris Kempczinski, is a close lieutenant poised to stick to the same playbook that has fueled the fast-food giant’s recent strength.

CEO change wild card: It’s understandable that Tapestry Inc.’s board had lost confidence in recently departed CEO Victor Luis. The company that used to be named Coach has been struggling to boost the Kate Spade brand it acquired in 2017, a bad sign for a company intent on transforming into a luxury conglomerate. Luis has been replaced by Jide Zeitlin, a longtime Tapestry board member. He has little experience in the retail or fashion worlds, which is concerning. But his finance industry chops could prove invaluable in future deal-making — an essential ingredient in the company’s quest for growth.

To contact the editor responsible for this story: Michael Newman at [email protected]