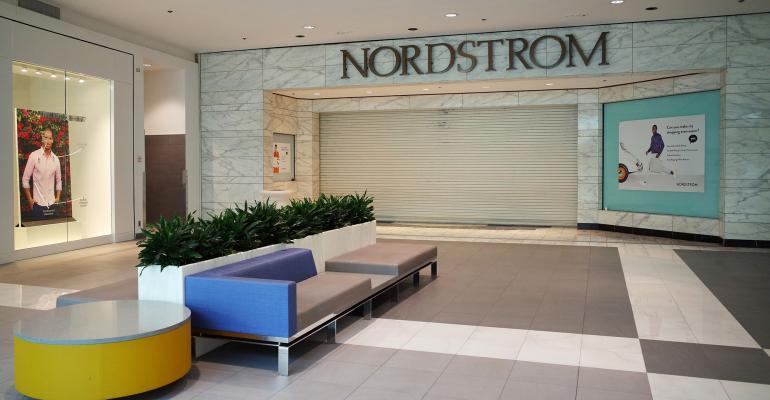 As Retail Anchors Go Under, Landlords Offer Rent Concessions in Exchange for Other Tenants’ Co-Tenancy Clauses

As more U.S. department stores and other anchor retail tenants file for bankruptcy and close permanently, landlords face yet another problem in an already dire retail environment—co-tenancy clauses.

When anchor stores go dark in a retail center or mall—or a certain amount of overall space remains unoccupied—it can trigger co-tenancy clauses in leases that can allow in-line tenants to demand rent reductions or even break their leases.

As many as 25,000 U.S. stores could permanently close this year as the COVID-19 pandemic accelerates the retail turmoil, according to global marketing research firm Coresight Research. So far in 2020, more than 4,000 stores have permanently closed.

Swiss bank and money manager UBS forecasts that 100,000 bricks-and-mortar stores will permanently shutter by 2025, while online sales are anticipated to soar to 25 percent of total retail sales. These trends began before COVID-19, but have picked up momentum during the pandemic-related shutdowns. Even as stores reopen across parts of the country, some shoppers fearing the virus are steering away from crowds and public spaces like malls, and opting to shop online.

Many malls are struggling as anchors J.C. Penney and Neiman Marcus filed for bankruptcy and are closing stores, while Macy’s and Nordstrom are also closing locations.

When malls or shopping centers lose an anchor tenant and the space isn’t backfilled within a certain amount of time, co-tenancy clauses are set off and can allow smaller tenants to switch to percentage rent or reduced rent or terminate their leases. These co-tenancy agreements protect smaller retailers that depend on anchor tenants to drive foot traffic.

In a typical anchor co-tenancy clause, if one or more identified anchors goes out of business, rents immediately reset, often down to 50 percent of what they currently are, typically for about a year, notes Tom Mullaney, managing director of restructuring services at real estate services firm JLL.

If the co-tenancy problem continues a full year, the tenant will often have the right to terminate the lease.

“With all of the department store chain closings, this is increasingly becoming a concern to everybody, and you run the risk of this downward spiral where anchor closings lead to reduced rent rolls for the landlords, which leads to more store closings,” which leads to reduced profit, Mullaney points out.

Some mall owners are taking tactical steps to try to stem the tide.

For example, increasingly, when landlords restructure leases with retailers they’re saying they “will work with you on your rent, but you need to remove your co-tenancy clause,” Mullaney notes.

While it’s case by case, some tenants are willing to agree to those terms. Mullaney has a European apparel company client, for example, whose mall landlord said it would cut the retailer a deal if they removed their co-tenancy clause.

“My client said, ‘You know, we don’t really care about the co-tenancy. We’re going to be there anyway,’” Mullaney says.

Another strategy more landlords are trying is requesting that a tenant’s kick-out right be deleted or delayed. A kick-out clause allows for ending the lease before the expiration of the term if a specific sales threshold wasn’t met by the tenant. Typically, the tenant requests the clause.

“It’s a way for tenants to have a ripcord to bail out,” says Mullaney. “What landlords are saying is, ‘Waive that right and I’ll reduce your rent or do whatever it is you’re asking for.' That reduces the risk of that tenant a year from today or two years from today pulling that ripcord and leaving. Now they have much more certainty that that tenant is going to stay through their whole lease term.”

“We’re seeing more and more requests to do that and it makes complete sense, but it’s a horse trade,” Mullaney adds. Some tenants agree to those terms and some tenants want the option to leave the lease early.

Co-tenancy can create opportunity to renegotiate

Retailers don’t necessarily want to leave just because a co-tenancy clause has been breached, according to Jan Kniffen, a retail consultant and founder of J. Rogers Kniffen Worldwide Enterprises, an equity research and financial management consulting firm specializing in retail.

“They can say I have the right to leave, but I’d like a better deal,” he notes. The tenant might stay with a better deal, or they might want to reconfigure their lease. Or if it’s a bad store, they might just walk.

However, Kniffen says this isn’t a COVID-19 effect. “That’s pre-COVID. Penney’s and Macy’s have been closing stores for a long time,” he points out. But it appears that landlords are more willing than ever to work with retailers during the pandemic.

It’s no secret, Kniffen says, that many mall landlords have said they had maybe 30 or 50 percent of tenants pay rent last month. “Cash flow went to zero for a lot of these guys.”

Retail landlords and tenants are trying to negotiate agreements everybody can live with because nobody wants their stores or their malls to go dark, he notes.

Will moves like Simon/Brookfield possibly bidding on J.C. Penney help stem the fallout from co-tenancy clauses?

J.C. Penney is a major anchor for landlords Simon Property Group and Brookfield Property Partners. If J.C. Penney continues to close stores, these landlords could have to deal with other retailers at their properties invoking their co-tenancy clauses.

Recent reports indicate that Brookfield is looking to team up with Simon and Barneys New York parent company Authentic Brands Group in a possible bid on J.C. Penney.

The deal would ensure that the retailer continues operating and it at least postpones the challenge of finding new anchors in a grappling retail environment, according to the Real Deal. The landlords would also assume control of certain property rights for their malls.

Simon and Brookfield have partnered before. They teamed up to purchase Forever 21 out of bankruptcy earlier this year. GGP, which Brookfield later acquired, also partnered with Simon to purchase teen apparel retailer Aéropostale in 2016.

“I’m not close to the J.C. Penney situation, but it’s definitely something that I could see because of the amount of square footage that J.C. Penney represents,” notes Mullaney. “I’m sure [Simon and Brookfield] are looking at it carefully. But the concern I would have is it’s not clear to me that there’s a reason for J.C. Penney to exist… There are certain concepts out there that you wonder whether their time has passed.”

While Kniffen didn’t discuss the J.C. Penney strategy in particular, he says developers and landlords have bought into retail companies before COVID—like Forever 21 and Aéropostale. “Obviously, if you’re a developer you would like to keep your mall full,” he notes. “You want to keep stores in there that people have heard of.”

Experts contend that it’s not an “us vs. them” situation when it comes to landlords and retailers during these unprecedented times. The U.S. is over-retailed, e-commerce competition continues to soar and COVID-19 is taking its toll.