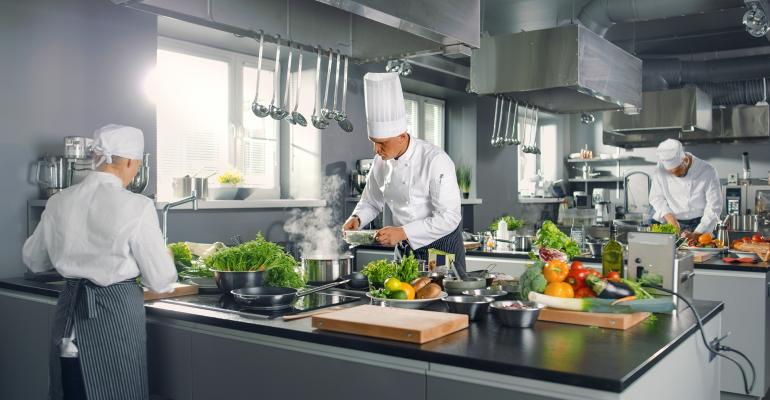 Restaurants and grocery stores are experimenting with kitchen-only sites and curbside pick-ups amid rising consumer demand for food delivery, according to CBRE research.

Increasing delivery orders are encouraging sales growth in the food and beverage industry, especially for restaurants. Restaurant spending alone currently accounts for approximately 15 percent of total retail sales, according to CBRE. The food and beverage industry, including both meals prepared at home and those consumed at restaurants, takes up 24.2 percent of total retail sales, or around $1.5 trillion, according to the U.S. Census Bureau. Both figures are expected to stay stable or even slightly increase, according to Melina Cordero, global head of retail research at CBRE.

But increases in the number of delivery orders also boost delivery costs. To solve this, restaurant chains are testing kitchen only or shared kitchen outlets—opening kitchens with no dine-in options, specifically designed to cater to online orders. By doing this, restaurants decrease delivery expenses and pay less effective rent on their spaces.

“The off-premises facilities are not tied specifically to a restaurant, it’s really being used primarily right now by independents,” says David Orkin, restaurant practice leader at CBRE. “It’s probably more pronounced in larger East Coast urban markets where the cost of building full restaurants is high. It clearly lends itself better to menus that have delivery friendly items, so it’s not for everyone and probably not [for] fine dining. In most cases, this will be fast-casual or moderately priced casual dining where the expectation of the customer is lower.”

These kitchen spaces, on average, are a third of the size of a typical restaurant space, consisting of approximately 2,000 to 2,500 sq. ft. Though the idea is still in its infancy, pizza chains such as Domino’s Pizza could be viewed as pioneers of sorts, as certain locations are just kitchens with no sit-down areas, solely intended to take delivery orders.

“There are multiple models and there’s not enough data to determine which is the right way to go,” says Orkin. “Some companies will control it themselves and go lease space. There are some companies that are setting up third-party kitchens, where it’s almost like a food court set-up, where everybody gets 500 [square] feet, and there’s half a dozen to 10 different tenants that are in there, all producing what they need to produce. There are common shared elements, like refrigeration and storage, and somebody acts as the landlord or the manager of the facility.”

Although the food and beverage sector is growing at a faster rate than traditional retail, the sector is less affected by e-commerce competition. E-commerce currently takes up close to 15 percent of total retail sales, according to JLL research.

“I see [e-commerce] absolutely affecting the food and beverage industry, but I would say it’s going to affect it differently than it has other sectors of retail,” says Cordero. “And that is because delivering food and beverage is just a different and much more expensive beast than it is delivering a t-shirt or a pair of socks.”

While restaurants experiment with kitchen-only and shared kitchen concepts to satisfy consumer demand for rapid and efficient delivery, grocery stores are looking to improve their in-store and curbside pick-up options. Expanding curbside pick-ups will not require more square footage, but rather, a repurposing of existing space in the store.

“[Grocery stores] may just build out their curbside pick-up or dedicate more space at the front of the store towards the pick-up drop-off [area] or utilize the storage sections of the store,” says Cordero. “Over time, we anticipate check-outs will disappear with automation and digital scanning, so that is space that could free up for other uses.”

Unlike in traditional retail where delivery to the customer seems to be the preferred option, the physical store will play a vital role on how e-commerce affects the food and beverage industry, according to Cordero.

“In groceries, in particular, the store is going to remain a really pivotal part in delivery. There’s going to be a lot more curbside pick-up, in-store pick up of groceries, than we’ve seen in things like apparel,” says Cordero. “And then with restaurants, delivery is certainly set to rise, but there are several different models as to how that might play out, whether it’s third-party players or the chains themselves.”

Although grocery store openings increased by 30 percent in 2018 over 2017, consumer spending is increasingly shifting away from grocers to restaurants, according to CBRE research. Around 50.3 percent of consumers’ food and beverage dollars were spent at restaurants, with the other 49.7 percent spent at grocery stores. In the early 2000s, purchases at grocery stores accounted for approximately 55 percent of that spending.

Restaurant sales are projected to reach $863 billion this year, driven by an expanding economy and elevated consumer sentiment, according to the National Restaurant Association.

“The more income consumers have, or feel they have, the benefit tends to be in restaurants,” says Cordero. “The other thing is, the next downturn we can’t say is going to behave exactly like the last one because structurally the food and beverage industry has changed. There are a lot more fast-casual and cheaper dining options than there were during the last recession. The fast-casual sector really took off in the height of the recession, that kind of fueled that growth because the consumer was more receptive to cheaper options.”