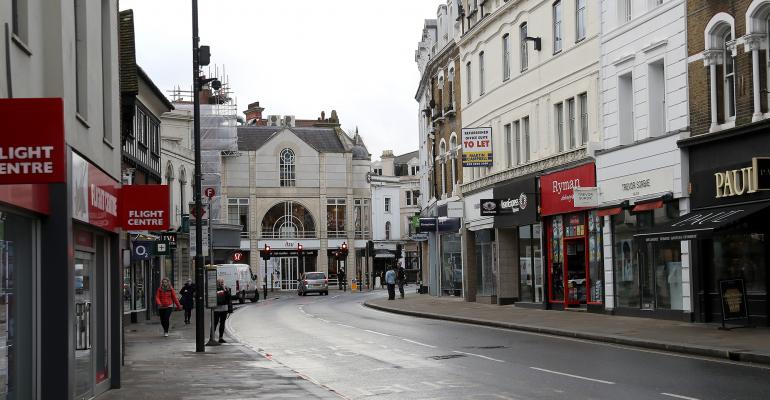 Rent’s Due and No Revenue: U.K. Businesses Teetering in Lockdown

One lobby group estimates 250,000 small firms are at risk of going bust.

(Bloomberg)—The U.K.’s third major lockdown to control the coronavirus could be the final straw for thousands of businesses struggling to pay rent and taxes with little or no money coming in the door.

“It is costing us thousands of pounds a week, even being shut, and we have zero income,” said Andrew Wong, owner of the upmarket Chinese restaurant A. Wong in London’s fashionable Pimlico neighborhood. “I think all the time about shutting down and walking away, though I’m not going to do it.”

While the economy appears to be adapting better to virus curbs -- gross domestic product shrank 2.6% in November versus 19% in April -- the same can’t be said about company finances. One lobby group estimates 250,000 small firms are at risk of going bust. Almost 10,000 pubs and restaurants licensed to serve alcohol closed permanently last year, according to consultants CGA and AlixPartners.

The crisis may force Chancellor of the Exchequer Rishi Sunak to extend support for business in his budget statement on March 3. The Treasury has already spent some 300 billion pounds ($400 billion) supporting workers and businesses through the crisis, pushing its debt above 2 trillion pounds for the first time.

Executives are turning increasingly gloomy after scientists recommended keeping restaurants and bars shut until at least May and Prime Minister Boris Johnson dropped assurances that the rules would loosen around Easter.

“It’s been a grim year,” said Mike Cherry, National Chair of the Federation of Small Businesses. “Many have now found themselves on the brink of collapse, and these exceptionally hard times are set to continue.”

What Our Economists Say

“The hit to the economy from the latest round of restrictions will be more significant than in November when England was placed in partial lockdown.

While government support for workers has helped stave off a spike in unemployment, the aid for businesses has been less comprehensive and more conditional. Firms have been given some relief from state levies, but have generally required companies to load up on debt to survive. There’s also a patchwork of grants that in some areas isn’t enough to cover rent.

The U.K. has been hit harder than most because of its reliance of services, which make up almost 80% of the economy. GDP in the third quarter was 8.6% below its level at the end of 2019, the worst performance among Group of Seven countries.

The hardest hit businesses in Britain work in retail and hospitality, which together employ 17% of the U.K. workforce. More than half of those providing accommodation and food services have less than three months cash to spare. A third have little or no confidence they will survive until April, according to the Office for National Statistics

Hospitality could survive with some restrictions -- like the ones in place when they reopened in July after the first lockdown -- but not the current rules, said Tim Martin, chairman of JD Wetherspoon Plc, a pub chain that employs 43,000 people.

“Without consultation, the rules were constantly changed -- curfews, table service only, drinks with a meal only, ever changing tier systems and lockdowns,” Martin said. “The industry will get by if the government reverts to the July 4 rules, but otherwise there will be continuing insolvencies and redundancies.”

The view from executives contrasts with what the Bank of England has been saying. The central bank’s chief economist Andy Haldane has been expecting a quick recovery from the worst recession in three centuries once a vaccination program takes hold.

“If we get that recovery that I expect to start coming on stream, probably at the rate of knots from the second quarter, that will hopefully then eat away and improve the prospects of reemploying those million people who have lost their jobs” Haldane said at a webinar on Jan. 19.

For now, the pain is mounting. Retail sales were unexpectedly weak in December, confounding forecasts for a quick bounce-back after November’s lockdown. Paperchase Products Ltd., which sells stationery, sought protection from creditors this month after its stores were forced to shut during the vital Christmas period. Debenhams, a department store chain employing 20,000 and owned by Arcadia Group Ltd., collapsed last year.

In the spa town of Bath almost 100 miles west of London, Meticulous Ink closed its stationery store and and halted calligraphy workshops that previously fed a third of the revenue. Athena Cauley-Yu, who runs the stationery and letterpress printing shop, said she’s counting on government support and a rent reduction from the landlord.

“It’s the cashflow, balancing it,” Cauley-Yu said. “There’s so much juggling. It’s very much like living month to month. We’re hanging in there.”

Debt is another burden. More than three quarters of small firms are servicing some sort of loan, up from just over half before the pandemic, the FSB estimates. Of these, 40% describe the burden as unmanageable.

Even the existing government support is proving problematic. Only a quarter of the special 1,000-pound payments promised to some pubs over Christmas has been paid out, according to the British Beer & Pub Association. Less than half of the grants offered in the November lockdown have been disbursed.

“If businesses have no means of generating revenue and they have no savings left, there is nowhere for them to go,” said Kate Nicholls, chief executive of lobby group UKHospitality. “Premises are closed, but bills continue to go out. Rent debt is piling up for some businesses, and we have heard that some are struggling to access loans and grants. The result is going to be more business failures and even more jobs lost.”

--With assistance from David Goodman and Andrew Atkinson.