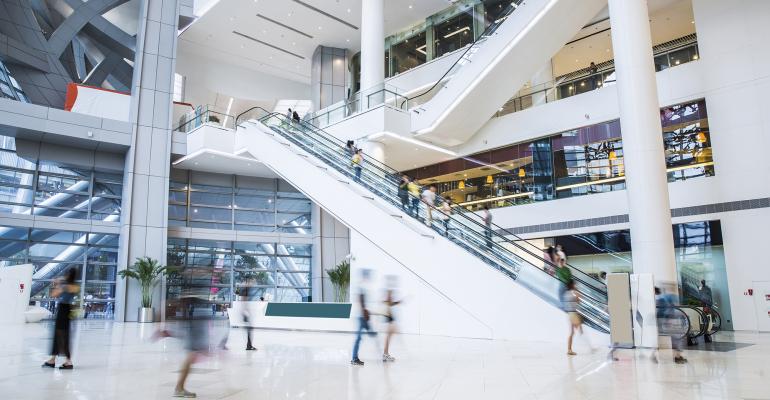 The “old model for mall success is on life support,” industry experts say.

Malls are taking a hit with the loss of anchor department stores like Sears, J.C. Penney, Bon-Ton, Carson’s and Macy, not to mention in-line tenants.

In the wake of more than two dozen Sears closures, the regional mall vacancy rate ticked up 30 basis points to 9.3 percent in the first quarter of 2019, reported real estate research firm Reis Inc. However, growth in average rents was flat.

Of the more than 16 million sq. ft. of retail leases signed in the last five quarters—across all retail sectors—Reis reported grocery stores were the No. 1 new tenant, followed by home/houseware stores, gyms/fitness studios, discount variety stores, and discount clothing stores. Trampoline parks—part of the much-talked about experiential retail—were also in the top 10.

Still, other chains expected to shutter stores this year include J.C. Penney, Payless ShoeSource, Charlotte Russe and Gymboree, which will impact the roughly 1,200 malls across the country.

As big-box retailers reduce their footprints to concentrate on their most profitable stores, they’re vacating many of the weaker, less-trafficked malls, leaving owners of class-B and -C properties struggling.

Meanwhile, class-A malls in desirable locations are inking deals with higher-paying tenants to backfill besieged anchor spaces—some of which, like those housing Sears, were bringing in well-below market rents under very long-term leases.

Sears plans to close nearly more 200 stores this year, reports real estate services firm CBRE. While some see this as a “tragic dumping of millions of square feet of retail space,” many landlords see it as an opportunity to reposition and renovate their properties, even if mall owners will collectively have to invest billions of dollars to renovate the vacancies. “Sears didn’t pay a lot of rent, if any rent, and in a lot of cases owned their own box,” says Jim Sullivan, managing director and REIT analyst at financial services firm BTIG LLC.

“In general, the rents that landlords will get are multiples of what Sears was paying, and you’re bringing in a retailer or retailers that are better at their business, who generate much higher sales per square foot—whether it’s an off-price merchant like a Ross or Whole Foods or Dicks Sporting Goods. They all pay higher rent. They all do more sales. They all bring more traffic to the mall.”

Across its portfolio of Sears and Kmart stores, Sears was doing about $100 per sq. ft. in sales, according to Sullivan. The productivity at malls owned by the top regional mall REITs, including Simon Property Group, Taubman Centers and Macerich, is multiples of that, he says. “So, if you were to replace a 150,000-sq.-ft. Sears with a 12,000-sq.-ft. Cheesecake Factory, which does like $1,200 a foot, you’re replacing all the sales that Sears was doing with one restaurant that sells cheesecake.”

“Redevelop, repurpose, adapt” is the name of the game

“Those well-capitalized landlords that have a vision and a plan that makes sense will see redevelopment occur,” says Mark Hunter, managing director of CBRE’s retail property management division.

Simon CEO David Simon has told analysts that department store closings like those of Sears offer a unique opportunity. Simon will invest in excess of $1 billion to redevelop Sears stores across the U.S., including the Brea Mall in California and Phipps Plaza in Atlanta.

"Our growing development and redevelopment pipeline, combined with our A-rated balance sheet, sets us apart and allows us to continue to strengthen our platforms with a focus on the future,” Simon said in a recent release.

At the end of the first quarter 2019, Simon’s redevelopment and expansion projects, including the redevelopment of former department store spaces, were underway at more than 30 properties in the U.S., Canada, Asia and Europe. Simon's share of the costs of all new development and redevelopment under construction exceeded $1.4 billion.

“If you’re a mall owner, activity is coming from two sources,” Sullivan notes. “Those concepts that maybe haven’t been in the mall that now look at the mall as a feasible location as a big-box is available—like Round One, Life Time or Dicks.” (Or in some cases, it could be redevelopment into non-retail uses like offices, apartments and hotels).

“Or these digitally native retailers, who are very astute and market oftentimes to a younger consumer. These are astute, savvy users who know how to buy products with their phone or laptop and are very comfortable, but who would also like to see the product. That’s how we see the world developing.”

Simon isn’t alone in its repurposing and reinventing of vacancies as other REITs adapt to store closures.  The Oak Brook Center in Chicago, owned by Brookfield (previously GGP), took back a Sears and put in a KidZania.

“With the wave of food and beverage and entertainment, KidZania is in expansion mode, as are other entertainment concepts,” Hunter says.

Washington Prime Group allocated up to $325 million to renovate its Sears locations for new users.

Also, landlords are experimenting with spaces that allow new brands to open up short-term, pop-up retail and rotate in and out. Macerich launched BrandBox where young digital brands can operate brick-and-mortar stores. Macerich executives say the company will continue opening Brandbox locations as retailers like Sears, Toys ‘R’ Us and Claire’s close stores.

CBRE reports that the “old model for mall success is on life support.” However, mall real estate is still viable if landlords find ways to innovate and reinvigorate their properties. The mall isn’t dead, but it needs reinvention.

Still, it’s often the case of the “haves and have-nots”  as a bifurcation between top-tier and lower-tier malls continues.

“We cover CBL, which is clearly a B mall player that has a lot of issues, and we cover Macerich, Taubman and Simon. Cleary, there’s a dichotomy in performance,” says Sullivan. “When you look at the occupancy rate, you can see that CBL gets hit every year in the first quarter more than the other companies.”

Sullivan also points to Gap and L Brands, which are solvent retailers, but have a lot of stores and not all are performing at the level they want.

“If they say they’re going to close 50 or 100 stores, they tend to close what we call ‘marginal, full-price stores,’ which are lower productivity where they just haven’t had the growth,” Sullivan notes. “Over last five years, CBL has had virtually no growth in productivity, whereas Macerich or Simon do.”

On the other hand, if you’re an expanding, digitally native brand, you know where the most successful malls are. “Mall owners will tell you what the productivity is and you start in the A malls. You may never get down to the B malls in this cycle, because the B mall viability story is a real question mark today... But the A malls are doing fine,” Sullivan says.

In general—and this trend goes back at least five years—class-A malls continue to perform very well, says Hunter. Those malls tend to be clustered in dense markets, including New York, Boston, Los Angeles, Miami, Chicago, Denver and Dallas. “Those that are well-located and typically have a higher-end merchandise mix in better demographic areas continue to do well.”

Where you have some separation between those malls and more challenged properties is in locations where the anchor mix caters to middle- to low-income demographic groups, Hunter says.

Overall, the A-mall REIT performance metrics have held up very well since 2013, in spite of the so-called secular challenges that the industry has been facing, BTIG reports.

“Over the last five years we’ve gone through this ‘retail apocalypse,’ but what’s happened to Simon’s occupancy rate? It’s stayed at about 94 to 95 percent,” Sullivan says. “The metrics are actually holding up very well. Sales have also grown pretty impressively for the A malls.”

The bankruptcy filings by Gymboree, Things Remembered, Charlotte Russe and Payless Shoes are likely to pressure mall occupancy levels slightly in the first quarter. BTIG predicts it would probably be no more than 1 percent for A malls, and perhaps, higher for weaker malls.

“Sears started losing market share before God could spell Amazon,” Sullivan says. “All of us can list four or more reasons it should have died a long time ago. Kmart is the same thing. I also think the view of most people in the industry is a company like a Charlotte Russe had ailing sales for some time.”

Meanwhile, newer, smaller, more creative retailers are capturing the attention of younger shoppers. “We know that many of them tend to have a highly customer-centric, highly focused brand strategy, and many of them have started online,” Sullivan says.

He points to Warby Parker, which is adding a couple of hundred stores, but others include Casper, Untuckit and Glossier.