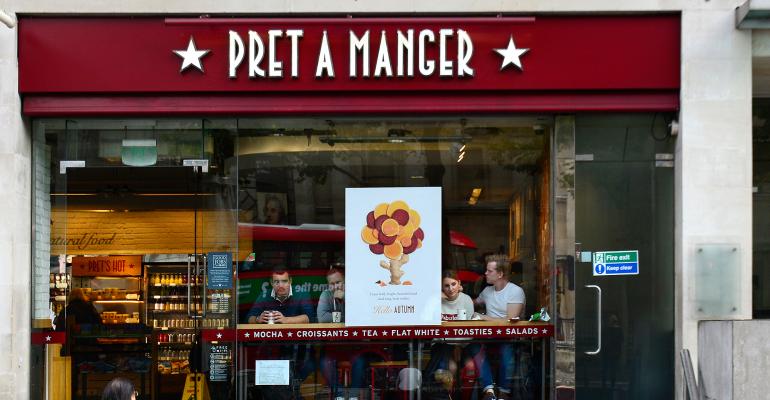 Pret a Manger Looks to the Suburbs Instead of Skyscrapers

(Bloomberg)—Pret a Manger, the coffee and sandwich shop whose expansion symbolized London’s thriving economy before the coronavirus, is shifting toward the suburbs after lockdowns left employers allowing more staff to work from home.

Chief Executive Officer Pano Christou said he’s scrapped Pret’s “follow the skyscraper” expansion program focused on city-center locations. Now, growth will come from deliveries, a loyalty program, sales in supermarkets and by moving stores to where customers are living outside of London.

His remarks highlight the upheaval London’s economy is facing after the government ordered offices closed for much of the past year to control the pandemic. Christou is among a growing number of executives anticipating a permanent shift in working patterns and will adapt Pret’s business as a result.

“The city will be very different to before Covid,” Christou said in an interview. “We won’t be going back to the days of working in the office four of five days a week. Flexible working is here to stay.”

It also upends Pret’s strategy, which previously relied on opening new shops mostly in urban areas. The company only recently developed a customer loyalty program and started embracing online sales and deliveries. Christou’s remarks suggest many of his stores may face a long-lasting decline in sales.

Pret has 389 shops in the U.K., 340 of which are in London, giving it a big stake in the city’s economy and making it a bellwether of the hospitality industry. Many of its locations were closed after Covid-19 hit Britain more than a year ago, and almost all have reopened.

It permanently shut 30 stores last summer at the height of the pandemic and is now looking for ways to firm up its business as infections decline and Prime Minister Boris Johnson loosens lockdown rules. Christou’s sense is that more people are leaving the city for suburbs, and Pret needs to go where the people are instead of waiting for them to show up to a store near an office.

“If you have a Pret when you’re at work, great, but there’s a big opportunity for us to have more Prets where people are living as well,” he said.

To draw in new customers, it has joined forces with delivery apps such as Deliveroo Plc, Just Eat and Uber Eats. It’s also marketing drinks in supermarkets and through a subscription service, hoping to build loyalty.

Asked whether Pret overbuilt in London before the crisis, Christou said, “We made the right decisions at the right time” and that there’s no plan now to close more stores. “The staff we have now are the staff we’ll keep. We won’t be looking to reduce staff’s hours if customers come in two or three days a week.”

He expects some sites, such as London’s West End, to recover faster than others, such as those in airports.

Britain’s departure from the European Union has put pressure on Pret by creating more paperwork for imports and exports. It also may dry up the supply of workers the company has depended on to staff its stores.

“As soon as the Brexit vote came through, we saw a significant drop in EU workers applying for jobs in Pret,” he said. “As a business, we need to ensure that we’ve got an appealing offer to entice people.”

--With assistance from Andrew Atkinson.