/sites/all/themes/penton_subtheme_wealthmanagement/images/logos/footer.png
Recent
Recent
Nine Must Reads for the CRE Industry Today (Nov. 29, 2022)
Nov 28, 2022
Is the Retail Reckoning for Regional Malls at an End?
Nov 28, 2022
Making Client Reporting the Center of Your Client Experience
Nov 28, 2022
Kroger, Albertsons CEOs Will Testify Before Senate About Merger
Nov 28, 2022
Featured
The 10 Best and 10 Worst States in Which to Retire in 2021
Jul 15, 2021
I’m an Advisor. This Book Changed My Life
Aug 31, 2022
Fifteen Must-Listen Business Podcasts for Advisors
Aug 14, 2020
Celebrity Estates: Jay Leno and Planning for Classic Car Collections
Feb 22, 2022
Coronavirus
brought to you by 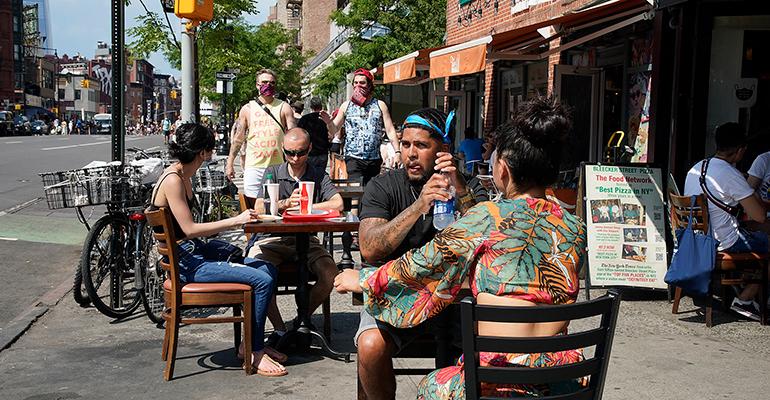 The mayor said the city would help restaurants expand their operations outdoors on sidewalks and curbside parking spaces.

(Bloomberg) -- New York City will delay the return of indoor dining, which had been planned for July 6, as other states experience a spike in Covid-19 cases after reopening their restaurants and bars, Mayor Bill de Blasio said Wednesday. The decision was made with the state, he said.

“It is not the time to forge ahead with indoor dining,” de Blasio said, citing surging outbreaks in Florida, California and Texas. “The news we’ve gotten around the country gets worse and worse all the time.”

Instead, de Blasio said the city would help restaurants expand their operations outdoors on sidewalks and curbside parking spaces.

“I’m very convinced we can help restaurants survive, but we have to do it safely and do it outdoors,” he said.

The city’s second phase of reopening, which started June 22, has permitted more than 5,000 restaurants to set up outdoors, but the limited seating comes nowhere close to returning the beleaguered industry to where it stood before the pandemic forced a citywide shutdown in March.

Studies have found the virus spreads more easily indoors and particularly among diners in restaurants. Epidemiologists have said that in some restaurants, the virus has been transmitted as it moves through an interior space via air conditioning or cooling fans. This factor, combined with New York City’s population density and its status as an international and domestic gateway, heightens the risks of viral spread.

The mayor’s news for the city, reeling after months of a virus-imposed lockdown, wasn’t all bad, though. He said the city’s beaches in the Rockaways, Coney Island, Staten Island and the Bronx will open today, and that 15 of the largest public pools will be opened by August.

To contact the editors responsible for this story:
Flynn McRoberts at [email protected]
Michael Tsang