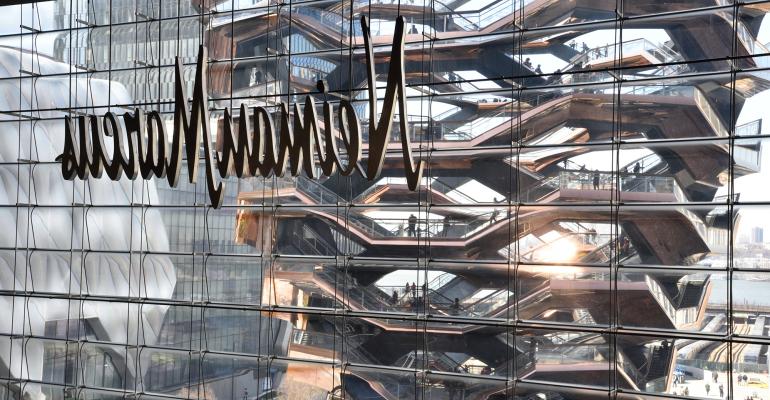 Will the struggling upscale retailer survive as it works to transform its business?

Dallas-based luxury department store chain Neiman Marcus opened its newest store on Manhattan’s west side in March and pulled out all the stops.

The flagship department store is part of a 1-million-sq.-ft., seven-story, glitzy shopping complex called the Shops and Restaurants at Hudson Yards developed by the Related Cos. and Oxford Properties Group. The store is part of the first phase of the $25 billion mixed-use new neighborhood.

Neiman Marcus occupies 188,000 sq. ft. on three levels and it’s the first-ever namesake store in New York City. It features a digital styling lounge, beauty salon and spa, restaurant, pop-up florist, a chocolate bar, a performance stage, and a kitchen offering cooking demonstrations, tastings and mixology classes. The upscale fashion retailer is trying to offer consumers an experience that they can’t get online.

"Neiman Marcus Hudson Yards will be all about providing physical and digital experiences in a way not seen at other stores, creating a personal customer experience that is seamless and magical," said  Geoffroy van Raemdonck, CEO of Neiman Marcus Group, in a release.

Will the mega-Hudson Yards work and will the struggling Neiman Marcus chain survive?

Whether brick-and-mortar retail can endure in a world that’s becoming dominated by Amazon and other-commerce players remains uncertain. Department store chains like Sears and J.C. Penney are flailing, and shopping mall vacancies are the highest in seven years.

It used to be a no-brainer that anchoring a mall with a big-name department store like Neiman Marcus would be successful, but today the department store business is under extreme pressure. Retail has changed significantly since Hudson Yards was proposed. After the 12 years of planning and six years of construction it took to build the multi-billion-dollar development, big changes have occurred in the traditional mall-store business model.

Luxury retailers were once thought to be one of the safest sectors in the retail industry. Exclusive availability of luxury products drove department store business, but now those products are available online. Neiman Marcus and other upscale department stores are feeling the heat. Neiman has been beefing up its e-commerce and digital technologies.

In 2017, there was even talk of a possible sale of the company or its assets.

However, last month the company said it  reached an agreement with the majority of its lenders to extend debt maturities by three years, which will give it the time it needs to overcome its debt and turn the business around.

The agreement is with holders of more than 55 percent of the company’s term loan and 60 percent of its unsecured notes, representing more than $2.5 billion of the company’s debt. The company has been seeking to restructure its debt since at least 2018. It has a $2.8 billion loan coming due in 2020.

The transaction would extend the loan maturity to 2023, subject to conditions, and its unsecured notes to 2024.

“This transaction provides substantial value to our lenders and creates ample runway to execute on and complete Neiman Marcus Group’s transformation plan into a luxury customer platform,” van Raemdonck said in a release.

The company says its recent restructuring will reposition Neiman Marcus as a more digital-oriented and experiential retail. The company hired two new executives in February to help build a luxury customer platform and develop the store experience.

The company’s debt load has little to do with its operations and is primarily due to private equity buyouts that left it dealing with major debt.

The company was purchased in 2013 by Ares Management LLC and the Canada Pension Plan Investment Board for $6 billion. They acquired the chain from TPG Capital and Warburg Pincus LLC, which purchased Neiman Marcus for about $5 billion in a 2005 buyout.

“Their online business is fine. It’s really their Last Call (its off-price store concept) and some of the other decision-making,” Hebert says.

The company pulled back the reins on its Last Call concept, closing some locations in 2017.

“Now the balance sheet is a totally different thing,” Hebert continues. “We’re kind of at the end stages of the negotiations they that they’ve been having on and off with creditors. The whole purpose is really to stretch out the maturity schedule by about three years, so as opposed to facing obstacles beginning in 2020, now they can start facing obstacles beginning in 2023, which is not an immaterial victory for the company and for the creditors as well.”

“The agreement that they formulated will give them the time that they need,” says Debtwire analyst Philip Emma. “It doesn’t change anything in terms of how they operate. It doesn’t make the situation operationally different on the execution side, but it buys some time.”

Hebert says, ideally, as the company moves through the next year or so—and after its recent launch of its Hudson Yards store—capital expenditures will come in. “Ideally, they’re doing a little better about managing their inventory, so they’re freeing up a little bit of cash—not with great speed—but they start paying down a little bit of the debt,” he says.

Hebert also points out that Neiman Marcus faces a maturity wall issue rather than one of liquidity or debt service.

“From the balance sheet standpoint, they’ve got ample liquidity, and the issue for them was one of more a maturity schedule issue vs. an ability to service the debt issue, because they generate enough profitability through the vast majority of the cycle to be able to service their debt,” he says.

Will the retailer turn things around?

“It’s hard to say,” Emma says. “They clearly are the market leader in the luxury department store space, but at the same time, the challenges that they have are the same that every brick-and-mortar retailer has,” including losing to online sales.

But Emma says the company has the “framework it needs to reverse the deterioration” that it has experienced in its business over the last few years.

“In the last four to five quarters things have improved, but they’re not nearly where they were several years ago in terms of cash flow generation,” Emma says. “They have the agreement that gives them the time to do that. They’ve laid out a plan that they think they can executive to achieve that. Whether they can achieve it… time will tell.”

CreditRiskMonitor has pegged Neiman Marcus as financially distressed, with an elevated chance of bankruptcy.

Moody’s put Neiman Marcus as a default, and the retailer made Fitch Ratings’ “Top Loans of Concern” list in January, which indicates a significant risk of default.