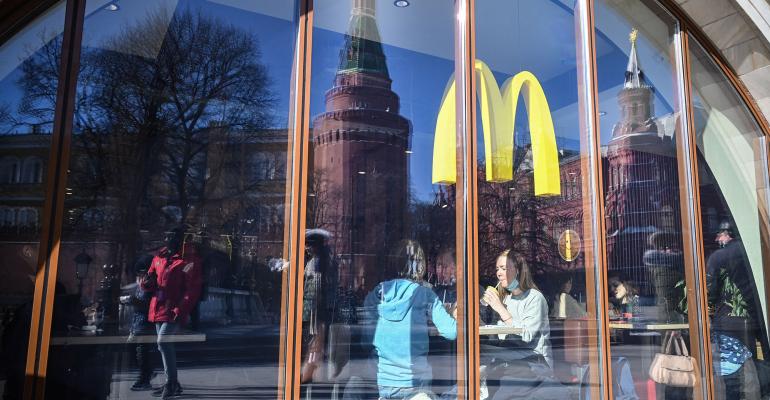 The departure carries huge symbolic as well as economic weight because the fast-food chain was one of the first Western brands to set up shop in Russia in 1990.

(Bloomberg) -- McDonald’s Corp. said it will pull out of Russia after more than 30 years of operation in the country, stepping up the corporate response to the invasion of Ukraine.

The departure carries huge symbolic as well as economic weight because the fast-food chain was one of the first Western brands to set up shop in Russia when it opened a branch in Moscow’s Pushkin Square in 1990, just before the fall of the Soviet Union. A reported 30,000 people lined up at the restaurant on its opening day.

“McDonald’s and Russia have become so intertwined that it seems impossible to imagine one without the other,” Chief Executive Officer Chris Kempczinski said in a note to employees Monday. “And yet, unfortunately, that is where we are today.”

Companies in the business of selling food and other essentials, or with large store networks in Russia, were initially more reluctant to pull out of the country entirely after the war in Ukraine began.

McDonald’s has initiated a sale process after temporarily closing its restaurants, the company said in a statement Monday. It expects to take a write-off of $1.2 billion to $1.4 billion for the move.

The fast-food chain said the humanitarian crisis in Ukraine and the resulting unpredictable operating environment meant it was no longer tenable to operate in Russia, “nor is it consistent with McDonald’s values.”

McDonald’s is pursuing a sale of its entire portfolio of restaurants to a local buyer and will “de-arch” the outlets, removing the McDonald’s name, logo, branding and menu, though the company will retain its trademarks in Russia. The company didn’t name a potential buyer.

Earlier Monday, French carmaker Renault SA agreed to transfer its 2.2 billion-euro ($2.3 billion) Russian business, including the producer of the Lada brand, to state entities for a symbolic sum in what amounts to a nationalization.

McDonald’s had said in March that it was temporarily halting business in Russia, where it employs 62,000 people. The decision then came after days of criticism on social media and backlash from investors.

Russia is among the chain’s biggest company-owned markets with close to 850 stores, just behind Australia, the UK, Germany, Canada and France. Unlike many restaurant peers, which franchise in Russia, the majority of McDonald’s locations in Russia are owned and operated directly by the company, making the exit complex.

‘I Don’t Want to Sell to an Oligarch’: A CEO on Exiting Russia

The day-to-day business of running the restaurants in Russia has become ever more difficult for McDonald’s amid US and European sanctions and retaliatory measures from President Vladimir Putin. Higher commodity prices sparked by the conflict has created further headaches on top of pre-existing inflationary measures.

McDonald’s said in April that the suspension of operations in Russia and Ukraine resulted in a $27 million expense in the first quarter to continue paying salaries, leases and supplier obligations. The company also said at the time that about $100 million in inventory was expected be thrown away due to temporary store closures in the region.

The chain said it will continue to pay local staff while it seeks a buyer. It reaffirmed its forecast for the current year and said it expects operating margin to be in the 40% range as a result of the Russia charge