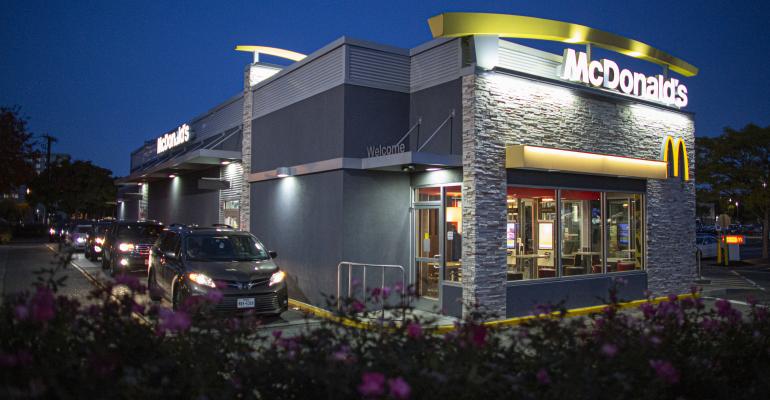 McDonald’s is likely to take a big hit on income in 2020. But owning its real estate empire should be a big help.

The Golden Arches have lost some of their sales sheen during the coronavirus pandemic, but the real estate strategy of McDonald’s Corp. might serve up a bit of respite from an economic grilling.

McDonald’s reported April 8 that overall same-store sales dropped 22.2 percent in March, with U.S. same-store sales falling 13.4 percent. Globally, three-fourths of the chain’s restaurants are still open. But they’re depending largely on drive-through and delivery sales, as most dining rooms are closed. Foot traffic at McDonald’s restaurants in the U.S. plummeted 32.1 percent in March, according to Placer.ai, whose platform tracks retail activity.

Despite those negative figures, McDonald’s real estate strategy remains a positive—a positive that could help it navigate choppy economic waters. However, McDonald’s is already grappling with rent deferrals for franchisees and, according to one projection, could see global income from rent take a $800 million dive in 2020.

Billions of dollars in rent

McDonald’s real estate strategy centers on owning much of the property—land and buildings—for corporate-controlled and franchisee-controlled restaurants. Last year, McDonald’s collected $7.5 billion in rent from franchisees, which operate more than 90 percent of the company’s restaurants around the world. That $7.5 billion represented a little over one-third of corporate revenue in 2019.

In its 2019 annual report, McDonald’s said it “believes that ownership of real estate, combined with the co-investment by franchisees, enables us to achieve restaurant performance levels that are among the highest in the industry.”

In other cases, a restaurant company might own and operate all of its locations, but it leases the real estate from a third-party landlord. Therefore, that company’s fortunes go up or down based on sales, Maguire says.

“The McDonald’s model insulates the company from the business risks inherent with operating a restaurant,” he says. “If a McDonald’s franchisee experiences a dip in sales, that franchisee still owes rent to McDonald’s. If that franchisee’s location fails, McDonald’s can try to line up a new tenant for that location, or simply sell or lease the land to someone else for a different use.”

Lease terms for most McDonald’s restaurants last 20 years. These agreements include rent escalations and renewal options.

“Decades of strong brand visibility and robust sales have enabled McDonald’s to become the real estate behemoth that it is today,” he notes. “However, the McDonald’s model is not easily replicable by other restaurant chains—few, perhaps none, of which have enjoyed the enduring power of the Golden Arches.”

In 2019, sales at McDonald’s nearly 38,000 restaurants around the world topped $100 billion. Based on the number of locations, McDonald’s ranks as the world’s second largest restaurant chain (behind Subway).

Is real estate a ‘minimal’ cushion?

For McDonald’s, an investment-grade Fortune 500 company, the balance toward owning versus renting “will have minimal effect on their ability to withstand a downturn,” Blankstein says. However, he acknowledges this conservative approach better positions McDonald’s compared with some its rivals.

Whatever the case, it’s hard to dismiss the advantages of McDonald’s real estate structure, especially now.

Unlike McDonald’s, its competitors that control their real estate, such as Wendy’s Co. and Jack in the Box Inc., lease most of that real estate, according to an April 8 research note from St. Louis-based investment bank Stifel Nicolaus & Co. Inc. Therefore, restaurant companies like Wendy’s and Jack in the Box might seek rent concessions from their landlords during the coronavirus pandemic and then pass along savings or deferments to their franchisees. By contrast, most of McDonald’s franchisees must turn to the franchisor for rent relief, Stifel Nicolaus points out.

Jack in the Box controls an estimated 87 percent of its franchised real estate, compared with McDonald’s at 79 percent, Wendy’s at 27 percent and Pizza Hut at 2 percent, according to Stifel Nicolaus.

In the end, McDonald’s unconventional arrangement with franchisees enables it to produce some of the highest margins in the industry as well as a predictable cash flow, Stifel Nicolaus analysts write.

Taking a hit on rent

Some of that cash flow could be obstructed, though. Stifel Nicolaus predicts global rental income at McDonald’s will decrease by about $800 million in 2020 due to lower sales during the coronavirus pandemic, or roughly 10 percent year-over-year.

Rent deferrals could drain even more from that income pool, according to Stifel Nicolaus.

In an April 9 letter to McDonald’s franchisee Blake Casper, chairman of the independent National Owners Association for McDonald’s franchisees, Joe Erlinger, president of McDonald’s U.S. operations, wrote that the company has taken a number of steps—such as deferring three months of rent, beginning in March—to ease the financial burden on franchisees.

“And if sales are substantially reduced, that [debt] just becomes more difficult every month. Plus, you’ve got all your other bills to pay,” he adds.

In an April 7 letter to Erlinger and McDonald’s President and CEO Chris Kempczinksi, Casper complained that the company wasn’t supplying “meaningful” financial relief to U.S. franchisees and questioned the fast-food giant’s commitment to franchise owners, particularly when compared with other restaurant chains.

Adams says McDonald’s franchisees that fail to pay their rent altogether could wind up being kicked out of their properties and ultimately losing their franchises.

“The courts have always stood up for the property owner if a franchisee isn’t paying their rent. So that gives [McDonald’s] incredible power,” Adams says.