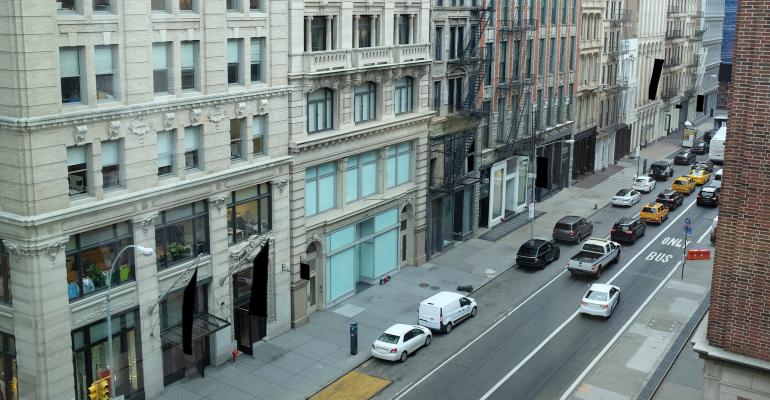 Even with new businesses signing leases, retail rents in Manhattan continued to fall in the first quarter, reports Cushman & Wakefield.

(Bloomberg)—Retail rents in Manhattan have continued to fall even as new businesses sprout up and vaccines spur optimism for a return of shopper traffic.

Soho again was the hardest-hit market in the first quarter, with average asking rents falling 20% from a year earlier to $279 a square foot, according to a report by Cushman & Wakefield. Recent long-term leases by luxury retailers failed to put a dent in supply: About 30% of the district’s retail space is up for grabs.

Lower Fifth Avenue, running from 42nd to 49th streets, and Madison Avenue each saw rents decline more than 15% during the quarter as stores went empty. Madison Avenue had the biggest increase in supply, with the availability rate hitting 40%.

“The bad news is that first quarter of 2021 is showing the true impact of the pandemic on the market,” Steven Soutendijk, an executive managing director at Cushman & Wakefield said in an interview. “The good news is that landlords are responding and adjusting rents even further downwards to spur leasing.”

Manhattan’s key shopping corridors took a pounding over the past year as the Covid-19 pandemic forced hundreds of stores to close. Ongoing social-distancing measures and a dearth of tourists and office workers continue to hinder sales. Some areas, such as Times Square, are seeing an uptick in foot traffic now as the weather warms and vaccines encourage people to venture out.

Upper Fifth Avenue -- a luxury-leaning stretch, from 49th to 60th streets -- was an exception to the trend. The availability rate there declined from a year earlier, to 20%, the brokerage said. New leases included Gucci’s renewal at Trump Tower, and Mango’s sublease at 711 Fifth Ave. Still, rents were down 8.6% to $2,389 a square foot.