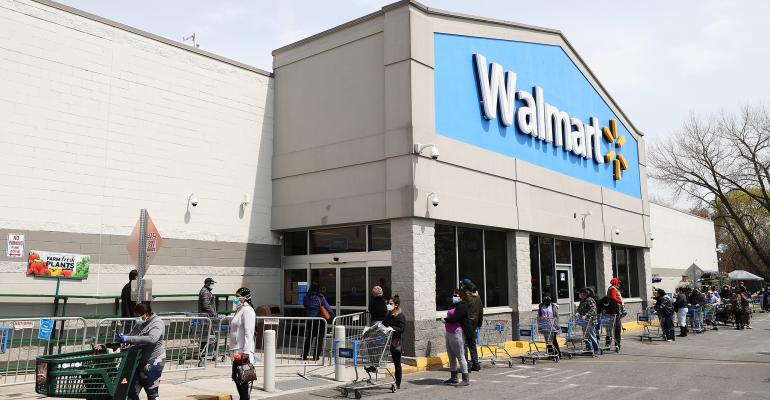 (Bloomberg)—The top two trade groups representing major retailers such as Walmart Inc., Target Corp. and Best Buy Co. are calling on governors to adopt uniform reopening standards as the pandemic subsides, including allowing warehouses and distribution centers nationwide to reopen all at once, rather than state-by-state.

As states, cities, and companies big and small struggle over when and how to restart the economy, the Retail Industry Leaders Association and the National Retail Federation have some ideas. On Monday, they’re sending a six-page memo to governors outlining a three-phased plan for how stores can maintain public safety once they are allowed to reopen their doors to customers. The guidelines call for stores to have “robust” health and safety protocols in place, including sanitation and social-distancing procedures.

Measures include ensuring regular handwashing, use of gloves and face masks to protect customers and employees, in addition to limiting occupancy in some cases “to no more than 5 customers per 1,000 square feet of shopping space,” or half the national fire code requirement.

The retailers recommend that stores defer to governors on timing. States have been making those decisions by evaluating whether the number of new infections is declining and whether testing is adequate to prevent upticks in new cases.

“The governors have a difficult decision ahead of them,” RILA president Brian Dodge said in an interview. “We want to demonstrate to them that when they decide to restart the economy in their states that retailers are prepared” to keep their customers safe.

The retail trade group is adding to the growing number of industry voices seeking to influence how and when the government permits normal business to resume as the coronavirus shows signs of plateauing in some regions. Businesses and policy makers have struggled to coalesce around a single strategy to save the struggling U.S. economy and minimize the spread of the disease.

President Donald Trump earlier this month unveiled a reopening plan that puts most decisions in state hands. The president recommends that states document a “downward trajectory” in cases of coronavirus and flu-like illnesses for two weeks before beginning a three-phase process to curtail lockdown and social-distancing rules.

Under RILA’s proposal, all states should allow retailers’ warehouses to open so long as they follow the Centers for Disease Control and Prevention’s social-distancing, hygiene and sanitization guidelines. Many states have already adopted this policy, Dodge said, so that retailers can offer in-home delivery and curbside pickup.

The memo cites the need for “a fully functioning supply chain with all distribution centers operational,” rather than piecemeal reopenings, which could prevent goods in warehouses in locked-down states from moving to stores in states that have lifted their restrictions.

RILA said currently most distribution centers are open since federal guidelines call for treating them as essential. Some have been shut down in states where local orders conflicted with state directives or in states where warehouses didn’t house essential goods, including in Indiana, Missouri, Massachusetts, and Colorado, RILA said.

The first phase should also allow pickups and in-home deliveries, the memo said. These operations should allow a limited number of employees in stores that are closed to the public “to fulfill online orders and deliver purchases to customers who drive or walk up, observing appropriate social distancing,” according to the memo.

In the second phase, the memo from RILA and NRF said states could permit more stores to open while establishing safety guidelines, such as ensuring that employees stay six feet apart when practical, establishing special shopping hours for high-risk individuals, and limiting the number of customers in a store at the same time.

In the third and final phase, the states would eliminate pandemic-related shopping restrictions but stores would maintain certain cleanliness standards, such as requiring employees to wash their hands often and disinfecting high-trafficked spaces.

Dodge said the trade group based its proposed safety guidelines on existing state regulations, recommendations from the CDC, and safety measures that stores that have remained open already adopted.

Notably, RILA’s memo avoids some of the trickiest questions facing governors, such as how to coordinate store and school reopenings. If schools stay closed, stores that call workers back might find themselves short-staffed.

States have varied widely in their approach to determining when and under what circumstances normal business and social life can resume. Georgia Governor Brian Kemp, one of the last governors to issue a statewide shutdown, on Friday allowed nail salons, hairdressers, bowling alleys and gyms to reopen. Kemp said shops must follow safety protocols, but some Democratic mayors -- and even Trump -- said he was moving too fast.

Other governors are emphasizing the need to conduct widespread testing to minimize a second round of infections. New York, for example, is building a “tracing army” with thousands of workers to track the origin of individual cases and reduce the virus’s spread so the state can focus on reopening, Governor Andrew Cuomo has said. The state is also working with neighboring New Jersey and Connecticut to increase testing.

Likewise, Pennsylvania Health Secretary Rachel Levine said on Saturday that testing and isolating people who are positive will be “very very important” for reopening. She said the state will be “ready this week,” ahead of a partial reopening, and is planning to trace people who have come into contact with an infected person.

RILA isn’t the only trade group trying to shape states’ reopening plans. The Business Roundtable, which counts the chief executives of major U.S. companies as its members, has also urged a phased reopening, with the states coordinating with the federal government.

In an April 24 letter signed by Walmart CEO Doug McMillon, the group’s chairman, the roundtable suggested testing and health screening of employees in accordance with CDC guidance, and in some cases as a condition of entering the workplace.

The U.S. Chamber of Commerce has also issued a document it said was meant to spur discussion of such issues as employer liability over health privacy, securities litigation and safety issues.

--With assistance from Bobby Magill and Keshia Clukey.

To contact the reporters on this story: Naomi Nix in Washington at [email protected];