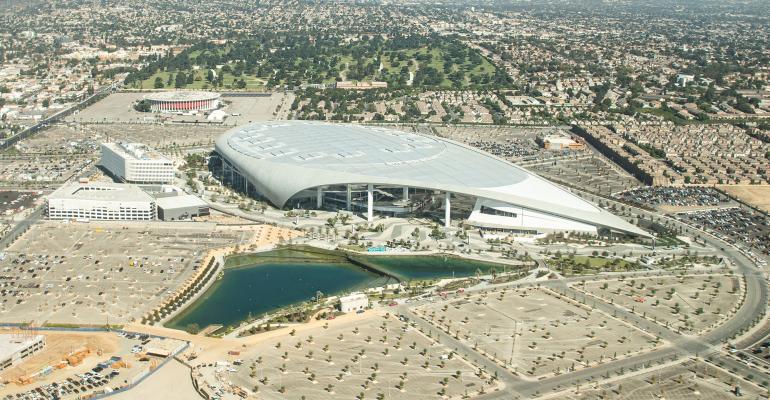 Kroenke and Ballmer Bet on Crowds in Biggest LA-Area Project

Ballmer is planning to break ground this fall on a new 18,500-seat basketball arena for his L.A. Clippers.

They’re building the biggest new urban development in the western U.S., with Kroenke’s $5.5 billion SoFi Stadium as its centerpiece. The National Football League stadium -- home to the Kroenke-owned Los Angeles Rams and the rival Chargers -- opened in the middle of the pandemic, with no fans in its 70,000 seats.

Across an artificial lake, Ballmer is planning to break ground this fall on a new 18,500-seat basketball arena for his L.A. Clippers. In between, the first phase of a massive retail, office and apartment complex is racing to complete construction.

As California reopens after one of the country’s strictest Covid-19 lockdowns, the development will test people’s willingness to get out and shop, watch a game and share the air with roaring crowds. In a hopeful sign for the project, more than 50,000 baseball fans have packed Dodger Stadium for games since the state’s June 15 reopening, the biggest gatherings in Los Angeles since before the pandemic.

“People feel they survived a traumatic event and they’re coming out of it and we’re right on target,” said Chris Meany, whose firm Wilson Meany is the development manager of Kroenke’s Hollywood Park, about 12 miles (19 kilometers) southwest of downtown L.A., in the city of Inglewood. Wilson Meany is also building Ballmer’s future arena, a neighboring but separate project.

Next month, SoFi Stadium will have its first full-capacity event, a live DJ performance by Kaskade. The Rams will play the Chargers Aug. 14 in the stadium’s first NFL pre-season game with fans filling the stands.

Nearby, construction crews are hammering away at a 314-unit apartment complex and a 380,000-square-foot (35,000-square-meter) retail center. Future tenants include an Iconix Fitness gym and Cinepolis movie complex, businesses hit hard by the pandemic.

The master plan for Hollywood Park, a former horse-racing track more than a third the size of New York’s Central Park, calls for as many as 2,500 residences, a 300-room hotel and as much as 5 million square feet of office space. The lone vestige of the property’s gambling history is the Hollywood Park Casino for poker and other card games.

Meany declined to disclose the total price tags for the two projects, which are being built without government financial support.

With the arena, Ballmer is giving the Clippers their own home, ending two decades of sharing with their National Basketball Association rivals, the Lakers. The former Microsoft Corp. chief executive officer also agreed to pay $400 million last year to buy the nearby Forum -- the Lakers’ former arena -- from New York Knicks owner James Dolan.

At Kroenke’s project, a new 6,000-seat performance hall that shares the football stadium’s sweeping canopy debuts this summer. It will be named YouTube Theater, under a naming rights deal announced Monday. Offices housing the NFL’s West Coast headquarters will also be ready for occupants around the same time.

No other big office tenants have signed leases yet, but interest in the space has perked up since California’s reopening, according to Meany. The outlook wasn’t always rosy.

“We were incredibly exposed,” Meany said. “The amount of people and money and effort that has gone into one of the largest undertakings in the country, to suddenly feel like the bottom had fallen out of the economy was unsettling.”

When complete, Hollywood Park will add approximately 50% to the tax base in Inglewood. It’ll be a boon for the city of 106,000, which fell on hard times in the 1990s when earthquakes and race riots rocked the area and the Lakers and the Kings of the National Hockey League decamped for the new Staples Center in downtown Los Angeles, which is also the Clippers current home.

“This is a total reconstruction and rebirth of a city that was known as the City of Champions,” he said.

With the Clippers playing in the NBA Western Conference finals this year for the first time ever, championships are a plausible dream. As the pandemic recedes, the long-term prospects for Inglewood hinge on the popularity of the teams.

To contact the author of this story: John Gittelsohn in Los Angeles at [email protected]