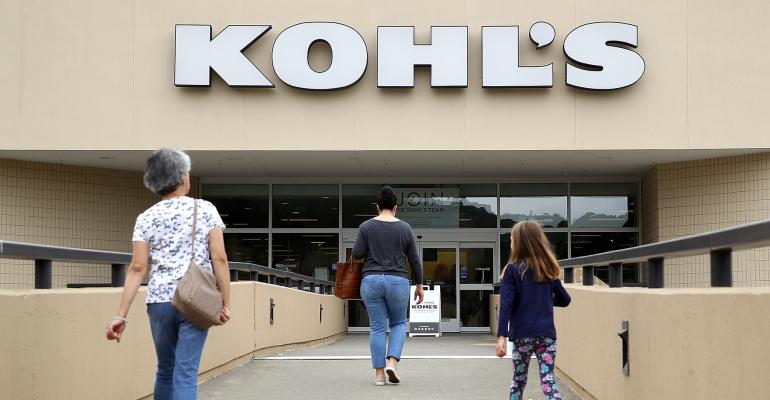 The department store chain is pushing against a group that seeks to name nine of its board directors and chain its inventory strategy.

(Bloomberg)—Kohl’s Corp. said it rejects attempts by a group of activists “to seize control of our board and disrupt our momentum,” pushing back against a group that seeks to name nine directors and overhaul the retailers’ inventory. The shares pared some of their earlier gains.

“We are well underway in implementing a strong growth strategy and accelerating our performance,” the company said in a statement on its website, adding that its plans already include several of the initiatives the activist investors are proposing. Other plans, it said, “would not be accretive to shareholder value.” The company pointed to sequential improvements in recent quarters as evidence that its strategy is producing results.

The statement signals tensions with the group, which holds a combined stake of about 9.5% and has called on Kohl’s to reduce inventory and quit its “dizzying array of promotional gimmicks.” In a statement Monday, the investors, which include Macellum Advisors GP LLC, Ancora Holdings Inc., Legion Partners Asset Management LLC and 4010 Capital LLC, said the board lacks retail experience and has limited ownership of Kohl’s shares.

“Poor retail execution and strategy have led to stagnant sales and declining operating margins,” the group said. “The board has overseen a long list of sales and margin-driving initiatives which have created no meaningful value for shareholders.”

The activist slate of nominees includes Marjorie Bowen, who had a nearly 20-year career in investment banking at Houlihan Lokey; David Duplantis, a former executive at Coach; and Thomas Kingsbury, who serves on several other retailer boards.

Kohl’s pushed back on the criticism of its directors, saying it had replaced half of its board with six new independent directors since 2016. The board will engage with the activist investors, the company said.

The investors earlier this year nominated the potential directors to join Kohl’s 12-person board, according to a person who asked not to be identified. The board effort and the size of the stake were first reported Sunday by the Wall Street Journal.

Like other major U.S. retailers, Kohl’s has struggled amid the pandemic, which hurt back-to-school sales as many students remain homebound. However, Kohl’s shares have rebounded since its disappointing third-quarter earnings report, more than doubling since mid-November.

The activists are looking to place experienced retailers on the board to work with Chief Executive Officer Michelle Gass. With the right team and strategic plan, Kohl’s could generate more than $10 a share in earnings within a few years, the group said. That would be roughly double its performance in fiscal 2020.

The investors also want the company to consider a sale-leaseback of some non-core real estate. Kohl’s could unlock as much as $8 billion of value through real estate transactions, the group said.

Even before the pandemic, Kohl’s had experienced difficulties. It logged about a 1.3% drop in total revenue in the year ended February 2020 -- right before Covid-19 hurt foot traffic at U.S. stores. As Kohl’s raced to roll out socially distant services like curbside pickup, shoppers last year increasingly shifted their dollars away from department stores to internet giants like Walmart Inc. and Amazon.com Inc.

In the critical holiday period, Kohl’s total revenue dropped 10%, preliminary results show -- though that’s better than the chain’s performance at the height of the pandemic. It will report results for the most recent 12-month period in early March.

In a bid to differentiate Kohl’s from its peers, many of which are based in traditional malls, Gass has tried several out-of-the-box ideas, including becoming a drop-off point for Amazon returns. In December, it announced a plan to open Sephora shops inside at least 850 Kohl’s locations by 2023 to attract more customers.

--With assistance from Jordyn Holman.